So far the two latest Radeon models have been good, if unexciting. The HD7970 and HD7870 are both excellent cards and time hasn't detracted from their viability as a gaming GPU. In part the reason we felt so average about them was the knowledge that they were the scouting party before the arrival of the main force, the R9 290X. Thankfully the time to dispense with the past has come, and the Radeon R9 290X is upon us. The latest iteration of the Graphics Card Next philosophy from AMD is here, and has been met by the release of the GTX780Ti, so the battle lines have definitely been drawn. Are nVidia right to be worried? Is the R9 290X a GTX780 killer and ready to take the crown as the fastest single GPU on earth?

The first thing that catches our attention is unquestionably the introduction of the Hawaii GPU Core. The Tahiti was outstanding, giving us some of the highest results we'd seen at the time of launch. As with anything there is only a finite amount of tweaking and tuning that you can do before you need to seek new architecture entirely, and with the GTX780 handily beating the HD7970, AMD really needed to hit back with a vengeance and the Hawaii core is just the tool for the job.

There isn't only a new graphics card to talk about either, as the release of the R9 290X coincides with AMD's Mantle API. We know that PC gaming is often held back because of the relative lack of performance from the consoles when compared to a gaming PC, and with the Playstation 4 and XBox One homing into view with their AMD APU's there has never been a better time to provide developers with a harmonised set of low-level instructions to ensure that console gamers and PC gamers both get a product that pushes their systems as hard as possible.

As always we've a lot to get through, especially with an entirely new GPU, and we know you're all itching to click through to the 3D Mark scores and the conclusion. So let us crack on.

With a 50% increase in transistors, nearly 800 extra shaders and double the fill rate of the Tahiti, it's clear that AMD have introduced a big step up with the R9 290X from their current top model, the 280X/HD7970. On paper at least the performance potential is excellent, and we can't wait to see how this bears fruit in our benchmarks. 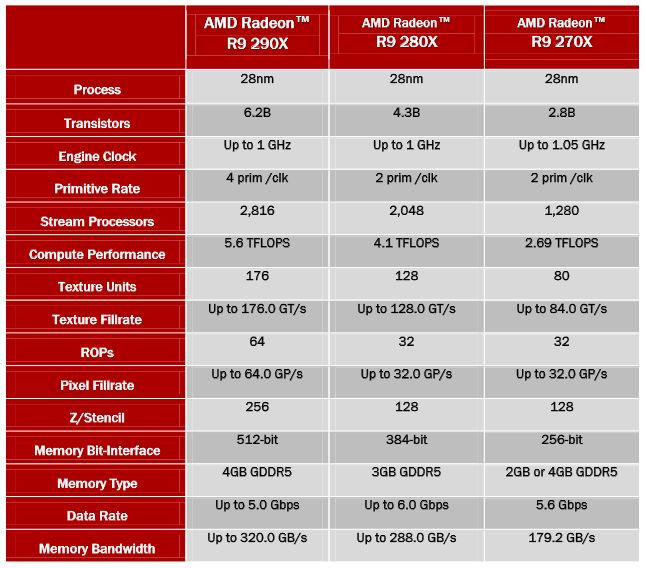 Excalabur50
What a shame like everyone else i suppose i was really hoping this card was gonna be a beast and to be let down like a lead balloon....... sigh! Lets just hope AMD get their finger out their asses and let the 3rd party vendors loose and see if they can pick them up again so it's a least a half decent card and sooner rather than later!!Quote

CapitanoMal
Well Guv? Time to go get an MSI 780? Need a new card pretty badly.
Edit: or I could pull the trigger on getting one and watercooling that puppy....Quote

kittysniper
Thanks for the review, but I think its hardly fair to compare it to oc cards, it seems to compete well against stock titan and 780s, but amd really the bed on the cooler, though I cant complain seeing how much cheaper it is to titan and 780; would love to see another review when asus's direct cu II triple slot rog version come out, I bet it will give the titan oc/780 lightning a run for their money

Xrqute
Well it'll be interesting to see what it can achieve once the 3rd party water blocks hit the market which i dare say wont be long! but at the temps its running you'd want to be running dual loop so it dosen't effect the cooling of your other components to much.Quote

CapitanoMal
Pretty sure the EK block is out already.Quote
Reply