Packaging and Initial Impressions
The Zotac ION ITX package arrived in a fairly simple but well decorated box with a general orange and black theme. A similar theme is continued as I opened the box finding it's contents. The size of the box along with internal packaging held all of the contents in a very secure fashion and as a result everything inside was in pristine condition. 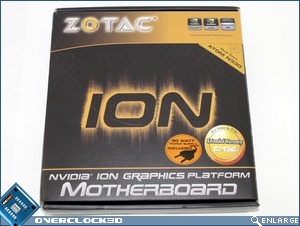 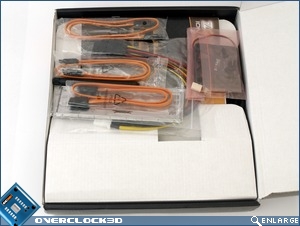 As shown, the included accessory list is fairly comprehensive and contains everything that you need to get started. A multilingual manual, Driver CD, 90W Power Brick (Made by Delta Electronics), Wireless Antennae, I/O Shield, 80mm fan, 3 SATA cables and 3 SATA power leads fed from a molex header on the motherboard. 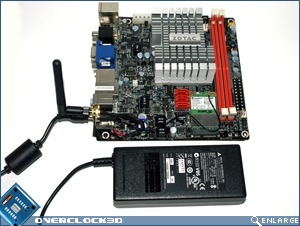 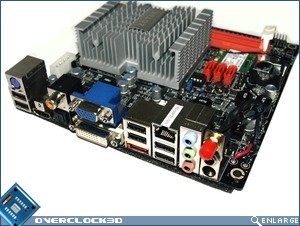 Here we have the ION motherboard in the flesh. I'd just like to point out that it's power supply is no larger than a standard laptop's charger so this should help you put the true size of the motherboard into perspective! This feature rich motherboard has been very intelligently put together, allowing so much to fit on a PCB area of just 17cm x 17cm. I particularly liked the easy access to the vertically mounted CMOS battery as well as the Mini PCI-E slot, both of which are placed to the left hand side. 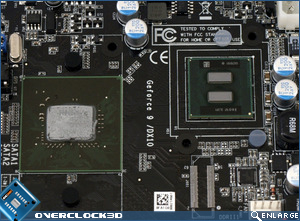 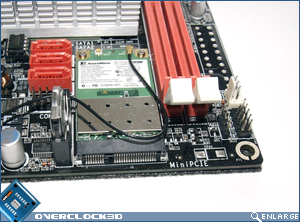 Also observe that the nForce 7 MCP and Intel Atom CPU is cooled by the same Heatsink cooling unit. Upon removing the cooler, the chipset and CPU is now visible, the chipset to the left and the double die Dual Core CPU to the right. It's absolutely phenominal how small the Atom CPU's package footprint is. An adhesive thermal pad was fitted to the base of the cooler for the CPU, while thermal paste was used for the chipset. Not too much nor too little and the spread of it shows that the contact with the cooler is very good.
All in all, the Zotac ION ITX seems to have the right formula for a successful product but of course we cannot make such an assumption until we make a computer out of it and put it through it's paces! So here's the test setup:
Zotac ION 330 Motherboard
2GB Patriot PC2-6400C4 RAM
120GB Seagate Barracuda 7200.7 SATA HDD
LG DVD+/-RW SATA Optical Drive
Antec Fusion 430 mATX Case
Included 90W PSU
Panasonic TH42PZ80B 42” 1080p HDTV
Onkyo TX-SR606 AV Receiver
Physically, in terms of putting together the ITX system, the process was completely uneventful mostly due to the fact that there's very little to install in the first place! The motherboard booted first time and we proceeded to install Windows Vista Home Premium with an overall build time of just under 45 minutes. The installation of drivers were trouble free and the system was fully functional after a single system restart.
The BIOS
A simple system like this wouldn't really need much more than the ability to change boot priority, date and time surely? Zotac doesn't think so. The BIOS also seems to cater to the tweaker as well, offering the ability to use sets of RAM that require more than the JEDEC 1.8V spec as well as FSB overclocking and NB/FSB Strap. Music to my ears if I may say so and I'll return to the matter of overclocking towards the end of the review. 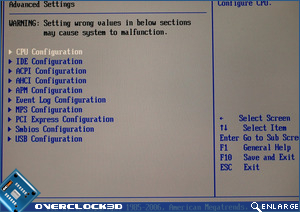 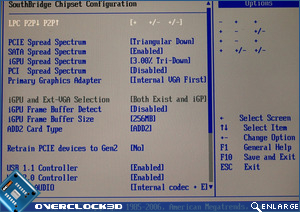 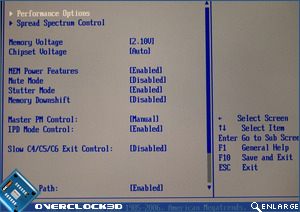 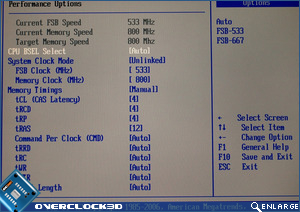 The BIOS’ layout is rather generic and common to a lot of other motherboards and hence it shouldn’t take any additional effort to get used to it. No abnormal behaviour was observed while applying settings such as a blank screen or CMOS Checksum Error. All in all, a very comprehensive BIOS for a motherboard of this type.
«Prev 1 2 3 4 5 Next»

Dunno if I would have been so generous with the marks being as tight as I am! I've never really grasped the point of mini pc's with so many good notebooks around now there just seems little point. A form factor to far maybe? For the price I would've liked to have seen a better cooling solution.

noobieocer
i prefer mini itxs over laptops for home use becuase simply i hate how laptops get so hot and toasty. while mini itx temps can change depending on how you cool it.Quote

Sounds like an awesome mobo for ur htpc, full web and office needs.

Imo u/OC3D should install WoW on them. Not on any fan basis, but it's the single game those who intensely do the above would be likely to play otherwize. (hardcore fps'ers generally have gaming rigs, WoW u can play on a laptop) I am surprized there's no WoW benchmark tool for these purposes - argument being it isn't testing, but from the experience I get - "can u build me a pc, I do this'n'this - oh and play WoW", generally that's it.

I'd be interested if the dc adapter has the balls to grow with the oc over a period.Quote

Mul.
Quote:
The graph doesn't indicate a passive load as the temperatures simply didn't settle and continued to rise under passive conditions. That said, the ambient temperatures, the airflow in a HTPC environment and the tough Linpack test were major contibuting factors and in other situations it may have functioned fine. To an extend I also agree with your sentiments about Mini ITX, particularly due to it's pricing. After all, £175 would buy a much faster CPU/Motherboard/Graphics/PSU combo in ATX flavour!

Many thanks for the feedback

Quote:
Also a fair point. The Zotac was placed in a HTPC environment and I feel that this is particularly where it excels especially if space is a major concern. The Atom CPU will always be a limitation of the platform and personally, that would make me think twice before downsizing my own HTPC to something like this.


Quote:
I would say that the DC adapter would probably be okay in the longterm with the mild overclock as the Atom CPU itself consumes a very small amount of power and without being able to raise it's Voltage, I doubt I could get power consumption to rise that much. There was however scope to add one more optical drive or hard disk drive, which may have affected power supply performance more. Interesting thought about the use of WoW though. Cheers for the feedback

tinytomlogan
Very nicely done dude. Been looking into mini itx myself. This mobo wouldnt suit me, but a great informative review.Quote
Reply