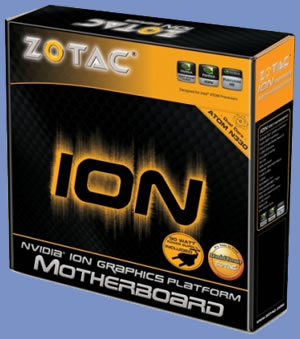 With the rising popularity of the Intel Atom in cheap laptops, a number of brands have cottoned on to this and have begun to offer Net-Top Computers. Low power desktop computers that satisfy the large market of users that require systems for web browsing, word processing, organisational needs and general media playback. Examples of these include the Asus EEE Box, which have flown off the shelves with their paltry £200 pricetags. As time moved on3, a number of motherboards began to trickle into the DIY retail market with Intel Atom CPU's embedded into them. So here's our question for the day. Do embedded Mini ITX solutions have the guts to satisfy todays average PC user? Today we'll be putting one of today's Atom ITX options to the test. The Zotac ION 330 ITX Motherboard.
Zotac is very much the new kid on the block compared to most other manufacturers such as Asus and Gigabyte. Initially, just an Add In Board (AIB) partner of nVidia based graphics cards, they have diversified and begun to add motherboards to their portfolio. Zotac's motherboard range mainly consists of entry level and media centre based solutions but they offer a wide range for both Intel and AMD users in Mini ITX and Micro ATX form factor. Certain motherboards in particular such as the GeForce 9300-ITX motherboard, a Mini ITX LGA775 motherboard featuring a full size PCI-Express 16x slot was very well received by reviewers and end users alike so it'd be interesting to see what we make of this comparably elaborate looking product.
Though some of you might be wondering why we're reviewing something that's in essence an entry level solution? There must be something special about it surely? Well yes, there is. This is the first Intel Atom Mini ITX motherboard to hit the market with the much more capable nForce 7 MCP, featuring Direct X 10 GeForce 9400M graphics. It doesn't end there as Zotac have managed to fit 3 x SATA ports, integrated WiFi by Mini PCI-E, full size 240pin DDR2 DIMMs, 6 x USB ports, e-SATA, three different video inputs (DVI, HDMI and D-Sub) and even an embedded power supply solution with a passive 90W transformer brick. What's more is that the motherboard is shipped with the dual core version of the Intel Atom 1.60GHz CPU.
Intel Atom Embedded Dual Core CPU @ 1.60GHz
Hyperthreading Technology
2 x DDR2-667/800 DIMMs
1 x Mini PCI-E (Occupied)
MCP7A Chipset
GeForce 9400M Based “ION” Graphics (DX10, 256mb Shared, 1.10GHz Shader, 16 Stream Processors)
10/100/1000 Gigabit LAN
3 x SATA 3.0GB/s
1 x eSata 3.0GB/s
6 x USB 2.0 External
4 x USB 2.0 Internal
1 x HDMI (HDCP w/ 7.1 Digital Audio)
1 x DVI
1 x Analog VGA
802.11n Wireless
90W Power Supply Unit
Aluminium Heatsink and 80mm Fan.
It all sounds rather impressive so let's move on to the next page where we unleash the mini beast....
«Prev 1 2 3 4 5 Next»

Dunno if I would have been so generous with the marks being as tight as I am! I've never really grasped the point of mini pc's with so many good notebooks around now there just seems little point. A form factor to far maybe? For the price I would've liked to have seen a better cooling solution.

noobieocer
i prefer mini itxs over laptops for home use becuase simply i hate how laptops get so hot and toasty. while mini itx temps can change depending on how you cool it.Quote

Sounds like an awesome mobo for ur htpc, full web and office needs.

Imo u/OC3D should install WoW on them. Not on any fan basis, but it's the single game those who intensely do the above would be likely to play otherwize. (hardcore fps'ers generally have gaming rigs, WoW u can play on a laptop) I am surprized there's no WoW benchmark tool for these purposes - argument being it isn't testing, but from the experience I get - "can u build me a pc, I do this'n'this - oh and play WoW", generally that's it.

I'd be interested if the dc adapter has the balls to grow with the oc over a period.Quote

Mul.
Quote:
The graph doesn't indicate a passive load as the temperatures simply didn't settle and continued to rise under passive conditions. That said, the ambient temperatures, the airflow in a HTPC environment and the tough Linpack test were major contibuting factors and in other situations it may have functioned fine. To an extend I also agree with your sentiments about Mini ITX, particularly due to it's pricing. After all, £175 would buy a much faster CPU/Motherboard/Graphics/PSU combo in ATX flavour!

Many thanks for the feedback

Quote:
Also a fair point. The Zotac was placed in a HTPC environment and I feel that this is particularly where it excels especially if space is a major concern. The Atom CPU will always be a limitation of the platform and personally, that would make me think twice before downsizing my own HTPC to something like this.


Quote:
I would say that the DC adapter would probably be okay in the longterm with the mild overclock as the Atom CPU itself consumes a very small amount of power and without being able to raise it's Voltage, I doubt I could get power consumption to rise that much. There was however scope to add one more optical drive or hard disk drive, which may have affected power supply performance more. Interesting thought about the use of WoW though. Cheers for the feedback

tinytomlogan
Very nicely done dude. Been looking into mini itx myself. This mobo wouldnt suit me, but a great informative review.Quote
Reply