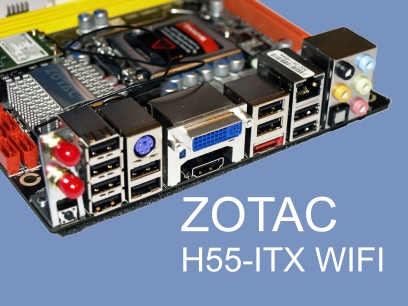 Synthetic bandwidth results of around 12GB/sec are an indication of both fast memory and a capable CPU Memory Controller. We are pleased with the result

A HDD Read speed of around 90MB/sec is a typical result for our Samsung Spintpoint F1 drive.

Everest Ultimate Edition's memory testing suite determines the performance of your memory and your system's memory controller. Both Read and Write operations are tested.

As previously exhibited, the Everest Memory Read and Write benchmarks seem to be less optimistic as far as bandwidth figures are concerned. Rest assured however that these are very good results

HDTune analyses the performance and health of your Hard Disk Drive. It's comprehensive test will determine minimum, maximum and average transfer rates.

These figures are in line with those achieved with other H55 motherboards and also equivalent AMD Socket AM3 motherboards. We are generally impressed by the H55 chipset's I/O performance.

Diablo
Really nice looking board. I love the mini itx form factor, but am always stumped by fitting a graphics chip as the powersuplies aren't built to take them. This one looks very good for a media PC, or for a mini gaming box.

With the GMAHD from the CPU, will it handle basic media duties like bluray as its 9300 predessecor would?Quote

Athan
Nice review. However you didn't mention anything about board's limitations like the confirmed by Zotac incompatibility with any PCI-E device except a graphics card. So useful add-ons like TV-tuners cannot be used with this motherboard.

Other known issues are lack of turbo boost support on first production batch and waking from S3 problems with most PCI-E video cards. So far all these issues remain unfixed.Quote

I've found the Core i3/i5's Integrated GMA to be a considerable step up from predecessors such as the GMA950. Performance wise, it is most certainly up there with the GeForce 9300 and Radeon HD 4200 and should not really struggle with HD Video.Quote

Diablo
That's good to know. It would certainly make life easier not having to find a suibtable, low power GPU, finding a way to power it and cool it etc.

If I were going to do an HTPC build (not on the cards right now thanks to my debit cards just melting) that's certainly good news.Quote
Reply