Specifications
Today we're going to be taking a look at TCC's current top of the range "Clocked Gamer Quad" model. Based around an Antec 900 chassis and fitted with a pre-overclocked Q6600 CPU, the system certainly sounds well spec'd. However, as many of us will already know, a lot of system builders tend to cut corners in other areas. So let's check out the full system spec of the unit sent over to us today and find out just what makes it tick...
System Specification

• Antec Nine Hundred Gaming Case
• Intel Q6600 Clocked to 3.3Ghz - 3.4Ghz
• Arctic Freezer 7 Pro CPU Cooler (MX 2 Thermal Compound)
• Abit IP35 Pro Motherboard
• Crucial Ballistix Tracer 2GB PC8500 DDR2 RAM
• ATI 3870 X2 1GB Graphics Card
• OCZ StealthXStream 600w Power Supply
• 500GB Western Digital SATA Hard Drive
• DVD Writer
• Floppy Drive
• Stability Tested under Prime95 & 3DMark06 for 8 hours
• 12 Months Warranty
• Technical Support
• Built by time served PC Technicians
Obviously the first thing to catch our eye in the specs is the rather nice 1Ghz overclock that TCC have given the Quad-Core Intel Q6600 chip. This is much better than the conservative 200-400mhz overclock that most manufacturers give on their pre-oc'd machines; and is most undoubtedly thanks to the extensive 8hrs of stability testing that TCC give every machine before it's shipped out to the customer. TCC have also done away with the Intel stock cooler in favour of the well respected Arctic Freezer 7 Pro coupled with high quality Arctic Cooling MX2 compound.
On the memory front, TCC give customers the opportunity to choose between either Crucial Ballistix or Corsair Dominator modules. We went for the former, and our system arrived fitted with the rather sexy and extremely overclockable 2GB Ballistix Tracer PC2-8500 kit. Disappointingly, if you opt for a memory upgrade to 4GB; TCC will simply slap in an additional 2GB memory kit (occupying all four slots) rather than switching to a 2x2GB. This has the disadvantage of costing a fairly steep £54.99 while also requiring the PC's overclock to be lowered slighly to maintain stability.
Both the graphics card and motherboard are components that we rate highly here at Overclock3D, and although TCC haven't made any attempts to overclock the Powercolor branded ATI 3870 X2, there really isn't any need to take the card above its stock speed due to it already being an insanely fast graphics card right out of the box.
The power supply used inside the Clocked Gamer Quad is also worthy of a mention, with TCC opting for the OCZ StealthXStream 600w. While most PC builders see the PSU as an opportunity to save money, TCC have recognized the importance of high quality PSU and have chosen a unit that is both quiet and well featured.
Finally, should anything go wrong with this nice little bundle of hardware within the one year warranty period, TCC will arrange to have the base unit (or faulty components) collected and replaced at no charge to the customer.
Appearance
While some system builders go for outlandish modification techniques to help distinguish their PC systems from the stock PC cases, TCC have chosen what could quite possibly be described as a pre-modified case. Featuring a clear plexiglass side window along with a 200mm fan mounted in the top and two blue LED fans at the front, the Antec Nine Hundred chassis is well ventilated and inoffensively stylish.

The top two 5.25" bays at the top of the case are fitted with an unbranded DVD-RW drive and a floppy disk drive respectively.  This leaves a further single 5.25" bay free for installation of an additional drive without having to sacrifice one of the 120mm fans stealthily mounted behind the meshed drive bay covers. Of course, should you really need it - up to nine devices can be installed in the drive bays. 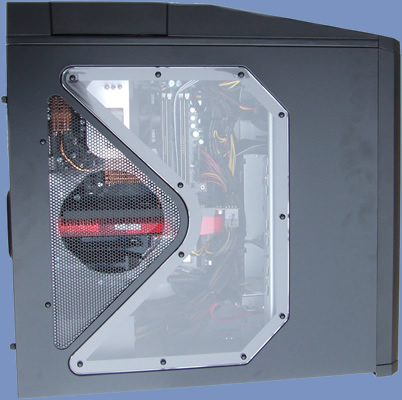 Through the cases side window we can see that TCC have paid a great deal of attention to the systems internal appearance. All cables from the PSU and drives have either been neatly tucked into hidden areas of the case, or have been bundled together using cable ties. Aside from the aesthetic advantages that this level of cable tidying has, the airflow inside the case should also be significantly improved with no wires obstructing the fans.
The Bundle 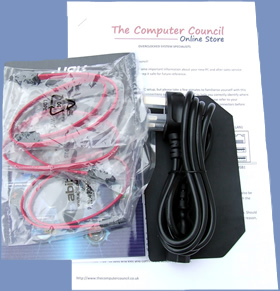 While some manufacturers bundle in Printers, Scanners and Digital Camera's in with their systems, TCC has kept thing extremely simple, only providing us with the things we need to get the system up and running. Over on the right we can see the Motherboard manual, Mains power cord, three spare SATA cables and a rubberised mat for the Antec case.
Normally we'd skip straight past things such as the boring manual, but the A4 printed leaflet included with the Clocked Gamer Quad is most definitely worth a read as it provides details on how to restore the TCC overclocked settings should the motherboard ever get reset to default factory settings.
Our system came pre-loaded with Windows Vista Home Premium (which adds an extra £65 to the price tag) and providing that you opt for an OS to be installed at the time of purchase, the Clocked Gamer Quad also comes with a small selection of software including: Open Office, Nero Essentials 7 and a 30 day subscription to NOD32 Antivirus. While this may seem a bit tight, it's a breath of fresh air when compared to the whole host of junk you often find installed on PC's from Dell and Sony.
Those of us wanting a complete PC system will also need to choose a TFT screen and mouse/keyboard combo at the order stage. Most of the options are actually very well priced  with a 22" TFT coming in at  £149 and a cordless Logitech mouse and keyboard at just under £20. TCC have also informed us that their "Clocked" range also includes a free 2GB Kingston USB flash drive.
«Prev 1 2 3 4 5 6 7 8 9 10 Next»

ali_james
Nice review there, I like what you've done comparing it to a stock system. Really shows what a good O/C can do for performance.

Respect to TCC, nice rig with a great, sensible spec. It shocks me how some companys fool nubs with the stupid sales tricks by throwing in "extreme dx10 gaming with sli" with poorer cards such as a pair 8600's when a much better single card solution is a mere £30~£40 more. Good call on the psu aswell, I'd be horrified to buy a high end rig with a cheapy psu in it.

Cheers for the read

Nick R
Does this mean there will be more full PC reviews?

I agree with what you said about the website as well, it just lacks the right feel.Quote

ionicle
looks like a good system, personally, i wouldnt give up the fun of building my own for a prebuilt, even if it does have such a nice spec, and an overclock, but its gotta be good for beginers, or gamers who dont wanna know about hardware...Quote

JN
Cheers for the feedback guys

This is indeed the first in what will hopefully be a fairly long line of system reviews. We've got some gaming notebook reviews coming up soon, so look out for those.

But as always, we're not gonna slacken off on the cutting edge hardware reviews

Seems we have found another good contact.Quote
Reply