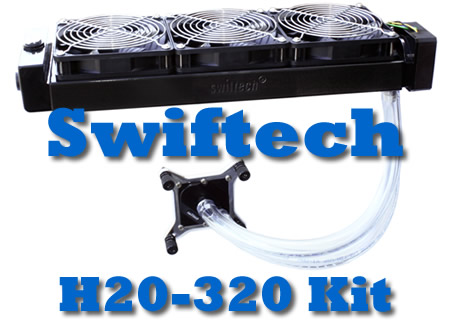 If you are an avid watercooler then Swiftech is a name you should know well, for those of you with more feline characteristics it may surprise you to find out Swiftech started life producing air heat sinks for CPU's. It really hit the big time way back in 2001 with the MC370 range of heat sinks. Looking back at these now most of us have better cooling on our mosfet's let alone our CPU's but its great to look back and see how far technology has advanced our hobby.

Watercooling became a focus for Swiftech just a year later, so Swiftech has been in the PC watercooling industry for nearly 10 years! Over the years they have continued to bring out well priced and great performing products. The kit on test today is aimed at beginners or people that are looking for a basic upgrade without the worry of having to connect up may different parts in their system. Anyways lets move on for a look at the discription and kit specifications.

The H20-X20 "Edge" series liquid cooling kits represent a true revolution in the world of liquid cooling. In effect, for the first time ever they combine Swiftech's extreme performance features with an ease of installation and a versatility that will allow all users, beginners and hard core enthusiasts alike to take full advantage of all the benefits afforded by liquid cooling.

Each kit is composed of only two elements:

The graph for the 3rd test is where only the big boys hang out, 200x22 @ 1.45v. Only the premier league of coolers hang out here. Its an extreme test for extreme situations, definitely not your average overclock or volts being used but it helps to whittle down the men from the boys. Its also worth noting that the XSPC kit was actually at a higher voltage for this test and yet still remains the best performer.

A surprising conclusion? I think so. I'm going to say this straight off the bat, with the Apogee XTL block and the MCP35X coupled with the 360mm MCR-320 radiator I had expected more from this kit.

Lets recap though because this kit does have some positive points. It is very easy to set up because you basically only have 2 parts, the rad and the CPU block. Hook these up together what ever way suits your system and that's it job done. The kit comes with everything you could need for mounting it on or in your case too. Short of a bottle of distilled water you wont need anything else to get this kit set up and running. It may take a bit of planning to get things looking tidy and I would whole heartedly suggest you put some thought into this stage. Do it right it can look great, rush it and you'll end up with a complete mess and a birds nest of wires in the bottom of you case.

Now I did find a few issues, first one is the price. £255? It would have to be epic for this price and yet the XSPC kit I tested previously that was over £100 cheaper beat it in every single temperature test. The MCP / DDC pumps are renowned for needing damping when fitting to a case. Without it the noise from the pump resonates into the case and can create a hell of a racket. Swiftech have appeared to have neglected to address this point when bolting the pump to a thin walled metal radiator. The pump noise just gets amplified down the radiator body as it would a case making it incredibly annoying. Some kind of thick gasket needed to be designed for this application to make it much quieter, especially when it's almost made to be run outside of your case. Talking about it being outside your case, the wires just look terrible. There's no excuse for the lack of braiding OR clean black wires now, the wires on the fans also need to be longer for external use in my eyes.

So basically we have an expensive kit, that's noisy and can not compete thermally with a kit that's £100 cheaper. The XSPC kit may require a little bit more time and thought but its really just a few more hoses. If you can fit two on the Swiftech kit then you are capable of fitting a few more with another kit.

It's not very often we are quite so blunt with a conclusion but our advise would be give the Swiftech kit a very wide berth, get over to Specialtech and buy the XSPC kit and save yourself the £100 and be happy knowing you've bought a much better kit.

Thanks to Swiftech for the sample on test today, you can discuss your thoughts in our forums.

with such a big delta on the low volts i didnt expect it to make it to the 1.45v test tbh

on paper this kits looks great, shame it fell at the last hurdle :|Quote

jonowee
For two less tubes?... no thanks, now please take my money for a XSPC RX kit.Quote

dugdiamond
is it me, or is the 'rad mount block' a 120mm fan housing? i have a few of them, from a very old 'monster' server case