Nvidia have just released the 780a chipset for AMD users and OC3D have been lucky enough to grab a board so we can take a better look at the latest and greatest from Nvidia. The board itself is an Asus Crosshair II which will have a full review of its own in the very near future and I will be referencing the board throughout but for now I want to give you a full run-down of the new chipset, its features and what new goodies it brings to the table.

Nvidia are no strangers to battling the CPU giants for chipset superiority, they have been waging war for years now and have been fighting battles on both fronts against Intel and AMD providing a worthy alternative. In the good old days, the nForce4 chipset even reigned supreme during AMD's heyday as it was an overclockers wet dream. Gamers were also supplied with the ability to SLI their high end GPU's and thus the 'Ultra gaming platform' was born. Nvidia were in pole position but somewhere along the line they lost the path of righteousness and thus nForce 5 and more recently nForce 6 were a very hit and miss affair, very akin to Marmite - you either loved it or you hated it. With nForce 7, Nvidia hope to turn back the clock and re-live a time when they were the teacher’s pet and shake off the 'unreliable', 'incompatible' shackles that have plagued the last two chipsets and are also keen to point out the 780a is a very different beast to the 780i, its Intel compatible sibling. 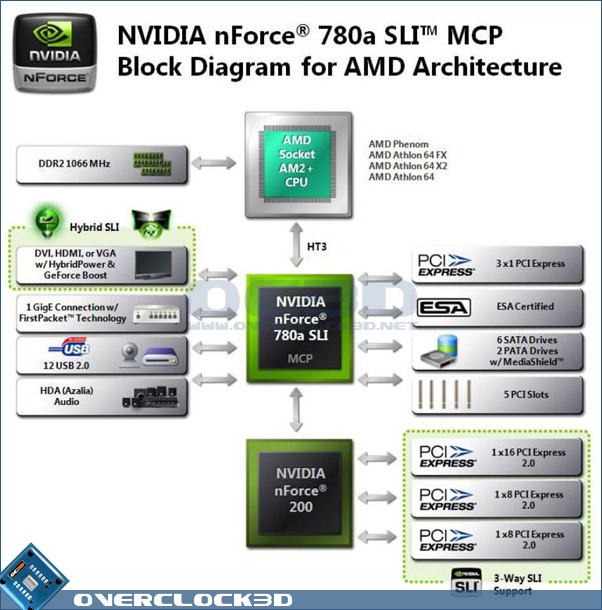 The 780a chipset is clearly aimed at the high end AMD enthusiast and have deployed every marketing strategy in their repertoire, hoping to lure users away from the AMD flagship 790FX based motherboards which is its main target. Obviously the most prominent attraction to the 780a is the ability to run 'TRI SLI' but looking beneath the skin of this new beast there is much more than that to distinguish the new chipset from any other.

w3bbo
Cheers m8. Was a bit of a challenge but Jim steered me in the right direction

I was socked about the onboard VGA actually being able to run games let alone be playable.Quote

w3bbo
Yeah and I'm enjoying it more than I thought I would tbh. Especially when you get some solid backup from the more experienced reviewers here at OC3D

Tis a very nice board, I just wish we could have exploited it more....but that comes later