Any time a new Intel launch is on the horizon there is a flutter of expectation and excitement that runs through the OC3D offices. It's not a particularly rare occurrence but so rarely have Intel fluffed their lines that we can't help to be eager to find out the level of performance that will soon be gracing our systems.

This is particularly true with the new hardware that will release on the 5th of October. The last big Intel release is the X299 setup which, although the stuff of dreams and desires, is financially beyond many of us. However, the quad-core range that started with Sandy Bridge and has moved all the way through to the current i7-7700K is the one that most of us own and use, and therefore an update to this is an update to the biggest seller. Intel have taken the opportunity of the Coffee Lake-S CPU release to increase the cores from four to six. But we're getting ahead of ourselves. First we need something to put it in.

Enter the Z370 chipset. Still utilising the LGA1151 socket, but without backwards compatibility, it has all the high end features that have found their way into modern hardware. USB 3.1, M.2, the full monty. MSI have taken this new chipset to new heights with the release of their flagship model, the MSI Z370 Godlike Gaming. We'll have a full review soon, but for now let's have a shuftie at the headline elements.

Any time you name a motherboard something so lacking in subtlety as Godlike, you are setting a level of expectation that you better meet before snarky journalists come along and give you headlines such as "Godlike? It's barely a choir boy!" or whatever trite phrases they can come up with. Fortunately for MSI, and indeed our own pun-meter, the Godlike is replete with all the technologies that you could hope to find on a modern motherboard, and in quantities hitherto unseen. Fast memory, oodles of storage options, three LAN connectors, WiFi, RGB lighting, the whole shebang. 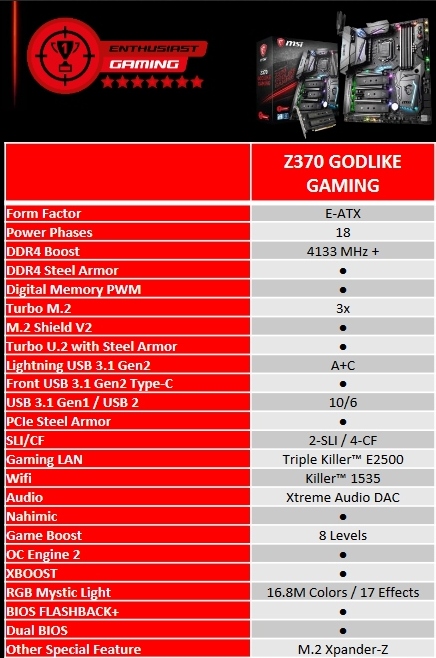