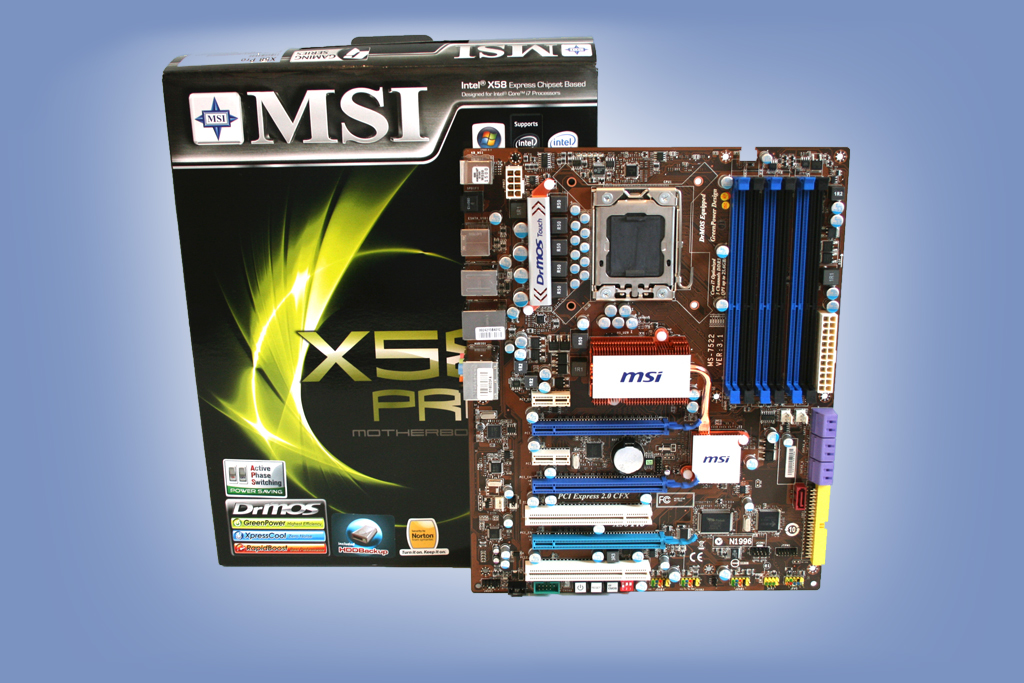 Making the leap to Intel latest chipset meant that you either had the GDP of a small country or were involved in some very suspect criminal activity. How else could you afford a new Motherboard, new RAM, new CPU, all at 'new tech' prices not to mention the inflated costs because of the economic downturn? The MSI X58 Pro has now made entry into the latest and greatest socket set that little bit less painful thanks to undercutting most of it's competition by over £40. With DDR3 prices tumbling and CPU prices surely to follow suit, you no longer have to wear a pinstripe suit and carry around your 'tommy gun' in a Violin case.

So where's the catch? Truth is this motherboard does not have the ludicrous amount of features the high end boards have, nor does it (officially) support SLI, only cCossfire (more on this later). It does however, have everything you need to get you going, 6 RAM slots, 6 SATA ports, 3 PCIe slots etc that you would find on most X58 boards. It is, from the outset at least , a no frills budget board. All to often now we are seeing the word 'pro' which is misleading as pro should mean feature packed, high end but in reality it is now associated with basic/budget rather than the term 'professional'. For the top of the line boards, it seems a derivative of a precious metal or Solar event is more appropriate.

Here's what MSI have to say about their latest addition to their X58 range of motherboards:

MSI, the world's leading mainboard manufacturer, today announced its most affordable one of X58 mainboard, X58 Pro. It offers an innovatively new architecture that adopts the latest Intel® X58 Express chipset that supports the latest Intel® Core i7 processor, along with ultra-high bandwidth QPI (Quick Path Interconnect) transmission system and high-speed 3-channel DDR3 memory, resulting performance so extreme that has ever seen in mainboards. X58 Pro also has utilised the Gen.2 DrMOS, which introduced exclusively by MSI since the P45 series, improving its power efficiency more than 93% to bring best performance.

The following specification was taken directly from MSI's website:

The features of the board, while not range topping, are very good for a motherboard of this price.There's plenty of room for upgrades too with a well chosen expansion slot configuration. Let's head over to the pictures of the boards itself...

zak4994
I guess this is for people who don't care about looks and want a cheaper alternative.

The opposite of this would probably be a bloodrage in terms of aesthetics and price.

And its pretty good

Rastalovich
I don`t think the esthetics of the mobo should be equally graded as performance. If u have a mobo that works 100% faster than the one that looks "kewl", u'd be a tad foolish to pick the slower one cos the memory slots glow in the dark.

I was gonna slate all the other cards on the list, cos quite frankly I feel this mobo embarasses the lot of them in terms of pricing.

They all peak and trough in various areas, but they don't all cost £50-60 more than this.

No SLI ? Think I could live with that.

Great little board at a price point that motherboard manufacturers should be working downwards in price from. The market is going to die unless others follow MSI's price trend.Quote
Reply