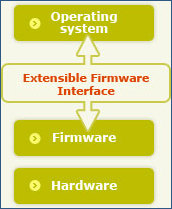 The BIOS has been used by motherboard manufacturers for what seems like decades. It's the mysterious place that the average user wouldn't dream of entering, but where hardcore overclockers and enthusiasts alike seem to spend their lives.

As computers get more and more advanced, the BIOS gets more and more cramped, with pages full of options and readouts. With all the advances in every area of the PC, it's about time the BIOS got an upgrade - enter EFI.

EFI stands for Extensible Firmware Interface, and was first introduced in the server industry, where the BIOS was seen to be too restrictive.  Now that this new type of firmware is coming to mainstream/desktop boards, MSI were kind enough to send us a sample of one of their boards loaded with the EFI firmware.

EFI is essentially a processing layer between the BIOS and the OS. The BIOS system is still used to power on and POST the system, but then the EFI takes over and provides a slick user interface.

EFI offers a number of improvements over a standard BIOS. Input is no longer limited to the keyboard, and the mouse/cursor is now used for input and navigation, making it much quicker and easier to access the setting you want. EFI also uses a full graphical user interface (GUI), with buttons and drop-downs, allowing the developer to tinker and tweak it in many more ways, as well as presenting data in a far nicer way.

EFI also has much more opportunity for expansion when compared to the legacy BIOS. Some recent Asus motherboards have shipped with Express Gate, which enables access to the internet and files in a few seconds. MSI have shown similar possibilities with EFI, with a Messenger and web browser in the pipeline, as well as many other add-ons. This internet access through the firmware also has other plus points - no longer do you need to go into Windows to download the latest updates, but simply download them from within EFI.

Enough of the small talk, read on to find out how it performs.

Kerotan
Wow, that looks pretty cool, I've got expressgate on my P5Q-E and it would be good if someone released something which was like a combination of the two, it's great being able to check something on the net in a hurry without booting into windows.Quote

AntiHeroUK
I've actually had this on my MSI P45 Platinum for a couple of weeks. It's extremely simple to use, and it looks great. I'm interested to see how they will develop this for the future. What it really needs now is an Internet browser

Luigi
Quote:
Ooh, thats interesting.. What did you use to flash yours? Following the MSI instructions instructions didnt work on ours (it came pre-flashed, but we tried a dummy flash to test it worked)?Quote

AntiHeroUK
I used a memory stick on which I had installed DOS so I could boot from it. Then I put the BIOS files on the stick, powered on, booted from stick and typed msiflash "bios name" /p. It worked it's magic and I rebooted.

Luigi
Quote:
oooh, MSI dont mention that... where do you get the dos for the mem stick?Quote
Reply