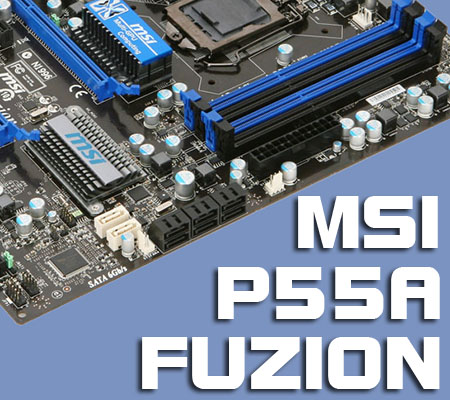 With the recent introduction of USB3 and SATA3 and the way that they have found their way onto pretty much all new motherboards released, we thought we'd be waiting until the next round of hardware (X59 or whatever) before we saw anything change. Certainly any major leaps forward rather than an extra LAN port or similar.

However MSI have introduced a theoretically fantastic piece of hardware that will allow you to use both an ATI and a nVidia card on the same system. The Lucid Hydra chip which means that this P55a motherboard gets the "Fuzion" subtitle. If you'll recall the Lucid chip was first used on the MSI Big Bang P55 motherboard, but like all first versions of such radical hardware it was beset with problems. So this vastly updated version is likely to make or break the Lucid HYDRA concept. But we'll be looking closer at Fuzion in a couple of pages.

So for now, we know this is a P55 motherboard with all the stuff you'd expect, but one enormous trick up its silicon sleeve. Of course as this comes complete with the OC Genie that we awarded our Innovation award to when we tested the P55 GD85 then it isn't just a bog standard P55. So let's see what we have.

As you can see from the specifications, the real talking point of the MSI P55a Fuzion is the inclusion of the Lucid LT22102 chip. We can barely contain ourselves in anticipation of putting it on the bench rig and getting down and dirty.

tinytomlogan
Quote:
They have put loads of work into making it work. There has been lots of driver fixes so if the support continues the future does look bright.Quote

tinytomlogan
Quote:
Dont think AMDFTW has found the front page of the site yet