The popularity of the AMD Ryzen processors and their chipsets really cannot be overstated. Whilst Intel still has the large part of the market share there was a time when AMD was in danger of becoming a footnight along with Cryix Processors or Rendition Verite graphics cards. Not only did the introduction of the Zen architecture revitalise AMDs fortunes, but rapidly proved the model adopted by enthusiasts everywhere, whilst also putting the frighteners upon Intel with their 'first to market' PCI Express 4.0 support.

With DDR5 on the horizon and AMDs quest to ensure they remain at the forefront of the enthusiast market they have brought out an updated version of their current flagship X570 chipset in the form of the X570S. Whilst we usually find slender updates to be distasteful the benefit of the X570S is that there isn't enough new that if you've just invested in an X570 motherboard it feels immediately obsolete, nor is has their been a sufficient price hike that those who have been saving up for a Ryzen-based system have had the goalposts moved beyond their reach.

The motherboard we're showing you today is the MSI MAG X570S Torpedo Max. Whilst it might be cutting edge there are elements to it that remind us of the old days, in a good way. So without further ado let's show what the Torpedo Max is bringing to the party.

The keen eyed amongst you will spot that the X570S now has two PCIe 4.0 slots instead of the single one that was on the original X570 motherboards. With beefed up USB options sitting alongside faster DDR4 support, it's adhering to the old 'bigger, better, faster, more' adage of revised hardware. The other major change to the X570S when compared to the X570 is the use of passive cooling on the chipset. On the X570, with PCI Express 4.0 being new, AMD took a belt and braces approach and used a fan to keep things cool. Despite having another PCI Express 4.0 slot it's reliable enough to revert to passive cooling. 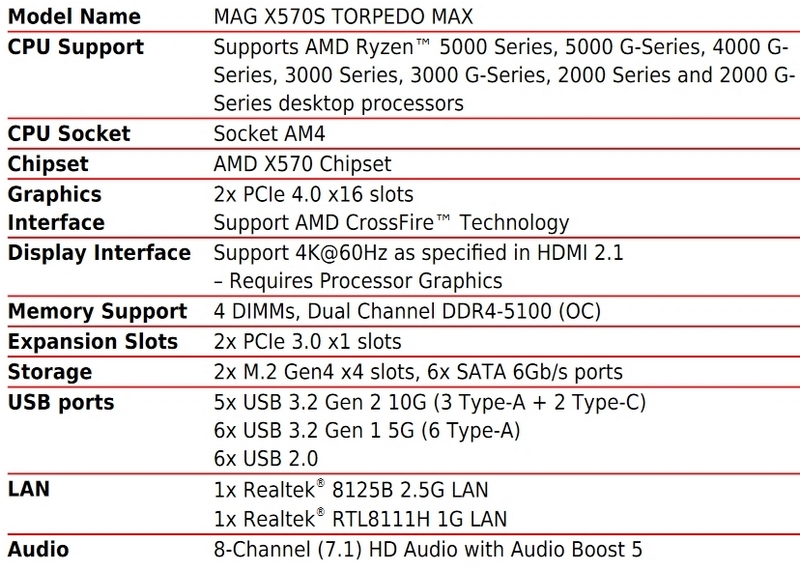