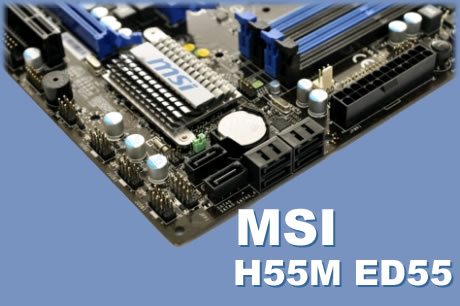 Several weeks have passed since the release of Intel’s line-up of Core i3/i5 Dual Core processors and thus far we are still sampling through an ever growing selection of H55/H57 motherboards to complement these new processors. Today we’ll be taking a look at MSI’s latest offering, the MSI H55 ED55 Motherboard.

Most of you will not need any introduction for this particular hardware manufacturer, who has specialised in the sale of motherboards and graphics cards for a number of years and have more recently expanded into the mass market with their affordable “Wind” series of sub £300 Netbooks.

So what’s so important about these H55 and H57 based motherboards? First and foremost, these are the first motherboards to natively support 32nm processors and include the appropriate onboard equipment to utilise its integrated graphics module. Second and most importantly, these motherboards should be the beginning of lower ownership prices for current generation Intel products. Let's examine the technical specification of our H55 ED55 motherboard.

In many ways, this motherboard has much in common with the Asus P7H57D-EVO motherboard that we previously reviewed and on that basis, we'll be pitching the MSI H55M ED55 directly against it in our testing process. Aside testing performance in general, we will also be evaluating the additional (and perhaps unique) features of the motherboard such as bundled software and tools.