We've regularly lauded Intel here at OC3D for their incredible performance. For a long while their top end models were the ones that you absolutely had to have if you wished for the highest possible performance from your desktop. With the advent of the Sandy Bridge CPUs, which then ran through the Ivy Bridge, the majority of users moved from having the Intel premium model to the 'next one down'. The cost/performance was so incredible that when the LGA2011 socket was released it was left in a bit of a void. Gamers and most desktop users were happy with their blistering quad-cores, and serious power users were utilising the Xeons.

The release of the i7-4960X redressed the flaws of the original LGA2011 i7-3960X and started to gain a little traction. However, the cost involved meant that it still wasn't quite different enough to justify the expense. The 4770K was still more than good enough for almost everybody, and the power users were still reliant upon the extra cores available on a Xeon CPU. In a lot of ways Intel were the victims of their own success. When the alternative is so brilliant, their top end processors just didn't offer enough to give the sales that we used to see from processors such as the i7-920.

With the introduction of the X99 chipset and brand new Haswell E Core i7-5960X, Intel has piled on the features and cores so that now there is absolutely no doubt which model stands as the flagship of their CPU range. Those of us who either require, or just plain want, the very best hardware that the market offers will be looking with desiring eyes at the Core i7-5960X and X99 combination.

There are, as we will see on the next couple of pages, a few changes to the whole package with the new Haswell E and X99 Chipset. But the headline grabbing features stand out so strongly that it would be ridiculous to talk about anything else.

Rather than a mere (!) six cores and 12 threads, the i7-5960X comes equipped with 8 CPU cores giving 16 threads to play with. If that doesn't have you reaching for your wallet, then perhaps the inclusion of support for DDR4 will do it. DDR3 has been part of our systems for so long that it seemed as if no manufacturer would take the plunge and be the first to apply DDR4 to their package. It's difficult to overstate how beneficial this should be to the performance capabilities of this arrangement, but also to us as consumers. What appears on the top end Intel will, in about a year, be on everything. 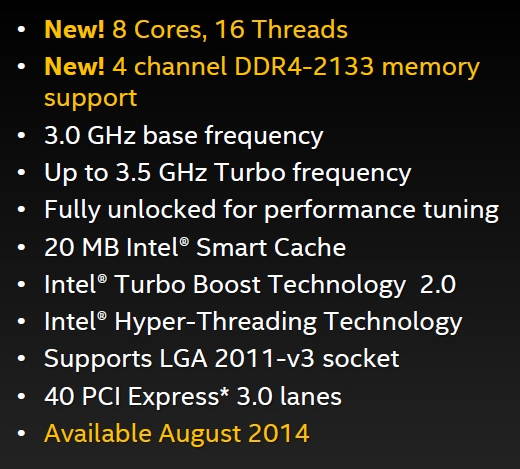 barnsley
I keep looking at the benchmarks and having to tell myself I don't need one.

I really want it :/Quote

Zoot
Gah, I don't think I'll bother with X99. I don't need 12 threads, and while affording it is a non-issue, I just can't justify spending nearly 1000 on a motherboard, CPU and 16GB of DDR4.

Performance on the other hand, particularly a workstation, there's no beating it. Although it's a pity the turbo frequencies are as low as they are though. The two 8-core Xeon E5-2687V2's that are in my workstation at work turbo up to 4GHz. No way Intel is going to sacrifice their huge margin Xeon business though.

NeverBackDown
Everyone wants it but doesn't that pricey premium

Wow Tomb Raider really benefits from the extra cores, Wish they would of done like they did with the last gen though, 4930K had the same cores as the extreme version.