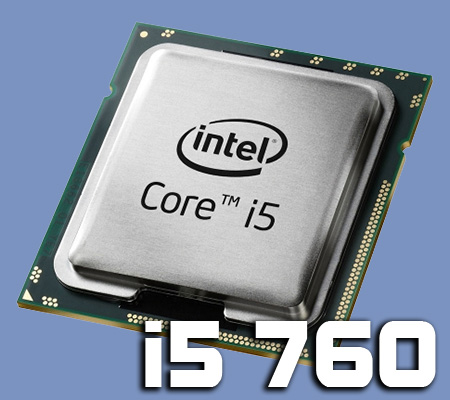 Intel's LGA1156 socket and subsequent P55 chipset were designed to be the low cost alternative to the LGA1366 X58 Core i7 platform. Although upon first release it sold in such enormous quantities that prices remained high it didn't take too long before it was possible to build a 1156 based system for a sensible amount of money.

It's actually become one of the best value platforms available, akin to the AM3 socket on the AMD side. It supports everything from the dual-core Pentium based G6950, via Hyper-Threaded Dual Core i5 6 series, the Quad Core i5 7 series all the way up to the Hyper-Threaded Quad Core i7 8 series.

There certainly is a processor for every pocket and application. Today we're looking at the latest model in the i5 range, the top-of-the-line i5 760.

If there is one thing that Intel can't be accused of it is making too great a leap forwards in their processors. While many sites such as Overclock3D and overclockers everywhere have shown that nearly every model in the range will happily run all day at 4GHz, Intel are insistent upon these tiny incremental clock speed increases. It has been the way since the original Pentiums and so it's unlikely to change now.

So from Intel themselves, here are the specifications for the Core i5 760.

As you can see the Core i5 760 is identical to the previous Core i5 750, barring a tiny increase in clock speed from 2.66GHz to 2.8GHz. At least this small increase doesn't come at a increase in price as most sites have them identically priced or in some cases the 750 is slightly more expensive.

tinytomlogan
Quote:
Naaa its in memorial to the moth that died

Bungral
You aint wrong about it needing bugger all voltage and running cool.

Tried to quickly chuck it up to 2133MHz with an overclock on the CPU of 4.26 GHz but at that voltage it only just booted into Windows.

When I've rebuilt my OS, I'll get some proper overlocking done on it.

not a bad little chip is it! Make sure you start a thread about your journey with it dude.Quote

Bungral
Yeah will do as soon as I've got the OS up and running how I like.Quote
Reply