When the new Intel CPUs were announced we were incredibly eager to finally get our hands on the seriously beefy range topping Core i9s. With the 10 core i9-7900 we had our first taste, and then the AMD 1950X Threadripper appeared with its 16 cores and 32 threads. It was an absolute beast at times, which makes today's review of the i9-7980XE and its 18 cores, 36 threads a particularly exciting time.

The "big" Intel CPUs have always managed to combine barely believable performance in heavy multitasking applications with good performance in the light benchmark tests thanks to a decent clock speed on the individual cores, rather than sacrificing everything on the altar of multicore performance.

It can't have escaped your attention that there are some politics and behind the scenes wrangling involved with the 1950X Threadripper at the moment, but we don't really care about that. We're all about performance. We know that is good, so how does a similar specification Intel compare. So drop your jocks and grab your socks, it's time to find out how the latest generation of Intel Core Skylake-X CPUs can handle the intensity of our fulsome benchmark suite.

We could spend ages discussion the subtleties of the Core i9-7980XE, how it has 44 PCI Express lanes, support for 128GB of DDR4 memory, but lets not kid ourselves we're all here for the 18 cores, 36 threads of sledgehammer performance. It's particularly worth noting that the base frequency is quite low, yet the Turbo Boost technology still breaks deeply into the 4 GHz territory with 4.2 GHz Turbo boost. 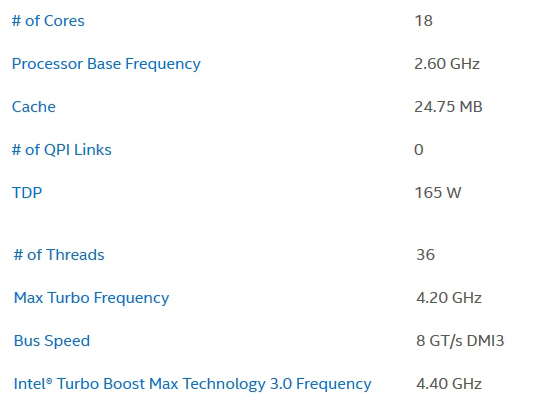 Korreborg
What a beast. And actually quite nice power numbers.
Anyone in search for a kidney???

WYP
Runs off to get a lotto ticket. :PQuote

AdmiralDonut
God damn. I should hope this thing is good, considering it costs 2.5 times what the Threadripper costs here in Germany.Quote

Eddie long
what a monster

, nice review Tom , and as you pointed out its a dream product , something to aspire too , or just lust over ,Quote
Reply