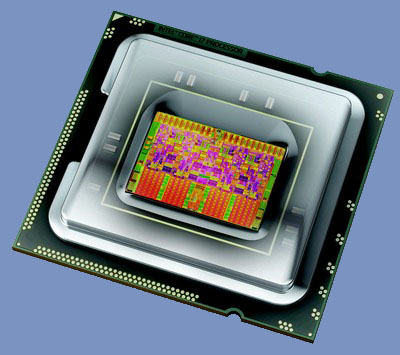 With AMD rapidly gaining ground on Intel, the pressure was on for them to keep the gap instilled by the Core2 series. The phenomenal success of the Core range has seen Intel race away from it's major competitor and despite AMD clawing some ground back recently, Intel have once again come up trumps with a revised CPU that will keep the hounds from the door and add yet another nail to the green coffin of AMD.
The revised Core i7 is even faster than before with a clockspeed of 2.93GHz with a stable overclock of 4.45GHz some 1.5GHz faster than stock which will no doubt please enthusaists and quash the rumours that the new chips are locked down with restricted overclocks. I would liked to have seen triple channel support as with the Core i7-9xx range as I feel the dual channel may prevent a lot of enthusiasts upgrading to the new i7 8 series, favouring instead the cheaper i5 range. Intel are keen to point out that the new i7 CPU still offers plenty of bandwidth for the end user but I still believe that utilising a dual controller is a step backwards.
However, the reasoning behinds Intels apparent madness is actually quite logical. By removing that extra memory controller and taking the QPI link and replacing it with the slower DMI, Intel are aiming more for the masses rather than the Ultra high end sector of the market. Because of the reduction in specification, Intel can lower the fabrication cost which can then be passed on to the consumer. Couple this with the cheaper P55 chipset required for the new skt 1156 CPU's and you have the makings for a much cheaper setup than the X58/Core i7 9xx combination. What I still fail to understand is why name the CPU the same as it's skt1366 sister CPU. Sure the 7, 8 and 9 series do distinguish the CPU's a little but I would still have preffered Core i6 or similar. I can see many DSRs being abused due to this renaming strategy which will be a continual headache for e-tailors.
The CPU we had for review today was the range topping Core i7-870 which, like all flagship products carries a high pricetag. While we are yet to receive official prices from Intel, I estimate the i7-870 will be around the $550 mark equating to a guestimate of around £330 when tax, import and UK rip-off prices are taken into account. That's not such a bad price when you consider that the entry level i7-920 upon initial release was close to that mark. The more mainstream 860 and Core i5-750 will be around the $275 and $190 respectively which will be much more affordable and no doubt more popular that the i7-870 we have reviewed today albeit a tad slower in operation in stock format.
It's hard not to admire Intels R&D department as just when you think things cannot get any faster, they go and prove us all wrong. While the i7-8xx range is hardly as groundbreaking as the original Core series, nobody can dispute that Intel have waved their magic wand over the Core series refresh and by trimming the expensive fat from the obese 9xx series they have packaged a product more affordable for the masses.
The Good
- Performance
- Overclocking
- Retention of 8mb L3 Cache
- Turbo Technology
- Price
The Medicre
- Temperatures, while less than 9 series are still quite high
- Memory bandwidth suffers thanks to the lack of a triple channel controller.
The Bad
- Confusing name

MeltedDuron
wow Jimbo thats obscenely fast! It's a shame about the dual channel but I guess they had to cut costs somewhere.. You gonna be playing with some i5's any time soon?Quote

JN
Quote:
The ASUS review launched today is on the i5 platform if ya wanna have a butchers at those benches

Rastalovich
It's all very impressive stuff, looking from the aspect of purchasing a batch of components for a new build.

Personally I'm very unimpressed. Perhaps even to the extent of missing out on the i-series of components altogether.

Perhaps it's the aftermath of purchasing a x9650, and that it's costing is proving itself (even tho I got it cheap), but I look at this review alongside a review some time ago that included x9650 figures, and I draw my conclusions.

More than the crop of components Intel are coming out with, it would be the upgrade of tech for i/o that I think will govern my next thought of buying a new stuff.

For sure, if there is a need or a question posed by some1 "what do I get", I have to say these or AMD's offering - but this would be more for the fact that they're the new kids on the block and cos the sockets have changed.

Personally I'm gonna skip this generation. Bring on the cheap 775 stuff imo. The benefits just aren't there. Put all ur cash into the best GPU and whatever with the rest of ur money.

VonBlade
As I'm sure you'll be reviewing a load of the new architecture in future days/weeks, is there any chance we could have a clockspeed like-for-like? It's fine to see the 920 nearly holding on, but really the pricepoint comparison should be a 950. Or at least bump the 920 to the 870 speed. Then we could really see if the 1156 is worthwhile for those not on the i7 bandwagon already.

Personally, looking at the price and performance I can't see who'd buy 1156 based kit. The 920 is only 30 or so more than the 860, a good P55 motherboard isn't far off a P6TD and the memory is cheaper, but the price per stick is about the same so that's moot.

The only benefit I can see is the 95w TDP instead of 130w. Hmmmm. Hugely disappointing really. If they could have brought it in at AMD price points then maybe. Unless people buy a P55 UD3 and the i5 750. But then you lose hyperthreading which is a boon for those of us who use certain apps. Curses.

I was really hoping this would be the bang-for-buck bargain to beat them all. I'll stick with dreaming of a 920 and a P6TD.

I want to know how much the dual over the triple controller with lose compared to the gains from the increased clock speed.

I'm not sure about this flagship Lynnfield with dual controller costing more than the lower end 920 with tripple channel. Surely with each model up the price and performance should increase. Hmmmm

Nice first touch on the platform though Rich.. Looking forward to more