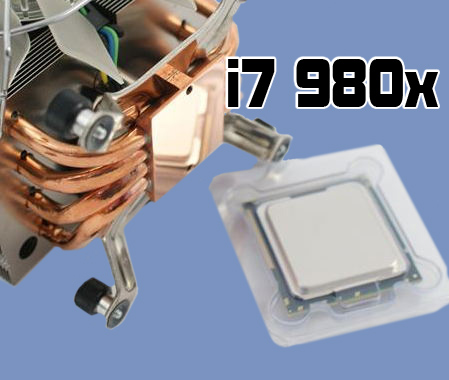 For todays testing we will be using the 980 at stock speeds, the 980 at our stable overclock, and because the 980 is a hexcore and the latest iteration of the premium i7 Intel CPU, we'll also be running against the i7 965 to see not only whether the 2 extra cores and 4mb extra L3 cache make a difference in certain applications and tests, but also if the 32nm shrink has given us performance in those applications that don't utilise all cores.

With a new breed of CPUs, it's time for a new test. Today we're going to be using wPrime. I can't begin to describe it as well as the creator, and so I'll leave it up to him to explain what it does. "wPrime tests your processor performance by calculating square roots with a recursive call of Newton's method for estimating functions, with f(x)=x2-k, where k is the number we're sqrting, until Sgn(f(x)/f'(x)) does not equal that of the previous iteration, starting with an estimation of k/2. It then uses an iterative calling of the estimation method a set amount of times to increase the accuracy of the results. It then confirms that n(k)2=k to ensure the calculation was correct. It repeats this for all numbers from 1 to the requested maximum". I hope you're all nodding at home.

Demonstrating the quality of this benchmark and how well it scales with the amount of cores and clockspeed available we can see the extra 2 cores of the 980 give us around 33% extra performance. This moves up to an incredible 50% when the 980 is overclocked.

Sandra is a great test of a CPUs performance and so we'll be using the CPU Arithmetic tests to see how much horsepower we have here. The pure and simple answer is, plenty. Easily breaking the 100 GFLOPS mark with the overclocked 980 again proving twice as fast as the previously speedy 965.

Everest provides four very good CPU tests that we'll be using today. CPU Queen is the standard chess solving benchmark, PhotoWorxx gives a synthetic reproduction of photo editing and Zlib tests compression. There is also a test for AES Encryption, but we'll discuss that below.

For the Gulftown upgrade from the current i7s Intel have implemented hardware accelerated AES encryption. The benefits of this might not be immediately apparent until you look at the graph below. If you're not impressed you're dead from the neck up.