Here's what you need to know about AMD's B550 chipset

A lot is changing with B550

Here's what you need to know about AMD's B550 chipset

With B550, AMD's bringing some major changes to its AM4 platform, bringing PCIe 4.0 into the mainstream, offering official support for future Ryzen series processors and several other features which have thus far been exclusive to Xx70 series AM4 chipset.

PCIe 4.0 for Everyone, but not Everywhere

B550 is bringing PCIe 4.0 to mainstream users, but that doesn't mean that PCIe 4.0 support is everywhere on B550. While all connections to CPUs are PCIe 4.0 on B550, connections to, or through, AMD's B550 chipset will use PCIe 3.0. This isn't a huge issue, as PCIe 3.0 is still plenty fast for most applications, and PCIe 4.0 remains supported on the main M,2 slots and PCIe connectors on B550 motherboards.

Today, the primary benefit of PCIe 4.0 is the ability to utilise the fastest M.2 SSDs, something which will become important for gamers, given the fact that Sony's PlayStation 5's use of an ultra-fast PCIe 4.0 NVMe SSD. This acts as a great future-proofing option for B550, especially when compared to Intel's B-series chipsets. 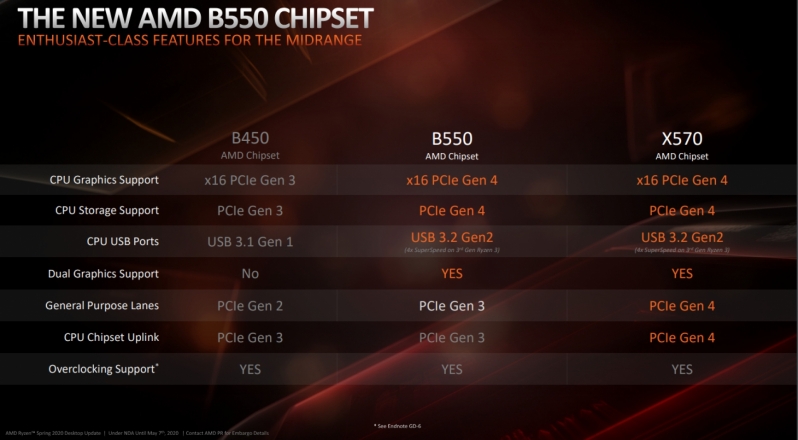 B550 has plenty of connectivity options for users, be it for large numbers of SATA ports, additional PCIe 3.0-based M.2 slots or high-speed USB ports. Like X570, AMD's latest Ryzen processors can connect directly to PCIe X16 slots with PCIe 4.0, and to a single PCIe X4 M.2 slot for ultra-fast storage connectivity.

The image below details the options which AMD offers with B550. Exact motherboard configurations will be defined by motherboard manufacturers. 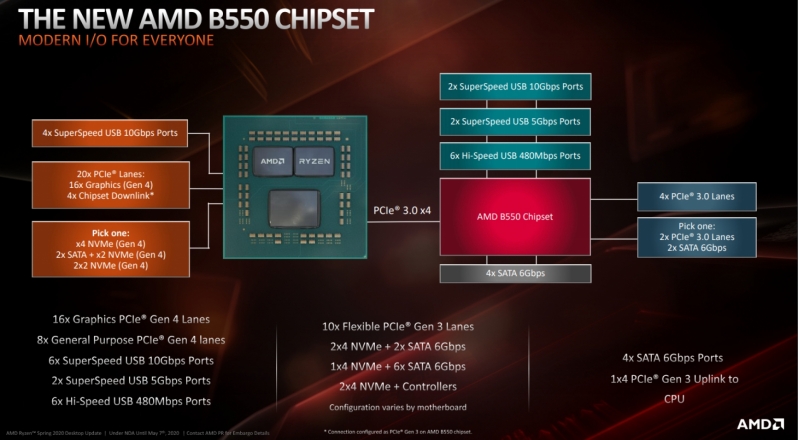 Every major motherboard manufacturer plans to offer B550 designs, offering buyers a variety of options to suit their budgets and system requirements. Over 60 motherboard designs are said to be in development, and retail availability is expected to start in June. 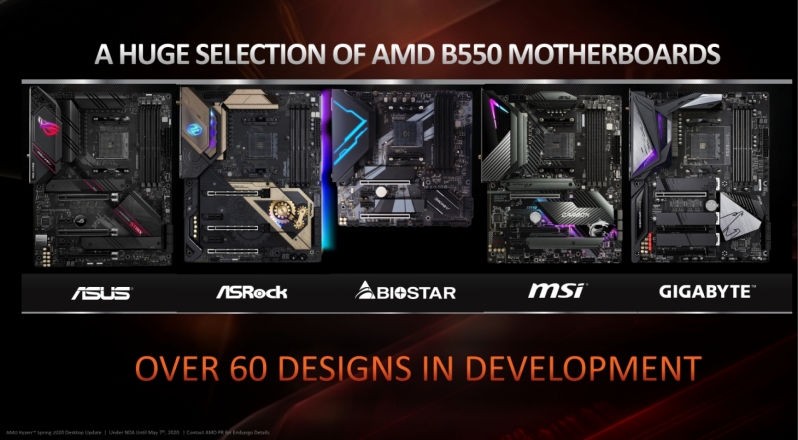 Processor support, Pre-Zen 2 processors are getting cut off

AMD committed to supporting its AM4 socket until 2020, and that has already seen early AM4 motherboards support three generations of Ryzen processors and two generations of Ryzen/Radeon APUs. That's a lot of CPUs, and now that 2020 is here, AMD needs to rethink its approach to socket support.

With B550, AMD will only be supporting Zen 2 and newer processors, which means that only Ryzen 3000 series (excluding the Ryzen 3 3200G and Ryzen 5 3400G) will be supported. B550 will also offer guaranteed support for AMD's upcoming Zen 3 series Ryzen processors, offering buyers the promise of upgradability.

B550 motherboard users won't be able to use older Ryzen 1000 (Zen) and 2000 (Zen +) series processors. Please take this into account when buying B550. While most users will not be buying an old Zen processor for a new motherboard, we know that somebody will fall into this trap, especially if older Ryzen CPUs are on sale or have low used pricing.

The chart below also shows that AMD's older 300-series and 400-series motherboards are not guaranteed to support AMD's future Zen 3 processors. AMD has told us that this is due to BIOS size limitations, as the BIOS chips do not have the storage capacity to support an additional generation of Ryzen processors.

If you want a new motherboard with support for older Ryzen processors, X570 is your best bet, as it currently supports Ryzen 2000 and 3000 series chips. 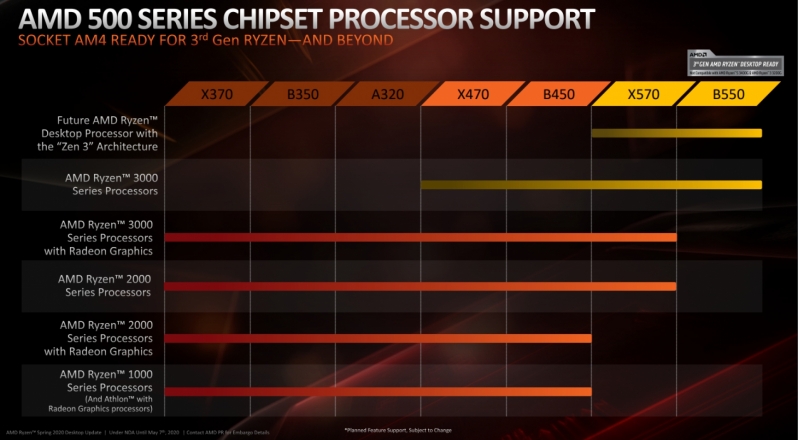 AMD's B550 motherboards are due to release on June 16th, though shipments may be delayed after this date due to the ongoing effects of the COVID-19 pandemic.

You can join the discussion on AMD's B550 motherboards on the OC3D Forums.

AlienALX
Some really nice looking boards in there ! Love the new Strix. Looks like they removed all of that "gamery" crap they added on the 450 which the 350 didn't have.

Good spec too, very solid. Looks like they are definitely taking the fight to Intel over chipsets.Quote

Quote:
Have AMD stated that they are re-igniting support for Crossfire and bringing it to future GPU's?
Can't see many MB manufactures paying out for SLI licencing or consumers paying the additional for it either and Nvidia are slowly killing this off so this seems to me like a pointless addition?Quote

AlienALX
Quote:
I would imagine that side of it is more postured toward the people who like to encode and etc. Or render or what not.Quote

WYP
Quote:
For most people, the main benefit will be extra versatility with PCIe lanes. A single X16 lane will be able to split into to 8x lanes for multi-GPU support or better I/O options.

Basically, B550 is now as versatile as X470, with added PCIe 4.0 support on straight to CPU PCIe lanes.Quote
Reply