The Z97 range of motherboards have so far shown themselves to be evolutionary rather than revolutionary. The biggest change between the Z87 and the current Z97 boards are probably the consistency and price point of them all. There really hasn't been a bad one as such, and even the fully featured ones are coming in a lot cheaper than the high end motherboards of old.

Demonstrating this 'loads of features for little money' ethos is the Gigabyte Z97X SOC Force. It's a member of Gigabyte's rare, but brilliant, overclocking range of motherboards. After the snafu with the design of the most recent G1 motherboard it's nice to see they've retained the iconic orange and black colour scheme. The question is, of course, does it still provide a wealth of overclocking features for those who prefer to tinker rather than just plug and play?

As always with a motherboard the specifications are, to a certain degree, identical to any other. So much of the connectivity is now handled by the Intel Z97 chipset that a big change is difficult to get. It's all about the additional elements that a manufacturer can bolt on, and the SOC Force has plenty of those. 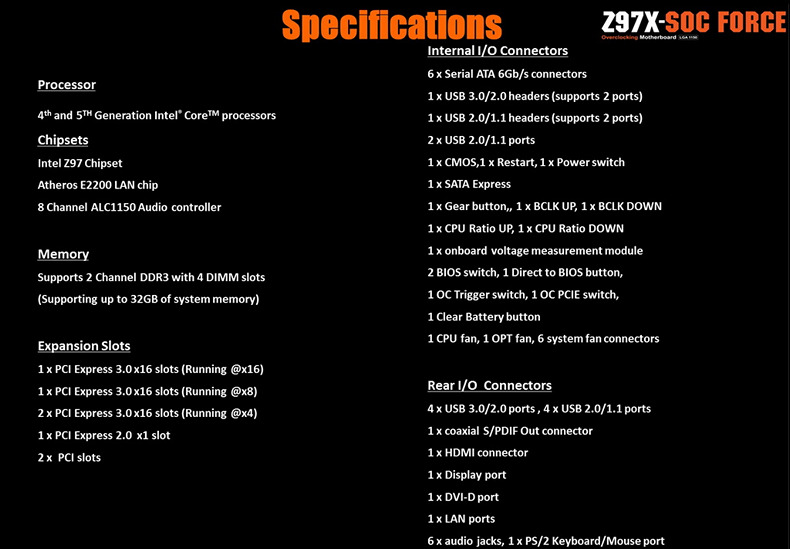 Dicehunter
33 minutes ? Spot on, This calls for the big OC3D coffee mug

*Yes I have a dedicated OC3D mug

Looking forward to watching this

WYP
Wow that thing is an overclocking Beast! It truely lives up to the Super Over Clock name.Quote

mclarenman01
Thanks Tim! I just read the review. Its great to see how this board performs. I cant wait to watch the video when I get home from work

I have the older x58a-oc and don't really need to upgrade but this really makes me want the z97 version to play with haha!Quote

MadShadow
Quote:
All I know is that Tom really likes being called that