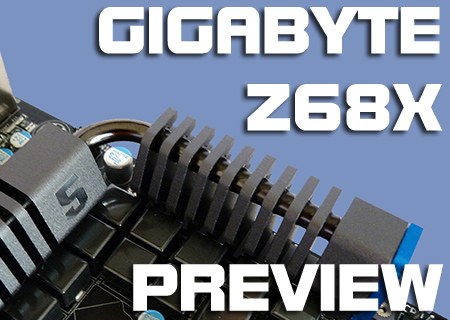 Today we're going to whet your whistle with a little preview of a forthcoming attraction, namely the new Z68 chipset from Intel, here in Gigabyte Z68X UD5 B3 guise.

As we'll be giving you a full review by the end of the week, this is a small taster. The Z68 is the latest chipset from Intel designed for their LGA1155 processor, currently being served admirably by the P67 chipset.

We have a few little changes, the majority of which are on the value end of the spectrum where the Z68 melds the qualities of the P67 and H67. So you have all the integrated graphics benefits of the H67 models, with the performance and high-end feature-set we've come to expect from the P67.

However the real trick is the inclusion of two major technologies. Firstly the amazing Lucid Hydra, that enables you to take advantage of any pairing of GPUs at all, is reborn here as Lucid Virtu. This gives obvious performance options and, more importantly in these energy efficient times, a real power saving. 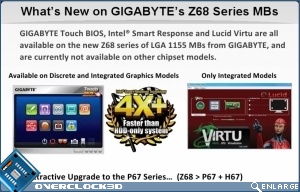 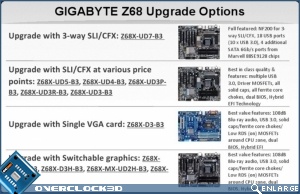 The second major upgrade is Intel Smart Response Technology. If you're one of those people who love to follow all technological improvements then you've certainly heard of the ability to use the speed of a SSD as a cache drive coupled to the large capacity, cheap 'per gigabyte' costings of a normal HDD, to obtain a fast high-capacity storage solution at a far cheaper cost than attempting to get the same size from SSDs or the same speed from HDDs.

Well now this is in-built into the Z68 chipset, enabling everyone to take advantage by adding a small, and therefore cheap, SSD to their existing storage medium. 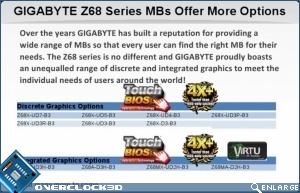 We can't wait to see if the Intel Smart Response Technology does what it says on the tin, and that's something we'll be covering in our full review this week.

But we wouldn't want to leave you hanging without some eye-candy, so let's have a very brief look at our Gigabyte Z68X UD5 on the next page.

sheroo
Tom, you have more motherboards go through your hands than my wife has shoes and handbags - she has lots of those...Quote

where are the video out ports? how would you use the onboard?Quote

tinytomlogan
Quote:
The higher end gigabytes dont have onboard videoQuote

Firat
so is the nda being lifted tommoro? when can we purchase the z68 boards?