We never grow tired of the size of ITX motherboard boxes, or indeed the motherboards themselves. There is something about the combination of having a product which simultaneously can match a massive system in performance terms but yet do so in such a compact format that it also should spark your creativity when it comes to finding a case. After all, if the dimensions are significantly reduced then the non-standard cases that are available to you are almost limitless. 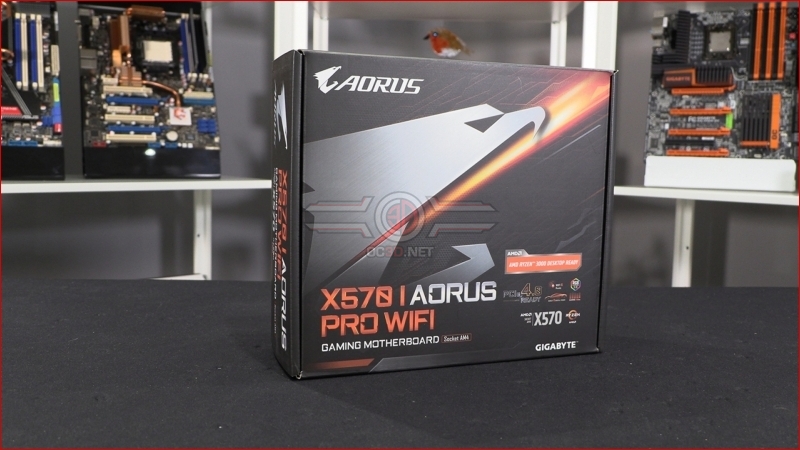 Having spent the recent weeks dealing with some large motherboards with lots of room to arrange the hardware in a manner that lets it do its thing without particular hassle, the compact nature of the Gigabyte X570 I Aorus Pro WiFi is a stark contrast. Despite being so slender in its vertical dimension it isn't lacking for the full set of features one would expect from the X570 chipset. Gigabyte could have taken the easy route and gone with one of the lower specification chipsets, so they deserve kudos for sticking it out with the full fat Zen 2 architecture. 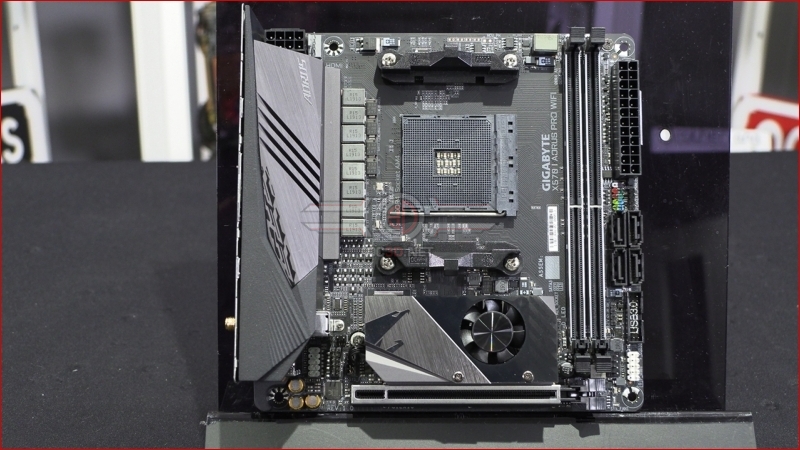 For one of those questions answered we postulated as to whether the 4+8 pin CPU arrangement was standard equipment. Apparently not. The Gigabyte ITX has just the one 8 pin 12V CPU input. Maybe there is a CPU threshold you can't cross or maybe Gigabyte just assume most people will be running a less power hungry model in their new purchase. We aren't going to be giving it an easy ride though, we're going full on with the 3900X, even if we've got the lower-cored Ryzen CPUs on hand. You learn much more testing the extremities. 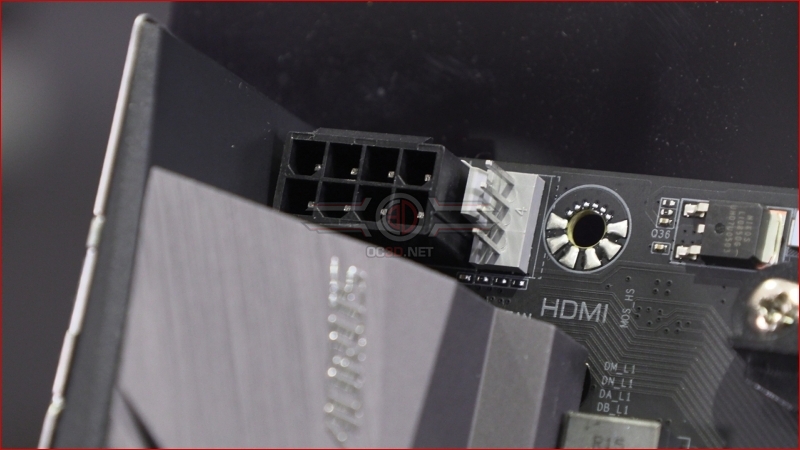 Normally we bemoan the inclusion of vertical SATA ports, but the ITX form factor is such that it is always an understandable compromise. Because each picture covers an awful lot of the acreage of the PCB, and because on the smaller ITX PCB there is much less stuff to talk about in general, it's worth just appreciating the carefulness of the designers in making sure there is a place for everything and everything is in its place. It reminds us of a ship's cabin or airplane bathroom. An absolute exercise in careful planning. We bet the designers were amazing at Tetris. 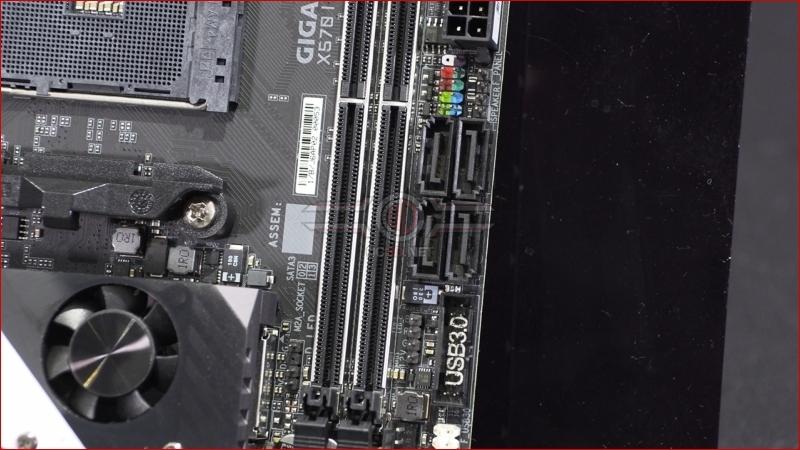 The other fan header of the two available to you on the Gigabyte X570 I Aorus Pro WiFi is snuck into the bottom right just next to the DIMM slot latch. We're also pleased to see that Gigabyte have reinforced the PCI Express 4.0 slot. When it's so near to the edge of the PCB this reinforcement is even more important than it is on the larger form factor. Anything that can stabilise your graphics card whilst also providing longevity to your foundation has to be a good thing. 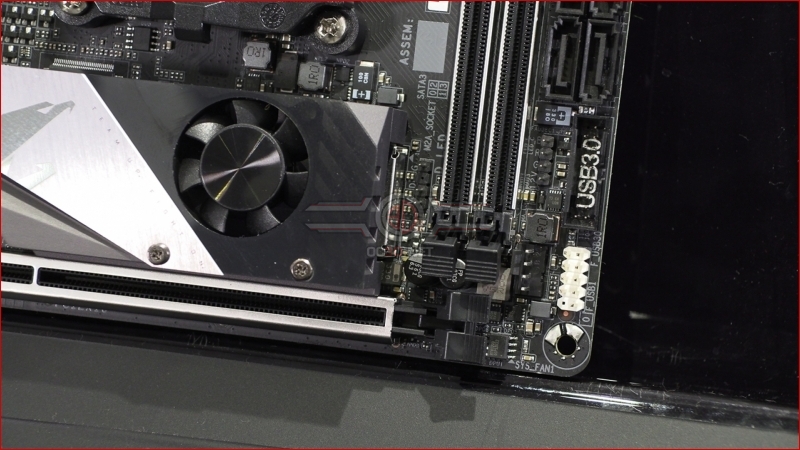 Both of the DIMM slots are reinforced whilst snuck in the gap between the rightmost slot and the USB front panel header is the RGB LED strip header for the RGB Fusion lighting. 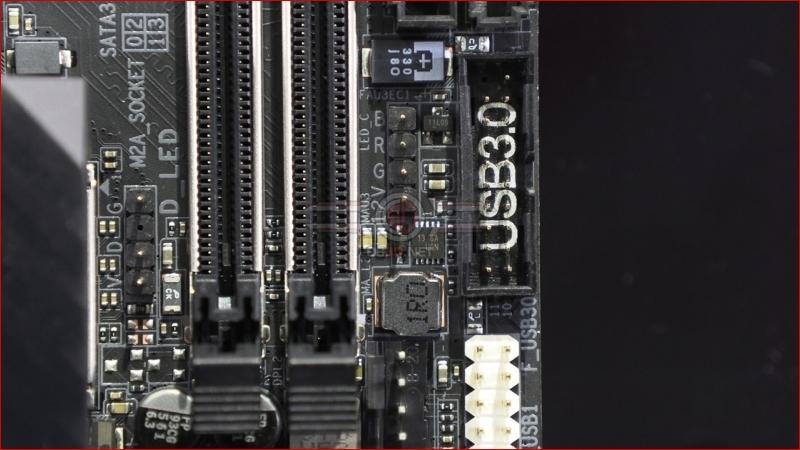 Throughout our time with the X570 motherboards it's been clear that the PCI Express 4.0 needs a fair amount of active cooling to ensure the smoothest, fastest operation even under heavy loading. Naturally with a much smaller footprint upon which to work their design magic Gigabyte have brought a clever solution of combining the M.2 heat spreader with the chipset cooler into one homogenous whole. They've even managed to give it a little design flair by the inclusion of a shiny Aorus head against the brushed background. Engineering people are very smart at solving problems. 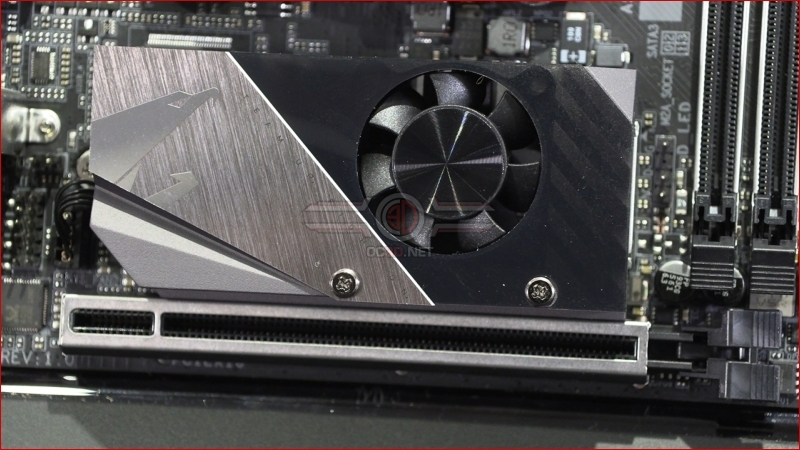 Squeezed into the left hand side of the X570 I Aorus is the front panel audio - long cables a must - as well as a system fan header and the CMOS Clear jumper. We don't know how small your fingers are but we think we'd require tweezers. Of course if you're anything like us you could just stick a screwdriver to bridge the gap. Of course we don't remotely recommend it, just it might prove useful in tight spaces. 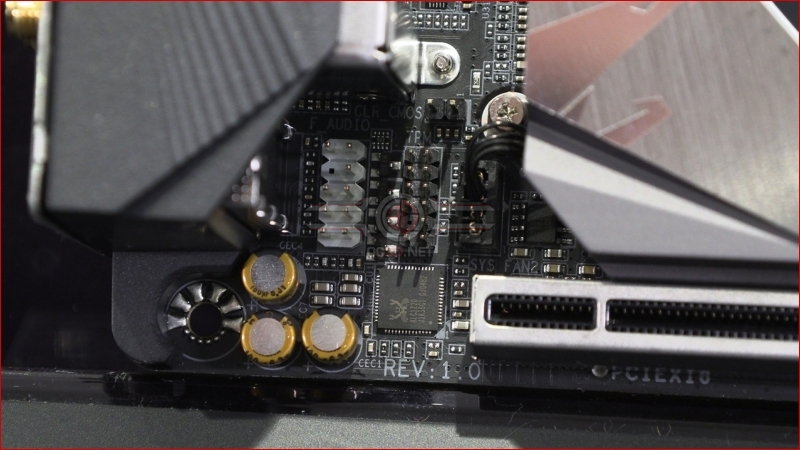