Please note this review was written prior to the AGESA update. Our graphs have been updated to reflect the new results, but the text remains the same as the fast single threaded stock performance affects so few of our results and none of our overall opinion.

We've spoken at some length about how responsive Gigabyte have been to the trials and tribulations of some of their earlier work in terms of accepting there has been something of a fundamental flaw in their design process and, rather than bury their heads in the sand, they have committed to addressing it as swiftly and solidly as possible.

When we reviewed the X570 Aorus Master we saw the first fruits of their endeavours, with a combination of excellent performance and robust power delivery leaving us very pleased indeed. Suitably expectant it's time to take a look at the flagship model in their Aorus X570 range, the Xtreme. We could go on about how time consuming their decision to leave the E off the model name has been for us in terms of making our graphs and proof-reading this review, but instead let us all pretend we're surfers or skateboarders for a little bit and assume Xtreme is the way it should be spelt.

Ahem. By now you'll all be aware of what the Zen 2 architecture brings to the table in terms of PCI Express 4.0 and memory bandwidth improvements along with a whole host of features, but rather than prattle on in the introduction, let's get our favourite iced drink for this sweltering heat and enjoy discovering what the Gigabyte X570 Aorus Xtreme brings to the party.

The undoubted main event of the X570 chipset is the inclusion of the latest PCI Express 4.0 specification which has doubled the available bandwidth from 32 Gb/s on PCI Express 3.0 to 64 Gb/s on version 4.0. That gives you way more bandwidth for your GPU as well as plenty more headroom for your M.2 drive. With current hardware that might mean that both GPU and M.2 perform to their fullest at all times, but the key is that future hardware will be able to take ultimate advantage of this increased bandwidth to bring greater graphical fidelity or truly eye-popping transfer speeds to the party.

The second key component is the addition of Intel's WiFi 6 802.11ax technology which, with the right hardware in your home network, offers twice the throughput of the current 802.11ac specification. Add in support for Bluetooth 5 and there is no doubt that our modern wireless world is catered for in an even stronger manner than it has been until now.

The last feature that we want to put in neon and highlight for you all is the commitment Gigabyte have placed upon bringing the best possible power delivery to their X570 Aorus Xtreme. With an 8 layer PCB covered in double thickness copper and a worlds first 16 phase power - without the use of doublers - the Aorus Xtreme definitely lives up to its name. Given that the top end Ryzen 3 CPU is a 32 thread, 16 core behemoth with 105W TDP the need for plentiful power delivery is paramount. Fortunately the Gigabyte has it in spades. 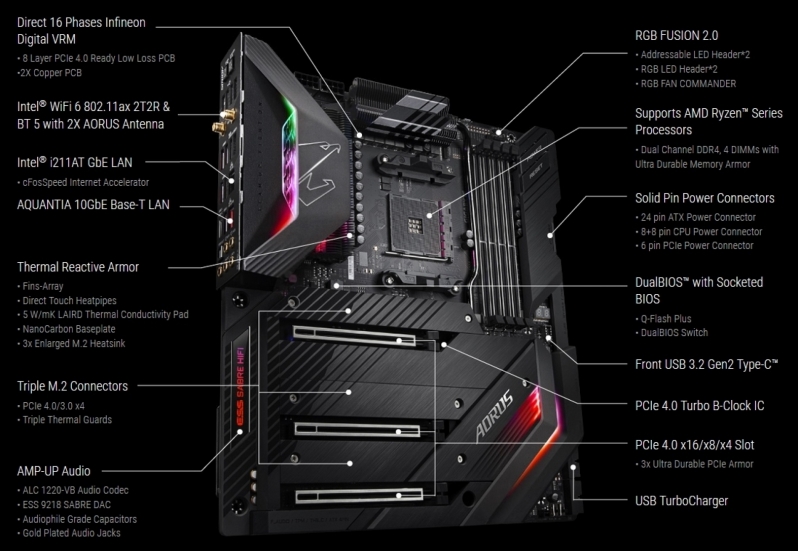 The amount of cooling potential on the Xtreme is in keeping with the quality we've seen from both the Aorus Master and Aorus Pro. As you would expect from a motherboard called the Xtreme, the Gigabyte has plenty of internal temperature monitoring points, two external ones, a cable to help keep your noise under control along with a 8 hybrid fan/pump connectors and a supplied fan commander that brings a further 8 hybrid fan/pump headers to your system if you so require it. It's fair to say that airflow wont be a concern with the Aorus Xtreme. 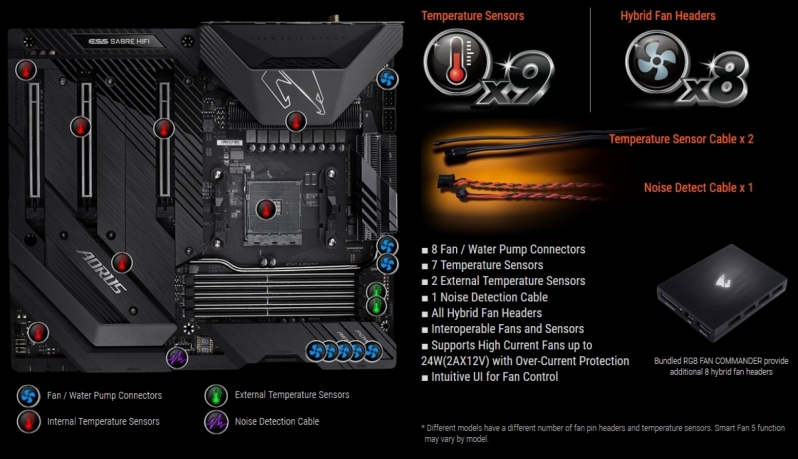