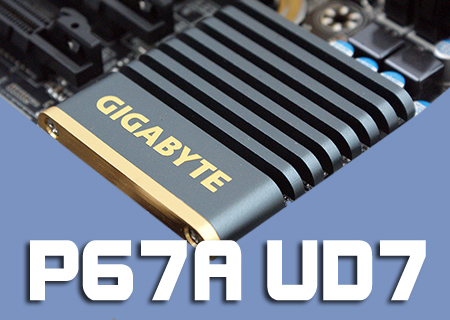 It wont surprise anyone to discover that here at OC3D we're very high on the Gigabyte P67A-UD7.

Let's start with the obvious. It's a stunner. We just don't tire of looking at it and can't imagine that you do either. Although black and gold initially gives us bad nightmares of kitsch 80s things, it's done so tastefully here that we wonder how on earth it ever fell out of fashion. If it's good enough for a Formula One team, it's good enough for us.

It would be, especially in these "all about the bling" times, to have gone wild with the gold and perhaps made all the heatsinks gold against a black circuit board backdrop, but Gigabyte have shown that they have finally cast of the shackles of their history and can really bring a classy looking, tastefully designed, motherboard to the table.

The inclusion of all black slots across the board really deserves highlighting. How often have we, as enthusiasts, brought a board that clearly would only ever be purchased by the geeks in the audience, and found it's almost patronising in its paint-by-numbers slot colourings? Maximum kudos to Gigabyte for treating us like we have half a brain which allows them to really focus on the aesthetic.

However this is by no means a Paris Hilton board though, all looks and absolutely no redeeming qualities. No Sir. This has as much go as it does show.

Overclocking is an absolute breeze. We really can't emphasise this enough. To reach 4.5 or 4.6 GHz is so simple that unless you're either a complete technophobe, or utterly lazy and demand a one-button solution, then anyone can do it. Seriously. If you can change the clock or boot order in your BIOS, you can overclock this board.

Should you wish to go further it's still not difficult, and we managed a perfectly stable 4.9GHz out of our humble Intel i5-2500K CPU. It's not just big numbers either as throughout our testing, Crysis notwithstanding, the UD7 comfortably beat the Intel reference design board.

Pricing is fantastic too. The under-equipped and average performing ASUS Maximus IV Extreme is an eye-watering £300-odd. The Gigabyte UD7 should be available for £250, yet is superior in every respect.

When you add in the many high-end features it comes with, such as a plethora of USB3.0 ports and expansions, eSATA and SATA 6Gbp/s by the bucketload and full 16x/16x PCIe slots it's easy to see why this is a clear winner of the much coveted OC3D Gold Award. The ease of overclocking and performance that unleashes also mean it's worthy of our Performance Award too.

The benchmark has been set. The Gigabyte P67A-UD7 is the mark every motherboard, not just P67 equipped boards, should aim for.

Thanks to Gigabyte for supplying the UD7 for testing. Discuss in our forums.

Stromatolites
Very nice review, the UD7 is one hell of a board to look at.Quote

tinytomlogan
Quote:
Yeah read the review not just look at the pictures! Its 1.4v but cpu isnt reading it correctly.Quote

thestepster
yeah just watched the vid and he says its wrong its set at 1.4vQuote
Reply