Packaging & Appearance
Let me begin by apologising for the poor state of the packaging. The box arrived from another review site who saw fit to plaster stickers over the front of the box in a 'Custom' attempt to derail this review as they know we don't just take a couple of shots of the motherboard and expect that to be enough, we go much deeper than that. Also, the clumsy oafs at that magazine also bent three pins on the motherboard. Luckily for us most enthusiasts know what a shower of buffoons they are so I'll leave it there.
The front of the packaging goes along the same lines of previous EX58 motherboards from Gigabyte with white box embossed with the main title across the front along with the obligatory Intel emblems. Being part of the Ultra Durable 3 range, those who have read reviews from the UD range will already know that 2oz of copper is used in the PCB. Couple this with solid capacitors and RDS(on) MOSFETs and you have a long lasting, efficient motherboard. The Ultra Durable feature is explained in much greater depth when we flip the box over to its rear. 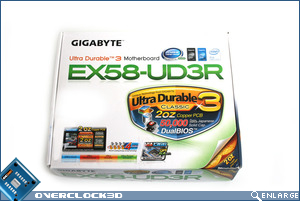 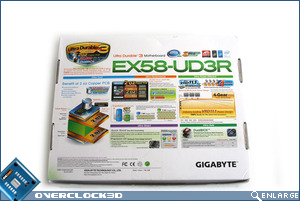 The accessory list is sparse with just 4 SATA cables, an IDE and FLOPPY ribbon cable, back plate and 3 motherboard manuals. Note the lack of SLI connectors. Despite this Gigabyte have confirmed that this motherboard will now support SLI as standard with the latest BIOS update. The motherboard back plate is of typical Gigabyte design, clearly labled and colour coded for ease of use. 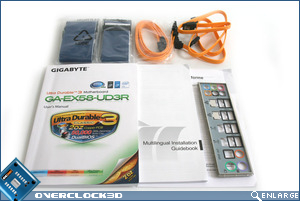 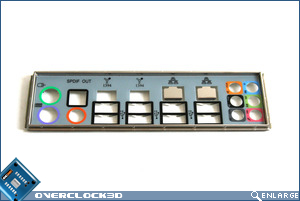 The main board adopts the theme of the EX58 range being a sky blue/white design with matching blue PCB. This is a much improved design over previous Gigabyte motherboards but there is still a nod to the past with the odd coloured port that stand out like a sneezing man on his way back from Mexico. The rear of the board is nothing different from the rest of the Gigabyte range but it's still nice to see the inclusion of a motherboard back plate for the Northbridge. 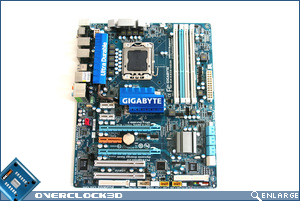 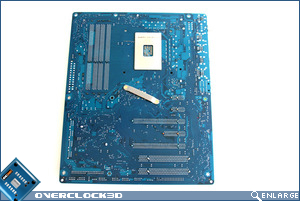 The CPU socket area is a little cluttered with plenty of capacitors and chokes to insulate should extreme cooling be your weapon of choice. Air cooling on the other hand should present no issues, even with the use of over sized tower coolers. Perhaps the most striking part of the motherboard are the memory slots. Rather than support twin triple channel memory, Gigabyte have opted to use just four memory slots supporting a maximum of 16GB (when 4GB modules become available). With 6GB being the sweet spot for everyday computing on X58, there is little need for 6 memory slots. While certain applications will certainly take advantage of 12GB+, this board would be better suited to someone who wants to purchase a fast triple channel kit and given that this board officially supports up to 2.4Ghz of bandwidth, it would be rude not to! 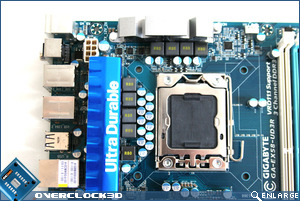 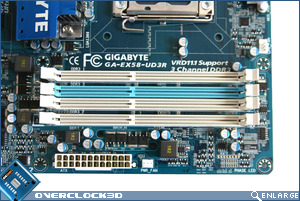 The PCI area has two 16x PCIe 2.0 slots capable of Crossfire (and possibly SLI via BIOS flash), 2x PCIe x1 speed, 1xPCIe x4 speed and two standard PCI ports. Below this is a floppy drive connector which is a rarity on motherboards today. To the left of the PCI area we find a COM port, Firewire port and 2 USB ports. At the edge of the motherboard are the colour coded motherboard headers. Sadly no 'quick connectors are included as with other manufacturers which is a shame as this is a simple but useful feature. Those more astute out there will also be wondering where the on board power, reset and CMOS reset switches are. Sadly, this board is also missing this feature. 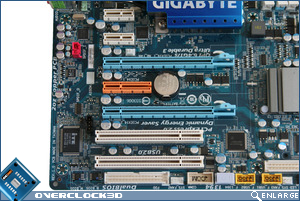 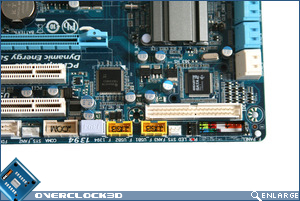 One area which I was impressed with was the I/O back plate. 8 USB ports, 2 Firewire along with PS/2 ports for both keyboard and mouse are there for your connectivity needs. For audio there are S/PDIF in/out ports along with the usual 7.1 3.5mm audio jacks fed by the ALC888 codec. Another feature which is most unusual for a budget board is the inclusion of 8 SATA ports, six on the ICH10R controller capable of RAID 0, 1, 5 and 10 along with a further two on the Gigabyte SATA2 controller capable of 0, 1 and JBOD. 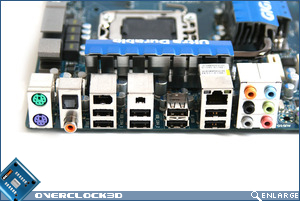 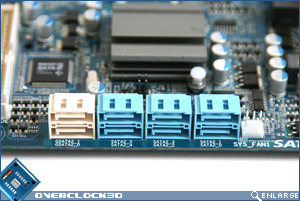 The coolers on the UD3R are all aluminium and the Northbridge (read QPI bus) and left hand MOSFET cooler have covers, the uppermost MOSFET cooler and Southbridge do not. All are coloured in a very fetching gun metal grey with the NB and left MOSFET cooler attached by short a copper heatpipe. 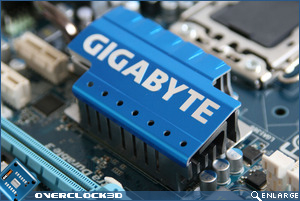 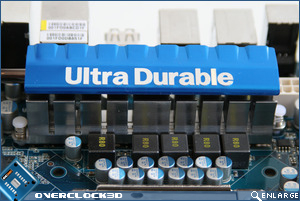 The two heatsinks which are not covered are of a similar design using short thick fins rather than the fragile thin fins we are used to seeing on motherboards. While this is an attractive design I can't help feeling this design is not as effective due to the reduced surface area available to dissipate the heat created by said components. All of the heatsinks apart from the QPI bus are attached to the motherboard via plastic spring loaded pushpins while the QPI bus is held fast via the much better screw method. 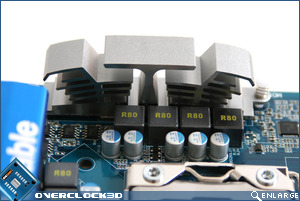 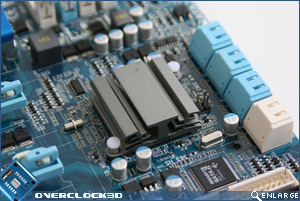 Removing the heatsinks was a cinch and while the NB cooler was a firmly attached using a cement like material, it soon wiggled free. I would however, liked to have seen a better, less permanent paste used rather than the very hard material I found. Despite this, the mount was very good and should not need replacing. 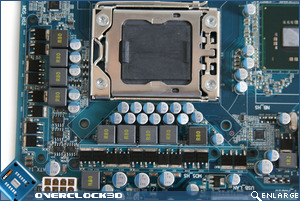 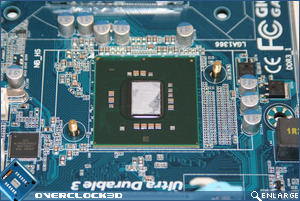 The Southbridge is the standard ICH10R chip used in all of the X58 motherboards we have tested thus far at OC3D and as with most other motherboards, the method of heat transfer was via thermal pads for both the SB and MOSFET coolers, all of which appeared to make good contact with the components. 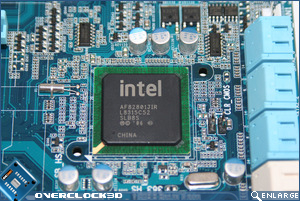 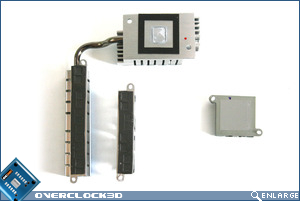 So then, while the EX58-UD3R has some obvious omissions from its stablemates, these omissions might not necessarily be features you need or will miss. It's hard to pass judgement on whether the missing features will be detrimental to the board as the price has inevitably been cut to compensate for this loss.
Hopefully, this will be the last of the features sliced from the EX58 UD3R's armoury but before we take a look at the motherboards performance, let's take a look at the BIOS...
«Prev 1 2 3 4 5 6 7 8 9 10 11 12 Next»

If I were to get the inkling to go I7, this board would probably make the shortlist. Performance at a good price is always a winner.Quote

djw746
Quote:
This isn't that outrageous for the "next" Intel board. We just got used to new 775 being in $100 range... New means long time til mainstream for cheapness... but very sad if you want the best. Stupid Best/New tax

Considering the kind of systems u can still buy with 775 and get an equal terms use out of it. Performance on a par.

w3bbo
Prices of motherboards have been rising for a long time now. You are always going to pay top dollar for cutting edge technology. Take SSD's for example: for a 30GB SSD you could have 2TB of standard drives in raid 0!Quote
Reply