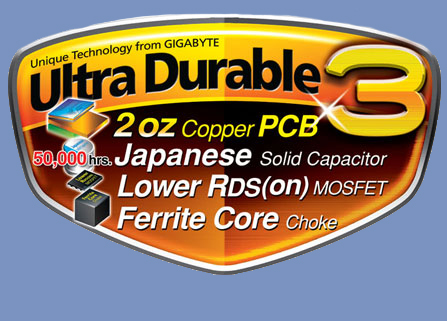 We have reviewed a few Gigabyte motherboards recently with varying results, so we were unsure what to expect of the latest P45-based model to come from the Taiwanese manufacturer. Being a premier motherboard manufacturer we should, however, expect nothing but the best from Gigabyte who pride themselves on reliability and performance. So then, we start this review with vague trepidation but an open mind.
The board itself hails from the new UD series; in this case it's the EP45-UD3 we will be reviewing today. UD, meaning Ultra Durable, might not exactly set the world alight, as the Ultra Durable designation is nothing new to Gigabyte boards, as previously it simply meant solid capacitors were used throughout the motherboard design. This time however, UD actually signifies a leap forward in technology for Gigabyte.
Gigabyte have utilised two ounces of copper for both the Power and Ground layers of the motherboard, delivering a dramatically lower system temperature, improved energy efficiency and enhanced stability for overclocking. Of course, this is coupled with the solid capacitors used as standard on most Gigabyte boards today as well as the Ferrite core chokes, but it's the double weight layers of copper that sets the new standard among motherboard manufacturers. Previously, just one ounce was used per sq foot of PCB (30cm x 30cm), but with the new standard introduced by Gigabyte, this should dramatically reduce temperatures from critical areas such as the CPU, Mosfets and chipset area by spreading the heat throughout the entire PCB. This, Gigabyte claims, can result in up to a 50°C reduction in temperatures over traditional motherboards.

The EP45-UD3 also makes a very bold statement on the DDR2 front, claiming official support of blisteringly quick DDR2 1366+ MHz speeds. Most motherboard manufacturers are hesitant to break the 1200 barrier, but it appears Gigabyte are keen to push the boundaries of ram speed up a notch. This is due in part again to the increase of copper, which improves power efficiency by reducing circuit impedance by 50% and allowing more bandwidth for electron passage. This in turn results in less power being wasted. Less power equals less heat equals more overclocking headroom.
Couple the above with Solid capacitors, Ferrite Core chokes as well as the heatpipe cooling assembly and the EP45-UD3 promises Ultra durability, Ultra cooling capacity, which, for all intents and purposes, should equal Ultra performance.
Let's have a look at the specification in greater detail...
«Prev 1 2 3 4 5 6 7 8 9 10 11 Next»

It's a tricky judgement to make on this mobo, one of the many they have.

They seem to have done a 'good' job of making a ddr2 mobo, from a ddr3 chipset, and it sorta holds it's own with the competition. Doesn't particularly beat anything out-of-the-water, and neither does it drop way-way back on anything. U see it drop on something and in the next stat it's up again. Average it out and it does 'good'.

I struggle to understand why they bother bolting it down from ddr3, and not just stick with the ddr3 mobos. It could be argued they have both types already, in both 3 and 4 series, so I'm stumped further.

It does a great job in the 3d department, so ur gaming isn't going to suffer in anyway. If ur a Gigabyte fan, it won't exactly let u down and u can drag that ddr2 with u.

Not exactly an eyebrows-raiser, but ok it does 'good'. £115 - yeah ok, it's amongst the competition there too.

w3bbo
Thanks for the feedback as always Rasta

. The BIOS is pretty easy to use as with all Gigabyte boards but as with the EXTREME, scrolling through the BIOS is jerky. Not an issue if you only use it once or twice but it can become irratating if your constantly using it.Quote

Rastalovich
Ah thnx for the tip

w3bbo
Not noticed it with the P35's tbh, just the P45's. Like I said it's not a biggie, just something worth mentioning.Quote

Rastalovich
Jeez, felt I had to report back. Installed the EP35 DS4 and frankly it's a great mobo. I have no idea of the benchies or anything, but I've installed it in a mATX style case that takes ATX mobos, with a wifi, 3 drives, and hopefully 4 OSes. It's gonna be my util pc, easy to move about.

Put an Intel Extreme cooler on the cpu, and simply changed 2 things in the bios. Memory to 2x 333 base (from 2.4 auto), and cranked up the fsb to make the cpu 3g. Piece of cake, idles at under 30 - which I was amazed at.

One special bonus was the ALC889A, dts and the drivers seem to work in Vista 64bit !

With a fsb 1600 also, I will be recommending this mobo for it's ease.Quote
Reply