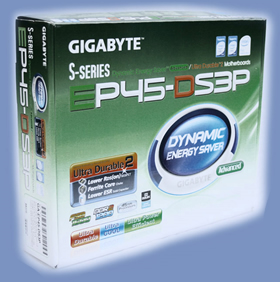 Hailing from the Premiership of PC manufacturers, Gigabyte are synonymous with PC builders worldwide. Renowned for the use of quality components and excellent reliability it comes as no surprise that Gigabyte are usually one of the first manufacturers mentioned when anyone recommends a new motherboard. So when they asked us to review their latest P45 release we jumped at the opportunity.
Based on the P45 Chipset, the EP45-DS3P is an entry level motherboard missing some of the deluxe features that are available on its bigger brothers but be under no illusion that, despite the price and lack of those added extras, that this is a budget motherboard because it's plainly not. All the most commonly used features are still there - Dual LAN ports, Raid 0, 1, 5, 10, on-board 7.1 channel audio, Firewire as well as CrossfireX support, albeit in 8x8 configuration. So as you can see this board has more than enough for even the more demanding consumer. Being a P45 chipset based board, it should be no slouch either as all the other P45 boards we have tested thus far have been very fast and not one has been a disappointment.
I must say at this point that I have never been a big fan of Gigabyte motherboards due to some bad experiences with AMD based chipsets and therefore, perhaps without any valid foundation, have normally given them a wide berth despite the fantastic reputation they have. It has also become fashionable among the elitist geeks to cast a shadow over Gigabyte, again with little foundation - I have been guilty of this myself in the past. As a reviewer though, I have to stay objective and cannot give any prior judgement to a motherboard and I am, as always, happy to be converted should the product warrant it. Fingers crossed, Gigabyte can take pleasure in proving my previous judgemental attitude to be both incorrect and unfounded.
Specification
We have extensively covered the features of Intels P45 chipset in previous reviews so can Gigabyte bring anything new to the table? Lets take a look :

CPUFront Side BusChipsetMemoryAudioLANExpansion SlotsStorage InterfaceSouth Bridge: iTE IT8213 chip: iTE IT8720 chip: IEEE 1394aUSBInternal I/O ConnectorsBack Panel ConnectorsI/O ControllerH/W MonitoringBIOSUnique FeaturesBundle SoftwareOperating SystemForm Factor
• Dynamic Energy Saver Advanced is touted as the worlds only energy saving technology with hardware based 6-Gear switching. It does this by the use of VRD 11.1 allowing the DES to switch to Gear 1 phase when idle then immediately switch to Gear 6  when the need for ultra performance is required in turn allowing dramatic energy savings. So it can save energy, so what? Well thats not all because this is the advanced edition which works two-fold allowing overclockers to feel the benefit of phase power switching, providing stable power delivery to the CPU.
• Low RDS MOSFETs, Ferrite Core chokes and Solid capacitors ensure that this motherboard is not only highly efficient but also built to last. So much for this being a budget board!
• Dual BIOS chips have been around for quite sometime now but it is an essential part of the board and a feature every manufacturer should employ. Gigabyte have had this feature for some time now and it is proof of its popularity that it is still being used today. The time lost due to a corrupt BIOS, be it from overzealous overclocking or a bad BIOS flash can be a deciding factor when deciding on a new motherboard.
• On-board diagnostic LED's. The EP45-DS3R has seven of these leds which indicate a malfunction is occurring whether it be CPU, memory, PCIe16/8/4/1, PCI, SATA or IDE. The DS3P also has another set of four LED's that signify the state of the ACPI (Advanced Configuration and Power Interface) which act as a gentle reminder of how much power your CPU is using. Think of it like a graphic equalizer - red=heavy load, yellow=medium and green=low. Yet another nice addition!
• On-board Power/Reset/CMOS clear switches. Those who have used high end Asus boards will be familiar with these switches and how useful they are.  I was pleasantly surprised to see these employed on a Gigabyte board but thankful nonetheless. Big thumbs up Gigabyte!
Below we see the Dynamic Energy Saver. The DES is very similar to the Asus EPU engine we reviewed previously but the Gigabyte is more advanced in that does not rely on an IC circuit, rather utilizing the Intersil PWM controllers which switch on and off power phases 'on-the-fly' as and when required. For example the EP45 is a six phase engine and while that six phase power will be needed for 100% CPU load or, for example, playing a game, the Dynamic Energy Saver will throttle back the power to say two phases when you drop out of the game to check-up on how you eBay bid is doing as browsing the net requires so little power. 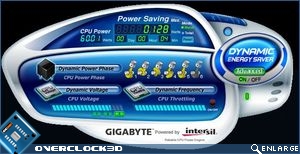 While this may seem a little like a marketing gimmick, it does actually work and while monetary savings will depend on your electricity supplier, savings are to be had nonetheless. While the money saved, in all honesty, won't be a great deal, the tree-huggers out there can rest easy that at least Gigabyte are doing their bit to save the environment.
«Prev 1 2 3 4 5 6 7 8 9 10 Next»

Ham
Slightly raindowish. But pretty nice for the price tbh.Quote

FarFarAway
See now that's an enthusiast mmotherboard. Cheap and clocks nice with decent performance. Like it

Fake
What BIOS was it flashed too? I have the same motherboard and with an E8500 at 4085MHz but I'm have some troubles. I keep getting BSOD and I looked up the BBCode and they are all memory related. I did some research and apparently the motherboard is picky with the RAM it is used with.