We've always liked the cut down chipsets and they bring a lot of the performance of their bigger siblings to the party, but for a greatly reduced entry fee. In fact the only area you're usually losing out on is the amount of high bandwidth devices you can install. Let's be honest though, most of us have one quick M.2 drive, one GPU and after that the regular set of connectivity will suffice. If you want a motherboard into which you can install three PCI Express 4.0 drives to run your Threadripper 3990X then you probably have enough money that you won't be staring down the barrel of the B550 chipset. But if, like the rest of us, your PC budget is always constrained by the need to have food and shoes, then you might want a more affordable PCB around which to base your system.

In the Gigabyte range the Aorus Master is comfortably the most expensive, with a MSRP of £300, compared to the £195 of the Pro or £185 of the ITX Pro, so you need to make sure that you desire all it can give you. Speaking of which, let's run over the specifications and imagery before we install our Ryzen 9 3900X and find out whether it is worth its salt.

The B550 might be a theoretically cut down version of the X570 chipset, but looking at the features on this Aorus Master we're struggling to find an area in which it's lacking. We have high bandwidth from USB 3.2 Gen2 ports. It still has PCI Express 4.0 on board. Whilst PCI Express 4.0 doesn't make a lot of difference to your GPU, even an RTX 2080 Ti, it has a profound effect upon the transfer rates of a suitable M.2 drive, and fast transfer rates make your whole system feel much more responsive. Like a water boatman instead of a slug. Networking finds both the Intel WiFi 6 802.11AX that dominated the X570 releases, with 2.5G LAN for your home networking needs, or just the needs of those of you with jealousy-inducing internet connections.

That's the basics out of the way. We know you're keen to see it in the flesh so let's see how many fan headers you get and then we'll move on. 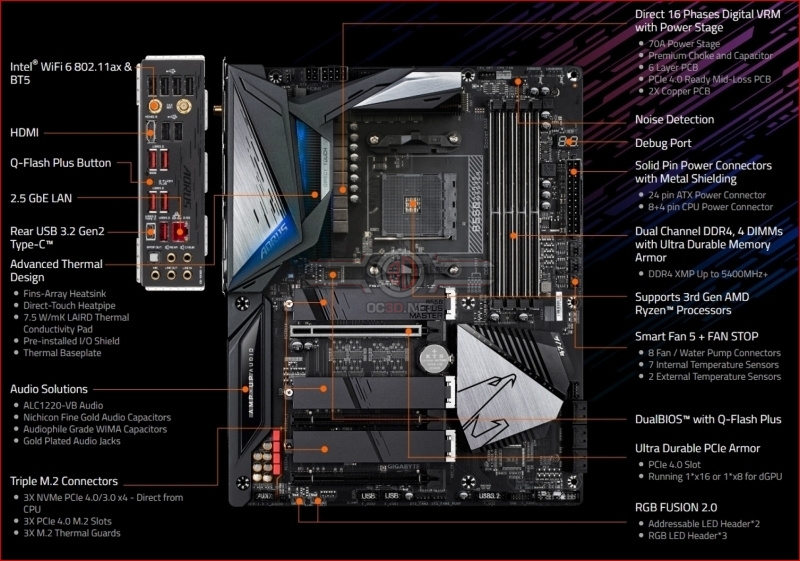 Keeping your system cool is vital to getting smooth and consistent performance, especially as we move into the summer months. Well, OC3D is British so the summer month. But we're sure those of you in California or Australia will appreciate the amount of fan headers available on the Aorus Master. 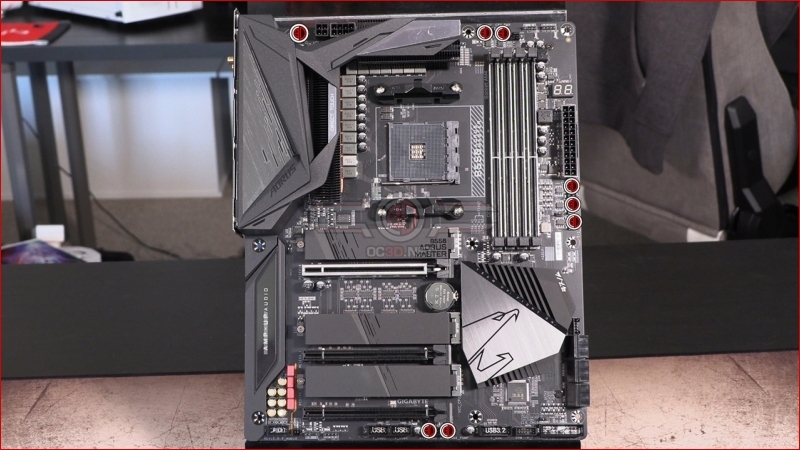 Avet
I don't know why Tom is so against 3 NVME Gen 4 full speed drives. I think it is a masterstroke.

(pun intended) If it was Gen 3 lanes I would understand. Probably not even 3080Ti/3090 will be able to saturate X8 Gen 4. SLI is dead so why not use those PCI-E lanes for uber-fast storage? Two chipset PCI-E slots will be more than enough for any expansion like 10G or capture card.

If you use 2 GPUs for rendering well then go for another board, but for most people, this is a much better distribution of lanes.Quote

The_Crapman
Another motherboard release with eye watering prices. B550 is meant to be the knock down cheaper alternative, but they're still pushing out £300 boards!? Mental. B550 lowers the scale of pricing from x570 sure, but am I the only one who thinks we're getting screwed by motherboard manufacturers?Quote

AlienALX
Quote:
Apparently the traces need to be super clean. Meaning the cost goes up. That is at least what I have heard.

Don't forget that a part of that price is the chipset price also. Like, from AMD. IDK if they charge a license fee like Intel...

Sadly this will just continue, until Intel give them a reason to have to drop.