Upon first impressions, the Foxconn Renaissance demands your attention. The black and orange theme has been continued on from the packaging that we saw on the previous page and gives the motherboard a sleek and professional appearance. This is a major departure from the A79A-S and ELA P45's mismatch of colours. Personally I don't think a black PCB can be beaten for 'coolness'.  One glance at the Renaissance, and you would be drawn to its peculiar-looking northbridge cooler that looks like a speaker, but it is purely cosmetic, as with the southbridge cooler that looks like a rotary knob from a hi-fi system, from an angle. These are just to make the motherboard aesthetically blend with the Digital Life branding. 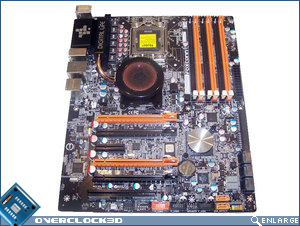 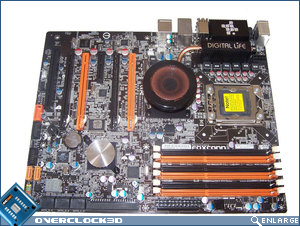 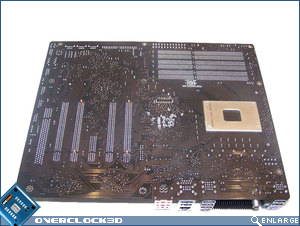 Beginning our tour around the motherboard at the expansion card slots, we can see that Foxconn has included two PCIe x16 (orange), two PCIe x8 (black);one PCI x1, and one PCIe slot respectively. The Foxconn Renaissance supports CrossFireX ( 2x16 or 4 x 8) and 3-way SLI. To the left of the expansion slots is a RealTek ALC888SDD, which provides both DTS Connect and Dolby Digital Live and drives the 6 audio jacks and the optical/coaxial audio connectors.

Continuing on along the bottom edge of the motherboard we have: 1x IEEE 1394 connector; 2x front USB; speaker connector;  2x Serial Attached SCSI connectors; front panel and Power/Reset buttons.IEEE 1394 support is provided by a Texas Instruments TSB43AB22A chip which is visible to the left of the second orange PCIe x16 expansion slot. The SCSI connectors are controlled by a Marvel 88SE6320-TFJ2 chip and it can be found immediately above, and to the left, of the orange SCSI connectors. 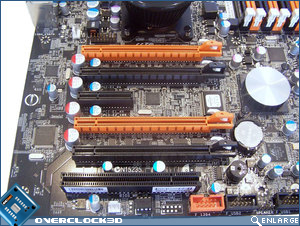 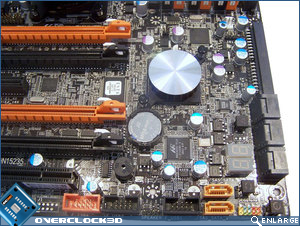 In the bottom right hand corner of the motherboard we have the digital de-bug LED's; 6x right angled SATA ports and the IDE port. The SATA ports are controlled via the ICH10 chipset and a JMicron JMB363 Host Controller which can be seen behind the IDE plug. Also present here are an onboard speaker; AMIBIOS flash ROM; Fox One chip (monitors critical motherboard components) and CLR_CMOS button.

Moving up the right hand side of the motherboard we have the 24-pin ATX Power connector and six DDR3 DIMM slots. The DIMM slots are are able to accommodate 24GB of DDR3 system memory. Moving around to the CPU socket area we can see it remains relatively uncluttered with the exception of a number of low-profile solid capacitors and chokes to the left hand side of the socket. We can see the ATX 12V power connector sitting at the end of the Digital Life PWM heatsink 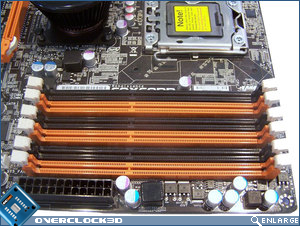 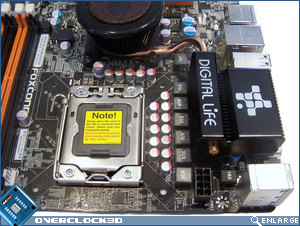 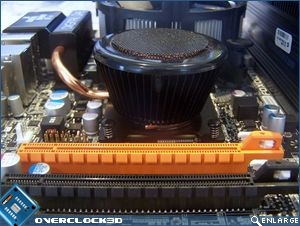 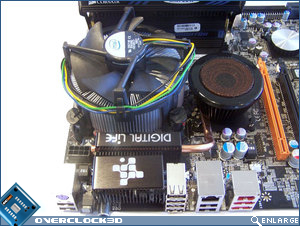 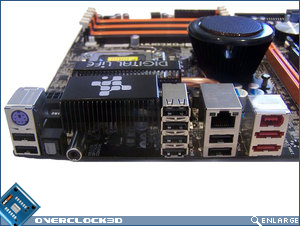 The rear I/O panel features a plethora of connectivity options. A legacy PS/2 mouse port is there along with eight USB 2.0 ports. The two eSATA ports and the FireWire port provide plenty of high-speed access while the coaxial, optical and 6 audio jacks (courtesy of the daughter card) enable many different audio outputs. The somewhat surprising single gigabit Ethernet port is powered by a Jmicron363 controller.
«Prev 1 2 3 4 5 6 7 8 9 10 11 Next»