Test Setup
Those of you who are regular readers of OC3D will recall us testing an AMD X4 620 last month, and finding it to be an eager overclocker than quickly hit a wall. As todays Biostar TA785GE is based upon the same 785G chipset that the Athlon X4 was tested with, we couldn't resist giving it another spanking to see if it is a chip limitation or a motherboard one.
CPU  : AMD Athlon II X4 620 @ Stock
Motherboard : Biostar TA785GE 128M
RAM : 4GB OCZ Reaper
GPU : Integrated HD4200 for media playback. HD4850 for game tests.
HDD : Samsung Spinpoint F1 1TB
Cooler : TRUE 120 Rev A
One thing of note if you are fancying testing the overclocking capabilities of the Biostar TA785GE is that the backplate supplied with the board wouldn't support our, admittedly early revision, TRUE 120. There is just nowhere to screw the retaining screws into. Thankfully another was quickly sourced to enable our overclock tests to be run. It's a minor issue on a board such as this but something to be aware of.
Overclocking
In our previous review this processor managed a very respectable, but frustrating, 250 BCLK for a final speed of 3.25GHz. With the Biostar using DDR2 instead of the DDR3 in the previous test, but with a different BIOS and more options within that for overclocking, hopes were high that we'd at least crack the 250 BCLK barrier if nothing else.
However before we got into the BIOS for some manual tweaking, Biostar provide a handy overclocking utility with their motherboards, as mentioned previously. With some trepidation it was fired up and, after a quick test to check it was applying settings correctly, the ever-dangerous "auto" button was clicked and the software left to find a stable mark.
The first thing of note was that the TSeries Overclock III is the perfect student at overclocking. Going only 2 up at a time, and then testing fairly thoroughly. The overclock utility does warn that it will reboot if it hits something it doesn't like, and sure enough at 248 the PC rebooted. I was quite disappointed, but a another run and the program upped the voltage a little and hit what it considered a stable 254BCLK. Sure enough after running the usual battery of tests it was very stable indeed. 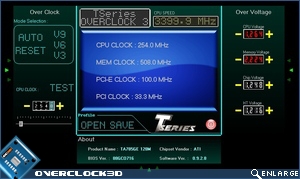 With hopes high that the BCLK barrier from the first test has been broken, and  on much lower voltages, it was time to take it into the BIOS. This lead to some curious experiences. It could be pushed quite a lot further, but without much stability. Even mental voltages didn't add stability to the chip, leading me to believe that this motherboard can definitely get more out of this processor than the previous test system, but that there are still a lot of stability issues with either the chipset or the processor past 250BCLK.
However, the Biostar was happier with getting the CPU to boot even though it wasn't hugely stable. Which can help those of us who like a suicide shot. The final balance between a suicide style shot, and stable enough to run something, was the one below. A big improvement on the best BCLK seen so far, with only average voltage tweaks to try and keep it within safety margins. It was stable enough.. just to run this and a couple of light tests, but it very quickly fell over. I think we're reaching the limit of the chip, but a 1GHz overclock is impressive by anyones standards. 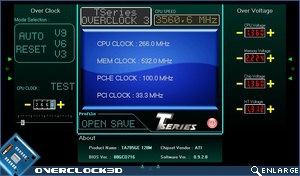 Well done to Biostar for not only providing a custom software overclocker than didn't just fry the processor in one go but actually provided a stable, low voltage overclock. Even more impressive was how it wasn't far behind the ability of a manual tweak. Only a proper balls-to the-wall started to demonstrate the use that a little specialist knowledge can bring, it's great result for Biostar in both motherboard abilities and software overclocking.
The CPU was then returned to its stock settings before the benchmarks were run.
«Prev 1 2 3 4 5 6 7 8 9 10 Next»