It's almost impossible to begin looking at the ASUS Maximus VIII Formula without considering our recent review of the Hero Alpha. The big star of the show with the Hero Alpha was ASUS' latest technical innovation, the AURA RGB control, which allows you to adjust the lighting in your system using a handy little software tool. We absolutely loved the feature and, indeed, hoped to see it adopted in a more fulsome manner across the range.

We certainly didn't expect the very next motherboard that landed in our office, the Maximus VIII Formula, to take this concept far further than we could have imagined. No sooner had we tried the tasting menu than a big steak was placed in front of us.

However, we're getting somewhat ahead of ourselves.

The Maximus range used to consist largely of the Formula, the motherboard for the every man, and the Extreme, the motherboard for those who demanded only the very best. This range was rapidly expanded into the Ranger, the Hero and a raft of minor adjustments until it appeared that the Formula and Extreme models had been consigned to the history books. No such fears come true though, as here we are with the Z170 Maximus VIII Formula, a motherboard with all the bells and whistles necessary to satisfy even the most demanding tech-head.

No matter what your favourite area of the rapidly improving technology market is, the Formula has you covered. By virtue of the Intel Z170 Express chipset it supports the outstanding Skylake range of Intel 6th generation processors. Almost guaranteeing that the heart of your system will be powerful. Additionally the thumping great bandwidth provided by DDR4 - supporting a massive 3733MHz - maximises your productivity. This is aided by support for every storage type you could wish for, including the jaw-dropping NVMe U.2 drives, damn speedy M.2 drives, and 10Gb/s SATA Express, alongside the more standard 6Gb/s SATA, which is hardly slow.

If you're more about gaming than connectivity the Formula has two PCI Express 3.0 x16 slots working at either 1x16 or 2x8 for SLI/Crossfire gamers. Beyond that there is a single x4 PCI Express 3.0 slot and 3 of the tiny x1 slots which are mainly used for dedicated audio cards. However, as the Formula equipped with the ROG SupremeFX 2015 audio and it's excellent quality Headphone Amp and ES9023P Digital-Analogue Convertor the likelihood of you finding the sound quality wanting is slim at best.

To move beyond raw specifications to the other parts which are even more impressive than the above, we need to look at the Maximus VIII Formula in depth. Onwards. 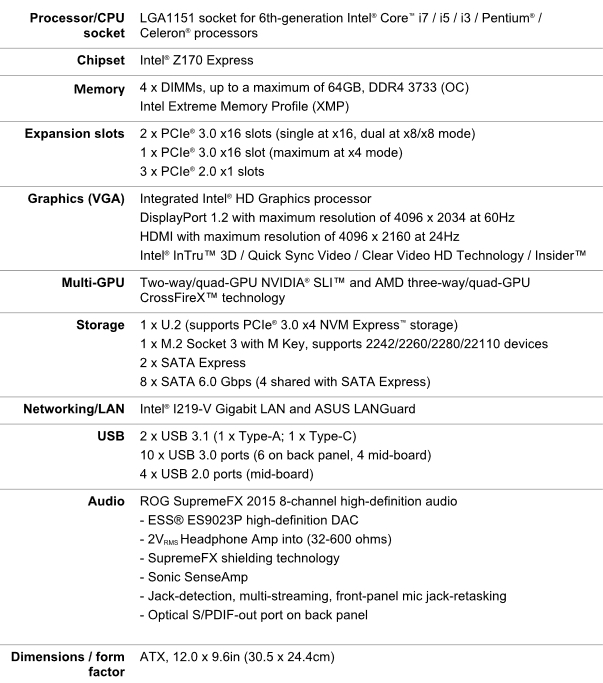