Up Close - The Rampage V Extreme

After seeing the crisp white X99 Deluxe it's almost, and we do mean barely almost, a bit dull to return to the black and red of the Rampage V Extreme. It's fantastic for ASUS that the Republic of Gamers brand identity is so strong that you could draw what it looked like without seeing it. However, as is so often the case, the colour scheme isn't all there is to talk about.

The CPU socket area is certainly busy. The 8 DIMM slots take up plenty of room and when there is such a large heatsink placed above the IO area it definitely gets crowded. Yet, at the same time, there is a logical layout that lets you know that ASUS haven't got a single capacitor out of place. You can also see the unique socket that keeps the four holes free, so if you want to bolt your sub-zero pot to it you can do so without dismantling things first. 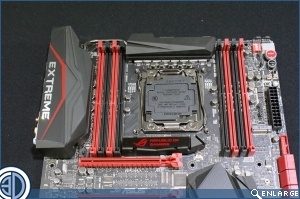 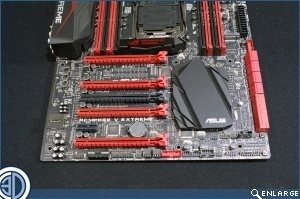 It wasn't that long ago that 4 SATA 6Gb/s ports were considered an extravagance and yet here, even if you take up the SATA Express slots, you still have a massive eight left over for your storage devices. As SSDs become ever cheaper more people are choosing to have a collection of decent sized SSDs rather than one giant HDD, so it's nice to have lots of places available. We'll take a look at the buttons in more detail in a moment, but just for now look at how far in the ATX 24 pin power port is. The part of the motherboard that takes the most stress due to the thickness of the cable, and it's not on the edge to reduce the risk of getting a break in the solder. It's the little details like this that demonstrate the quality of the Rampage V Extreme. 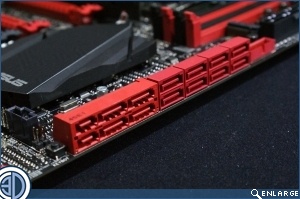 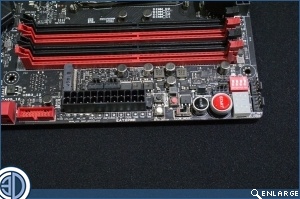 Speaking of details, the PCIx1 slot is down the lower end of the ladder of PCI Express slots so you can run two cards without compromising your ability to run a PCIe x1 card in the correct slot. The Rampage V Extreme supports up to four cards - Quadfire/SLI - so if you have a 40 PCI Express lane CPU such as the i7-5960X, you really can go hell for leather at those world records.

Considering that the X99 included a shield/heatsink all the way down the left hand side over the onboard sound components it's somewhat surprising the Rampage V Extreme hasn't gone down this route. It looks great and you want the best possible aesthetics, especially for the flagship board.

At the very least you wont be short of fan headers. They've been crammed onto every available inch of spare PCB. 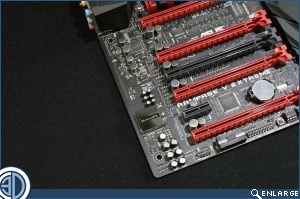 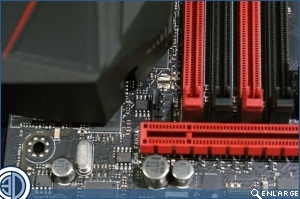 The heatsink for the power phases, like the many ATX power inputs, shouts about the target audience for the Rampage V Extreme. This is designed for the most power-hungry, performance desiring users.

When it comes to inputs and outputs there is plenty available on the R5E. From left to right are the reset and ROG link buttons, combined PS2 along with two USB 2.0 ports, 10 (count them) USB 3.0 ports, the Intel GigaLAN RJ45 jack, Wireless antenna spots and outputs for the ASUS SupremeFX 2014. 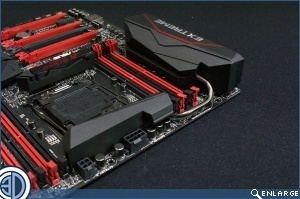 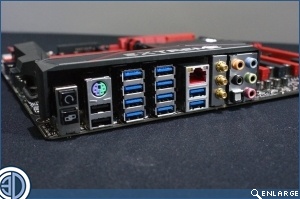 Finally all the important tools for hardcore overclockers are placed in one area. It's good to have the Error 7Segment display right next to the ReTry and Safe Boot options. The Safe Boot, as we said before, is an absolute godsend, enabling you to squeeze the maximum out of your setup without fearing you'll tip over the edge and lose everything. With one button press you're back up with the last settings. It frees you up considerably, or at least removes a lot of the stress when on the ragged edge. 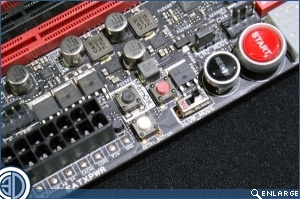 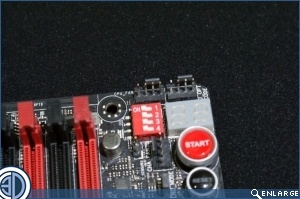