We're not sure if it's a deliberate ploy by ASUS to only use the Rampage brand for the very top of the line Intel products, or whether Intel have been refreshing their 'second in line' products way too often, or perhaps even a combination of the two, but three years ago the Rampage IV and Maximus IV were released. The Maximus is now up to the Maximus VII, and we've only just got our hands on the Rampage V.

But having seen how incredible the performance of the new Haswell E Intel Core i7-5960X is, it seems fitting that we have a new flagship ASUS Republic of Gamers motherboard to go alongside it. Bringing all the latest revisions and tools to the party, this is going to be a long one.

So you, dear reader, know exactly what to expect, and we have much to do, so let us dispense with the preamble and get down to the nitty gritty of the ASUS X99 ROG Rampage V Extreme.

If you've read our Intel Core i7-5960X review you'll know many of the new elements to the X99 chipset, but for any newcomers we'll go over them again.

It starts with the LGA2011v3 socket, although quite what happened to the v2 will remain a mystery. On the ASUS motherboards this is actually a LGA2011v3 OC socket, as ASUS have a few, patented, tricks up their sleeve we'll get to shortly. After that there is finally support for DDR4 memory, which we saw on the Intel review doubled the bandwidth of the standard Z97 Haswell motherboards.

ASUS themselves have gone all out too, with 12 SATA 6Gb/s ports - or eight if you wish to utilise SATA Express - an M2 socket, 14 USB 3.0 ports for all of your current peripherals and smart devices, 5GHz WiFi, Bluetooth 4.0, the excellent Intel I218-V LAN and their own SupremeFX 2014. It's a monster set of features that truly indicates where the Rampage V Extreme is in the ASUS pecking order. We'll give you a clue, it's right at the top.

Should you doubt how much time has passed between the release of the still excellent Rampage IV Extreme, and today's Rampage V Extreme, then this handy table on the right gives the clearest demonstration. The Rampage V makes the IV look like a pauper. 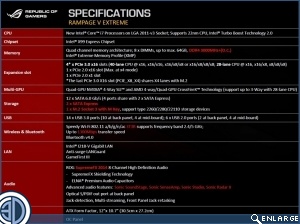 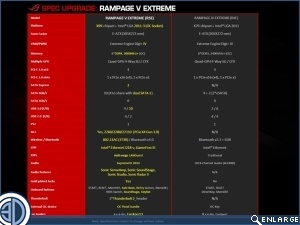