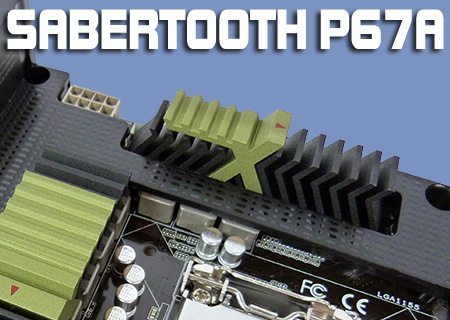 As we said at the start, the X58 Sabertooth is, in our opinion, the best X58 board around. Amazing feature-set and blistering performance at a fraction of the price of high-end offerings.

The P67A B3 Revision Sabertooth is just as impressive.

It has all the accoutrements you'd hope to see from a modern motherboard. A lack of the obsolete Floppy and IDE sockets, plenty of fan headers and USB3.0 ports, along with SATA3 and the link. It truly is bristling with all the features that 95% of us require.

Performance is right up there with the very best. We got 5 GHz out of our Core i5-2500K without too much effort and although we needed to drop the voltage for reliabilities sake it was bombproof at 4.8 GHz and quite happily ran everything we threw at it without breaking a sweat.

The looks are something we particularly like. We fell in love with the subtle hues of the original Sabertooth and they are replicated here, but with the addition of the Thermal Armor which covers most of the untidy looks of a standard motherboard. Once all the hardware is installed it really looks an integral part of your system and the room for customisation is obviously something we like very much indeed.

It's worth mentioning that despite some slight concerns about how well the Thermal Armor would channel airflow, and the airflow itself after it's come across the CPU heatsink, at no point did the temperatures stray from anything other than the norm. So although the motherboard temperatures did NOT drop as you would be lead to believe by Asus, they certainly did not increase through insulation as we had suspected when we first saw the design. Looks and performance in one package. In fact our only tiny blemish is the need to either have a downward facing cooler to aid the motherboard cooling, which takes away some of the best CPU cooler options, or to mount a tiny fan which wont be kind to your ears.

To be honest if this was priced at £250 we'd still consider it a worthy purchase, so to find it available for £150 makes every other motherboard look either overpriced or under-featured. Unless you have a specific need for more than two graphics cards, or whatever tiny differences a higher-priced board is furnished with, then your list of potential purchases should only contain one board, the ASUS P67A B3 Sabertooth.

Awesome looks and equally stunning performance at a price so low we'd expect it to be shouted at us in a late night advert; "Come to Crazy ASUS where we're practically giving away epic performance at a tiny price".

One of the easiest OC3D Gold Award winners there is, an absolute must purchase, and at this price we have to give it our OC3D Value Award too.

Thanks to ASUS for providing the Sabertooth for review. Discuss in our forums.

SieB
Hmmmm.... I need to RMA my B2 P8P67 soon (when I can be bothered) don't know whether to upgrade to the Sabretooth or not but this review certainly has got me thinking about it.

Pat123
Arrggghh I had decided on the UD4 and now you rave about this. My head can't take it. I think i'll go for this simply because it's ALL black.

zeppas
Awesome, love the sabertooth. Speaking of downward facing coolers, when will we see a head to head, a mano a mano,