Here is the Z390 in all its glory. The buzzword-heavy quote from the previous page is revealed in the reality of a PCB that is much darker than the Z370 Strix, and even the grey heatsinks are darker. This should mean that when your system is off it almost disappears into the shadows, but with the benefits of RGB lighting it should really pop. As a mild spoiler we think the RGB lighting on the Z390 Strix-E is possibly the best ASUS have brought to market. 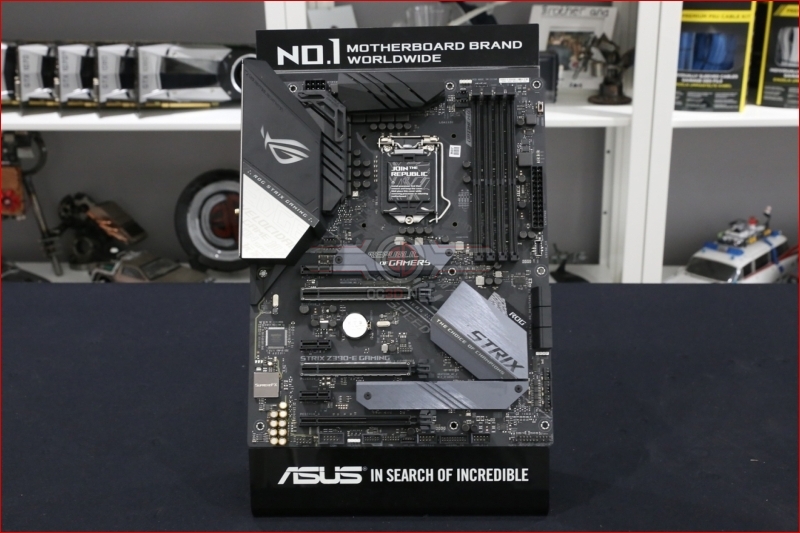 Take a moment to drink in the design of the Strix-E. The fan and pump headers are well positioned, two fans at the top right of the CPU area and a pair of AIO headers at the bottom left. The heatsinks are the perfect combination of form and function, even the black capacitors help give a 'none more black' aesthetic to the PCB. The M.2 drive beneath the CPU socket is supplied with a heat spreader, just like the one at the bottom half. 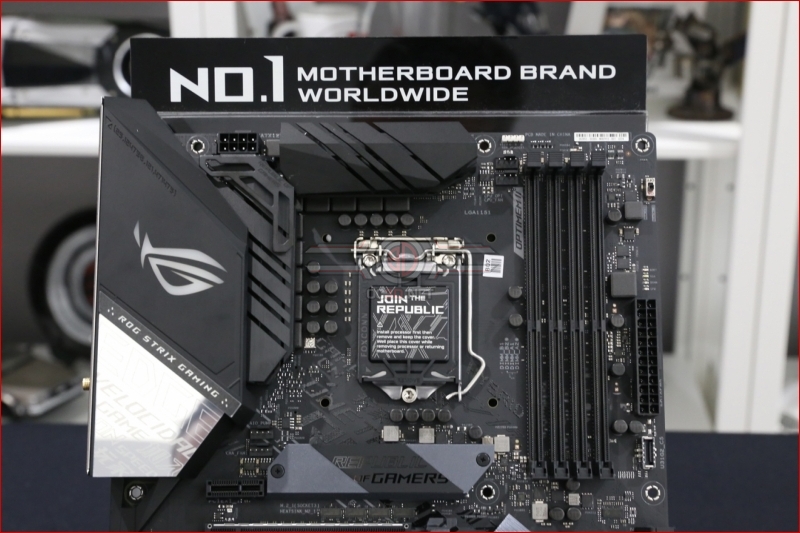 Often the lower half of a motherboard has fewer detail touches just because of the need to provide so many headers, but the Z390 Strix-E still manages to squeeze in some interesting elements. The chipset heatsink looks fantastic and, somewhat surprisingly, eschews the ROG eye in favour of just the ROG letters and Strix branding. Whenever we see "The X of Champions" we can't help but mentally fill in the word breakfast, although that might be because we're 50% caffeine. The main two PCI Express slots have the all-important bracing that has greatly reduced the number of graphics cards that have pulled the slot off the PCB. It's only when you reach the SupremeFX audio section of the Z390 Strix-E that any caps appear which aren't black. It's a very nice looking thing. 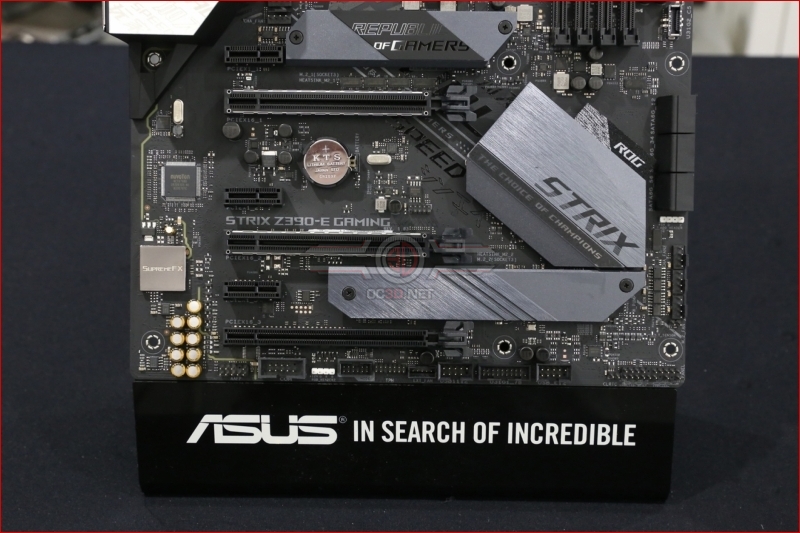 With the 9th Generation of Intel CPUs supporting 8 core models it makes sense to provide an extra source of cooling for those extreme overclocking scenarios and the Strix-E does it by including a bracket onto which you can mount the 40mm fan we saw on the previous page to help route some air across the power phases. Hopefully when we come to test it we'll discover that ASUS have a particularly noise proof 40mm fan, because few until now have been tolerably quiet. 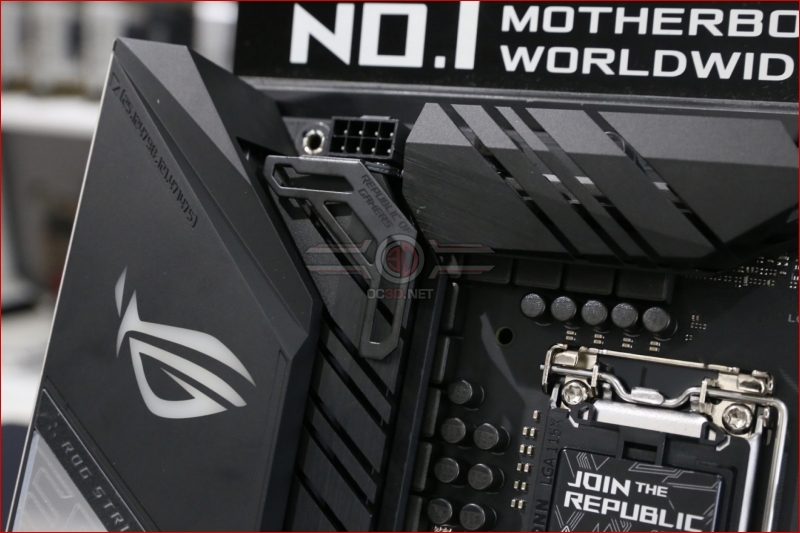 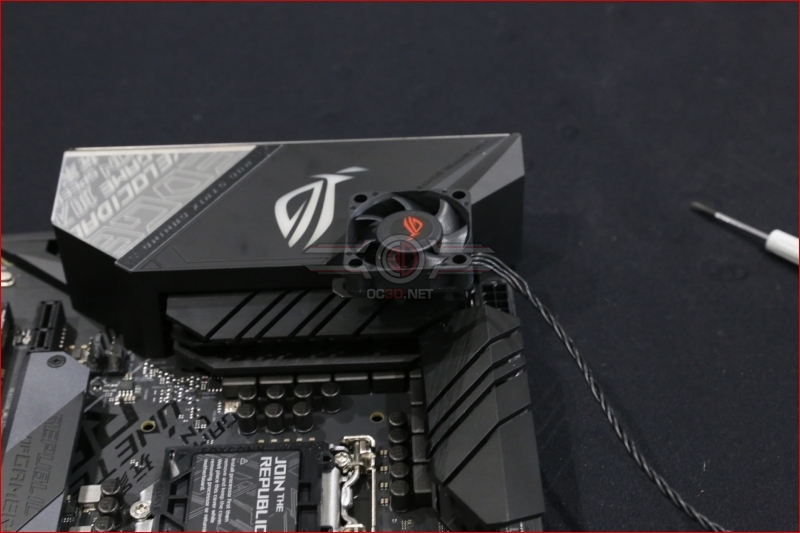 Amongst the more common features such as COM ports, front panel USB and the like we find a new header, the ASUS Node. What exactly this does is somewhat of a mystery as even ASUS are being somewhat vague. All we know so far according to the documentation is that it is a "bi-directional interface that allows ASUS motherboards to communicate with other system components". So far the FSP HDP1000 Hydro DPM PSU allows users to control the PSU fan from the AI Suite, whilst In Win are currently developing a 301 Chassis that has a LiveDash compatible OLED front panel. Anything that gives us more control of our system without necessitating routing thermal probes and the like has to be a good thing. Let's hope it lives up to the promise. 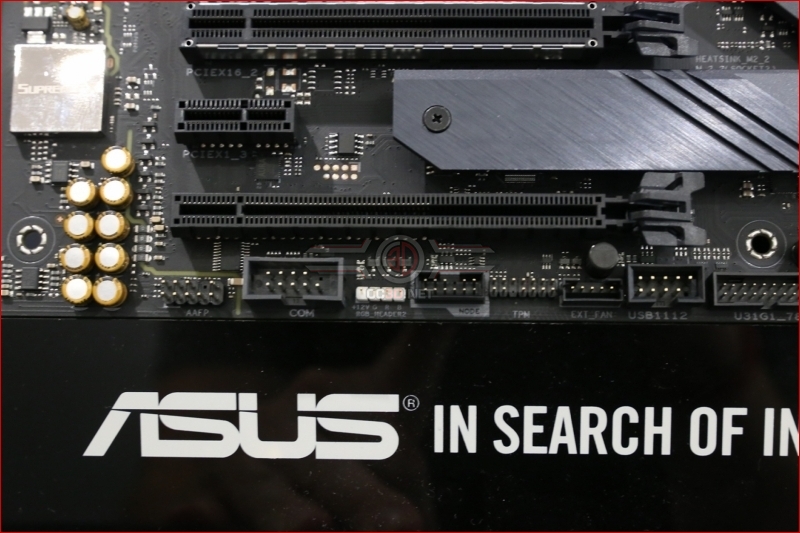