Moving onto our benchmarks that test the overall system rather than just how well the CPU works, Passmark bridges the gap by testing the CPU and memory just like AIDA or Sandra, whilst also testing storage and 3D performance similarly to PC Mark. What it does do beautifully is show the excellence of the Z390 chipset as a whole. 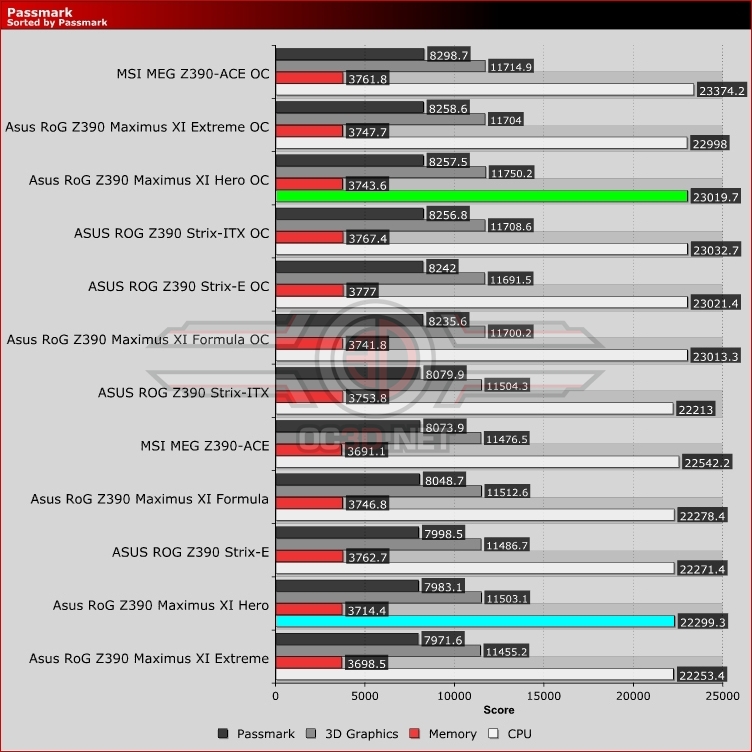 FTLN
Would be nice to know what your setting your voltage to in the bios on this board for the manual overclock, and also what is the the AI overclock pushing through the CPU on the voltage when its fully loaded ??

Its so easy to export bios setting nowadays..

Also how high are you getting your memory ?
Any chance you can try with a 16gb mobules as they are coming down in price rapidly ?Quote

Jake-From-State-Farm
I wanted the Extreme or the Formula, but have to admit I am sick of waiting for them to appear in the retail pipeline.

I'm trying to figure out if the Hero will be as good as the other two for me....Quote

Ofan
Quote:
It's a good board. I'm really happy with mine, only quibble is the great big heatsink that makes it hard to fit thick (60mm) roof mounted rads in my case.Quote

Peace Đ
You talked a lot about the price in the conclusion, but refuse to name any numbers? Even in the article's header the price is missing. May I ask why it is like that?Quote

henkhilti
Hi Tom and everyone,

I am new at this forum but wanted to share some knowledge.

When looking at your Blender and x265 benchmarks, all the Z390 Asus boards are clearly limited (power/current/otherwise) compared to the MSI Z390 ACE, when comparing the non-OC results using i9-9900K.

I know the MSI Z390 ACE (and GODLIKE) have no power/current limits (only CPU thermal limit default is limited to 100C but you can change that in the bios up to 115C).

If you want to know the power/current limits of your motherboard you can simply run the latest Intel XTU tool on your board and it will tell you if you are limited on:
Power Limit 1 (Long Power Limit),
Power Limit 2 (Short Power Limit),
Short Limit Duration:
IccMax (Max current draw allowed)
(AVX offset)

BTW x265 and Blender are both AVX loads (so AVX offset could also cause this performance difference).

In XTU you can even change those parameters on-the-fly in Windows if you want to test how it affects your benchmarks/programs.

XTU should work on any recent Intel motherboard.

I guess every brand will limit their low tier S1151 motherboards, to protect the CPU and the motherboard (like H310/B360).
Which is to be expected (nothing new).
But those lower-end boards usually don't end up at the reviewers.

So far we have only seen Asus limit their bios at least on the high-end models in reviews, like this M11 Hero (at least if you say "no" to the Asus recommended settings when entering the Asus bios)

I was just wondering what settings Asus is using for the limits.

I personally think the PL2 should be somewhere around 160W on every board, just to get rid of those ridiculuos power draws (over 200W CPU Package Power) in Prime95 v27.x or later (SmallFFTs/12K).

I have also seen boards limiting by IccMax but it's harder to predict at what point/load the cpu will be limited.

Please note that if you remove limits (power/current/thermal), you should check especially if your thermals are OK.

Especially VRM temperatures can get hot quickly (more and more boards show VRM/MOS temperatures in HWInfo64 Sensors but if your board doesn't, you should use other means to monitor).

BTW XTU can also be used to monitor which of the limits (Thermal, Power, Current or MB VR Thermal) is tripped during benchmarks/stresstests. (HWInfo64 can also monitor Thermal, Power and VR alerts but not Current limits).

If you find any limits on your Z390 motherboard and want to share them, please post your Power/Current limits in this thread
(just make sure you are running bios defaults and state the motherboard model, the bios version and the PL1/PL2/Duration/IccMax/AVX offset)
Usually the power/current limits are the same for any cpu, so ther is no need to have a 9900K.Quote
Reply