The Z390 chipset has, so far, proven to be a perfect match for the 9th Generation of Intel CPUs, with extremely consistent performance from both the Strix-E and Strix ITX motherboards. For those of you who are a bit more old school you'll have been looking out of the ASUS Maximus, always the flagship of the mainstream Intel chipset range, and we have a few in the office we'll be getting to in due course, but for launch we wanted to take a look at the cream of the crop, the motherboard that comes with every technology it is possible to squeeze onto a PCB, the ASUS ROG Z390 Maximus XI Extreme. ASUS have packed so much into it that we almost need to apologise in advance to your scroll wheel if you plan to look at the full specification table.

If you've been following the market for any length of time at all you'll understand that a new CPU always comes with a new chipset to go alongside it, and as the newest Intel CPUs are even beefier than their 8th Generation forebears the Z390 is the very thing. As you can gather from the fact that the Z390 is similarly labelled to the Z370 that is currently supporting the Coffee Lake CPUs, this is more of an evolution of the already excellent Z370, than a full on rejig. The Z370 motherboards haven't been around all that long and in the time between that launch and this one the market hasn't seen any major new technological additions. The cynical might suggest that the Z370 was only ever intended as a stop gap product, hence its brief moment in the sun. However, the Z370 had a strong enough feature set that the Z390 should be a refinement of the current motherboards and should see a stronger commitment to those features that have proven their worth. That's the best thing about market forces, ideas which prove untenable get left by the wayside whilst those which prove useful are retained.

Whenever a new chipset is launched the market always looks towards the flagship models from manufacturers to see what is possible from the new technology, whilst also getting a glimpse of the high end features that will trickle down to the more affordable options later on down the road.

Unsurprisingly the Maximus XI Extreme has a seriously meaty set of specifications. If ASUS had crammed any more onto the E-ATX PCB they'd probably need to get in touch with the Form Factor people and define a larger standard. Like the Maximus XI Formula the Extreme is equipped with all the new Intel Z390 features - USB 3.1 Gen2 and 2x2 AC WiFi - whilst also having the parts that separate the Maximus XI Extreme from the mid range motherboards. You get the LiveDash OLED display to keep an eye on your overclocking efforts, temperatures and the like. There is also a Aquantia AQC-111C 5G LAN for your high bandwidth networking fun and games. Elsewhere we have the more regular ROG accoutrements like the AURA lighting, GameFirst, Sonic Studio, Sonic Radar and support for Optane memory to speed up your SATA storage devices. But enough blather, let's look at it in the flesh. 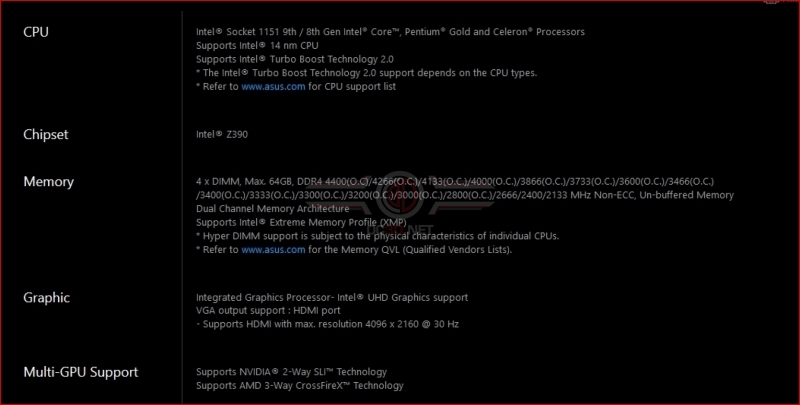 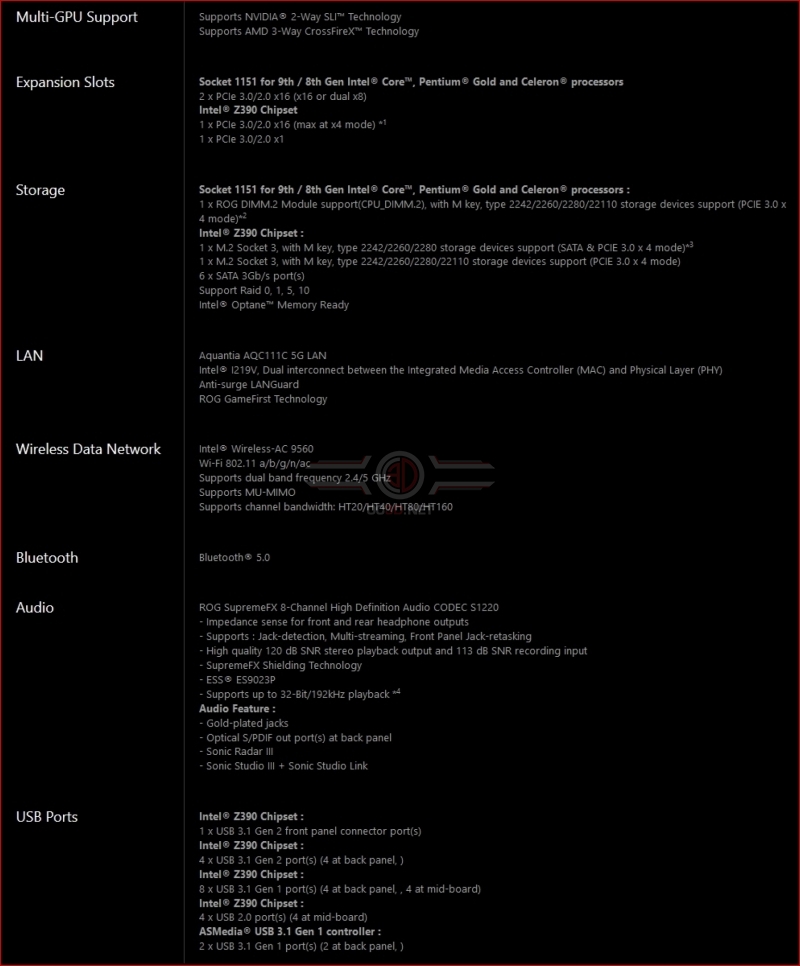 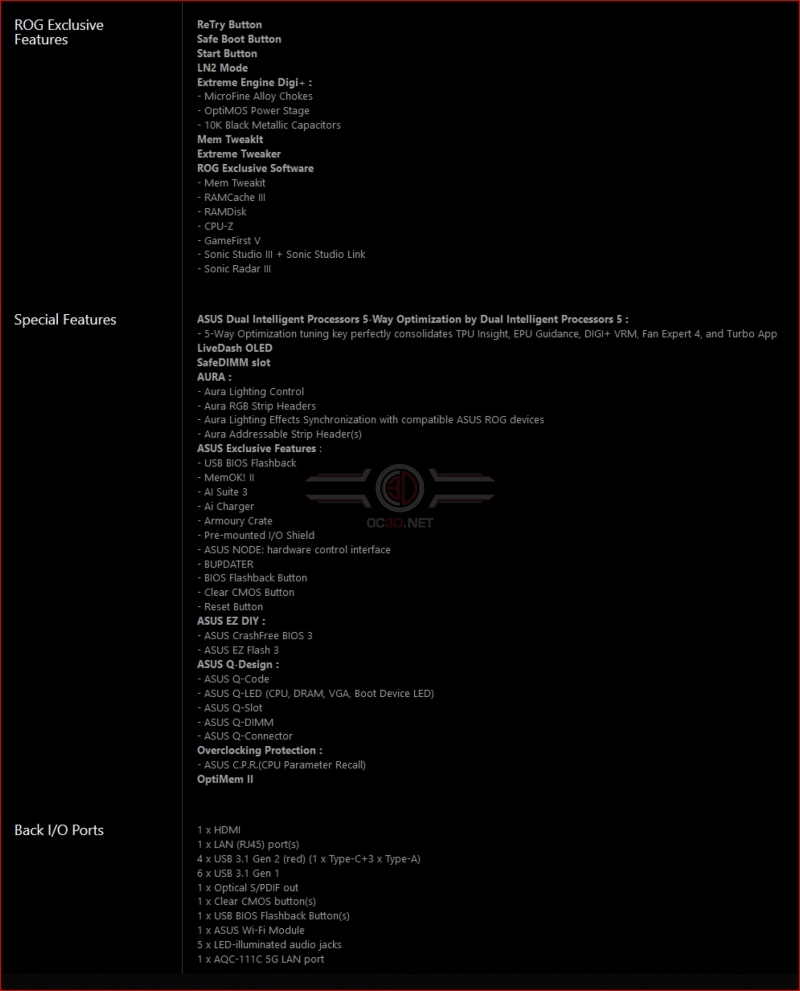 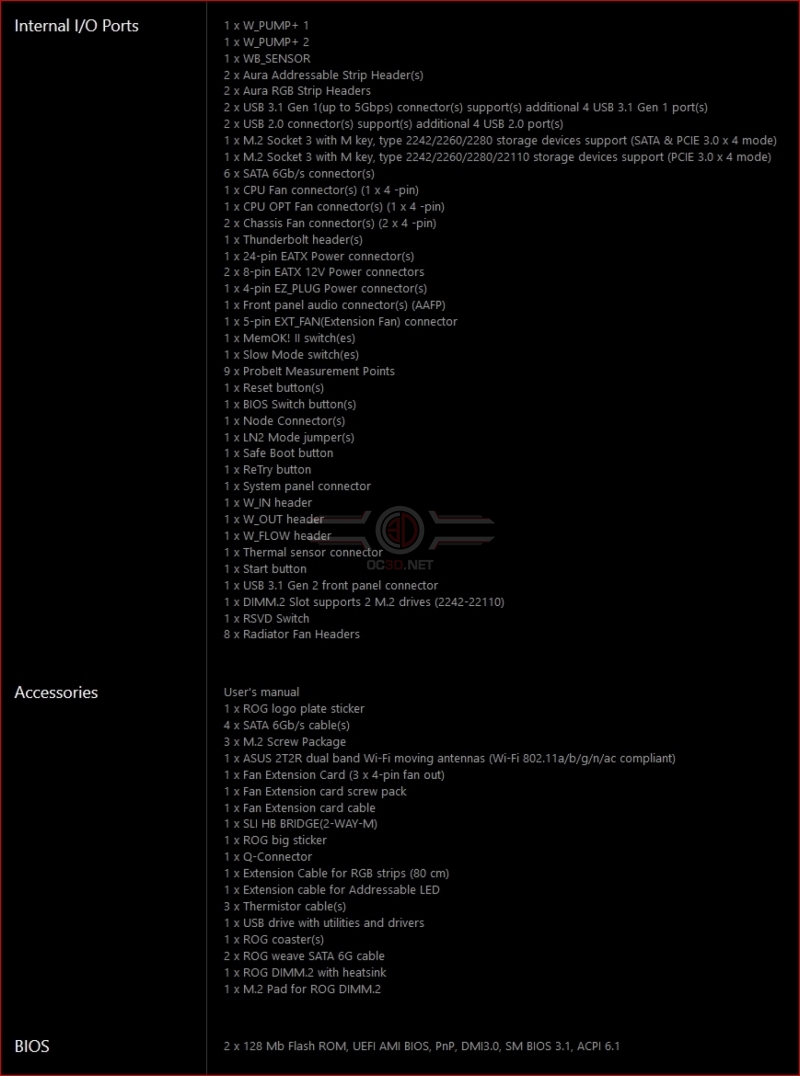 Avet
Really impressive. But I have one word for you ASUS... PLX!!! On a board this high-end, this expensive, and with tons of connectivity PLX is a must. M.2s 99% of the time won't use all 8 lanes that you give them, but 2080 Ti might get choked with 8 lanes. Let PLX juggle the bandwidth as it is needed.

It would be a dream if Intel would up the PCI-E lane count on 20, or 24 for top of the line mainstream CPUs.

Apart from lack of PLX this board is a dream.Quote
Reply