The latest generation of the Ryzen processors are bringing a lot of high end features to the table, without requiring the fiddling about that some of the Threadripper setups require. They are in the happy medium between chucking out huge performance numbers, but in a manner that doesn't require endless tinkering under the hood and instead lets you just get on with the business of doing.

With the introduction of PCI Express 4.0along with the power requirements that high core count CPUs bring, there has been a bit of an adjustment in the general price area in which the AMD motherboards reside. If you stick with your old mental image of how much an AMD motherboard should cost then pretty much all the X570 offerings are going to come as something of a shock to the system, so perhaps it's best to rejig your mental map right now. The short version is that umpteen PCI Express lanes and the power phases necessary to keep the Ryzen 9 series fed with juice isn't free, and those engineering costs are passed on to the consumer, putting the X570 more in line with the pricing you'd expect from the Intel range. After all, the X570 straddles the line between the Z390 and X299 chipsets in its abilities.

The ASUS Strix range of motherboards has always been fabulous value for money, not quite hitting the wallet emptying heights of the Maximus/Crosshair/Rampage prices, but without noticeably compromising any performance or features to hit a more mid-range price tag. The X570 Strix-E firmly rocks up in the middle of the ASUS price spectrum. However, just because it's mid-priced doesn't mean that you're having to put up with wheezy power phases or inadequate overclocking options.

It won't come as a shock that the Strix has the full set of features available on it. ASUS don't apply the ROG branding to just anything you know. Naturally with the X570 chipset launch the banner feature is undoubtedly the inclusion of the latest PCI Express 4.0 which massively increases the available bandwidth for your M.2 drives and graphics cards. The speed at which the market adopted the M.2 solution is nearly as fast as the drives themselves, and given that they can easily saturate the bandwidth available on PCI Express 3.0 - and thus limit the headroom of your graphics card - it is a welcome relief that the latest iteration should, until drives are launched that flood it again, alleviate that problem for a while. Although there are some PCI Express 4.0 abilities built into the chipset you'll require a Ryzen 3 processor to make the most of it. Elsewhere the X570 has been upgraded from USB 3.0 and 3.1 to the latest USB 3.2 Gen2 both in front and back sections. Add in a 2.5G LAN alongside the Gigabit offering, and the latest Intel Wi-Fi 6 802.11ax and there is much to be excited about regarding the ASUS Strix X570-E. 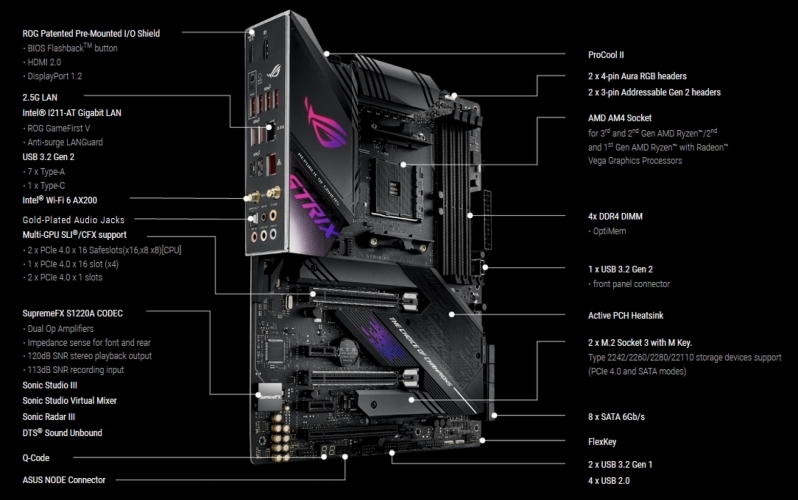 There are three headers at the top for your AIO pump and CPU fans, supporting both PWM and DC fan types. At the bottom edge of the motherboard is ASUS own Water Pump+ header, which supplies 3 Amps enabling even the heartiest of water pumps to be connected to your motherboard rather than running off of the power supply directly. 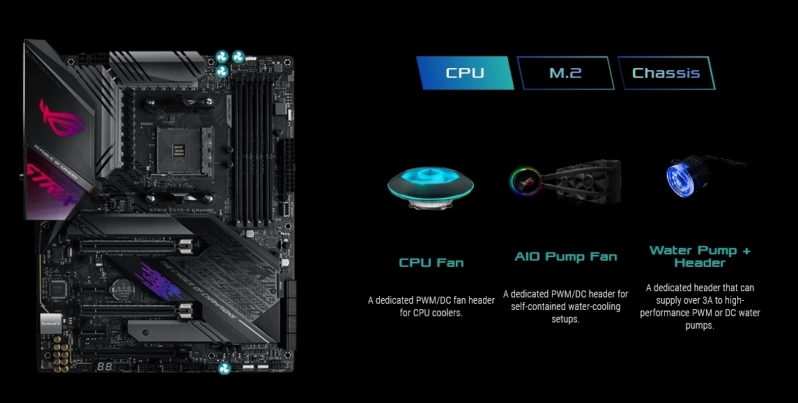 There are three non-specific fan spots on the Strix, just above the uppermost M.2 slot, and two below the lower M.2 socket. The second of these two is designated an M.2 cooling fan, but naturally you can use it as an air intake if you choose. 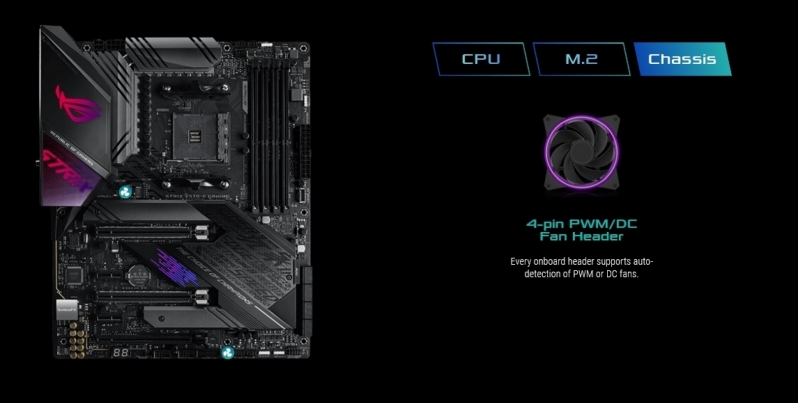