Last week we reviewed the latest in the illustrious line of ASUS ROG Rampage motherboards, the Rampage VI Apex.

Any time a new Rampage motherboard is released there is always a combination of eager anticipation and slight nervousness. They have always been at the very forefront of the technological war as well as being a precursor to the type of features that you can expect to find on more mainstream models in the upcoming months. The longevity comes with rarity, this is only the sixth edition of the ASUS ROG Rampage yet it began all the way back on the LGA775 socket with the X48 chipset. Back then the idea of a harmonious colour scheme had yet to be tried and the board was a combination of blues, whites and gigantic copper heatsinks. How times have changed.

So we've established that for ASUS to feel confident enough to produce a motherboard and name it Rampage already brings with it a level of expectation. The Rampage VI Apex also casts a long shadow because we've only just looked at it and it was incredible. The very cutting edge of motherboard hardware.

Many of you must have looked at that and found it as desirable as we did, but wouldn't it be good if ASUS produced a model targetted more at the gamer than the enthusiast? Enter the Rampage VI Extreme.

Just because the Extreme is aesthetically aimed more at the 'lights and loveliness' gamers than the more serious enthusiast that the Apex targetted doesn't mean that ASUS have also trimmed off any of the features. In fact the Extreme comes with more than the Apex did, thanks to additional DIMM slots, vastly improved lighting, and the "LiveDash OLED" that puts onto your motherboard the type of display we last saw on the SteelSeries Rival 700 mouse. Black and white OLED that supports 2 bit GIFs as well as letting you know the current state of play. But why discuss the overview when we can show you the Rampage VI Extreme in the flesh? Let's do that then. 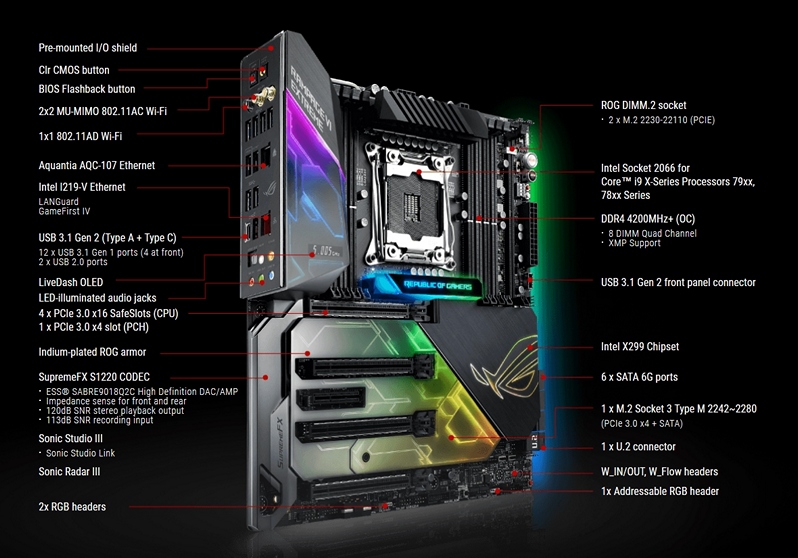 Eddie long
What an epic board , i,m dreaming already ,, thanks for the great review TTLQuote

Gothmoth
and what will be disabled without a 1000$ cpu...

but ok to be fair... someone who buys a 650 euro mainboard will probably buy at least the 7900x.Quote

Avet
I am gobbling on my keyboard. This is masterpiece.

I am bit disappointed that we didn't get uber review like we had on Rampage V Ed10. I really enjoy proper TTL reviews. And i really like your shirt Tom.Quote

Thessian
OK, TTL while I was lurking on OC3D page for ages this review finally encouraged me to create an account.

I was so set on Apex after your review. Waiting for delidded 7900X from Caseking, have memory, most storage. Just not the board.

Apex has much appeal to me (despite all weird/bonkers cut-outs on the PCB ) with only 4 DIMM slots and possibility of connecting 4 NVMe drives using both DIMM.2 AICs (even ordered another 960 1TB just for that reason). Plus on top of that, OCUK have plenty of Apex boards in stock. I was so ready to order Apex by Monday and now this...

You dropped this R6E bombshell last night and I have to get it. I was drooling so much I've downloaded and replayed video 5 times on the bounce and twice today... I really hate to wait another month, but I have to get R6E, not the Apex. For now nobody has it in stock anywhere in Europe. Whoever is first gets my money.

Kaapstad
All the connectors at the bottom are covered by a 4th card. As this board is aimed at people using 4 way mGPU setups this is very poor design and would be very easy to correct by turning the connectors through 90 degrees.Quote
Reply