The ASUS Rampage range has long dominated the premium end of the motherboard market. From the early days of the X58 based Rampage 2 all the way up to the X99 Rampage V 10th Anniversary Edition, it's been an endless series of high-end, no compromise, products that - in a manner akin to the Mercedes S Class - shows us what the future will hold.

With the release of the X299 chipset and the forthcoming 12 and 18 core Intel CPUs this seems like the perfect opportunity for ASUS to bring a new version of the Rampage out, combining the lessons they have learned from all their modern AURA series of motherboards and their regular Republic Of Gamers design teams voodoo to release the Rampage VI Apex.

Apex [n] - The highest point of achievement or climax; The peak of something.

Given that ASUS have been moving away from their Extreme/Formula/Gene school of model naming it wasn't too surprising to see the new Rampage VI labelled the Apex. What we're hoping is that there is enough performance and features for the extreme enthusiast to justify such a confidence appellation.

If you've been paying attention to developments in both the ASUS range and the other X299 motherboards then you'll have a fair indication of the type of features that are available on the Rampage VI Apex. As you would expect from a motherboard with such a premium price tag and at the very peak of the ASUS ROG range, the Apex is equipped with absolutely everything that is available.

Let's start with the memory, where the Rampage VI supports 64GB of DDR4 at 4133 MHz. Anyone who has ever felt their memory didn't quite have enough bandwidth nor capacity will be pleased by this development. Other DIMM slots can be utilised to take advantage of ASUS' ROG DIMM.2 technology which enables the Rampage VI Apex to support up to four M.2 storage drives. Given that this is a motherboard for those who demand the absolute best then the insanely high performance of an M.2 drive when compared to even a quick regular SSD will surely see all four M.2 slots populated.

Elsewhere ASUS have included the very best of what they have to offer to ensure maximum overclocking prowess. Loads of fan headers and water pump headers help those of you with a suitable custom waterloop to maximise your capabilities, whilst a whole suite of LN2 features - which we'll focus upon on forthcoming pages - mean that those of you for whom nothing but a world record is good enough have all the tools at your disposal necessary to put your name in lights. Of course such high end overclocking requires beefy power phases to keep everything supplied with smooth power and the Rampage VI Apex has NexFET MOSFETs kept cool with dedicated heatsinks and heatpipe, Black Capacitors and Microfine Alloy Chokes. 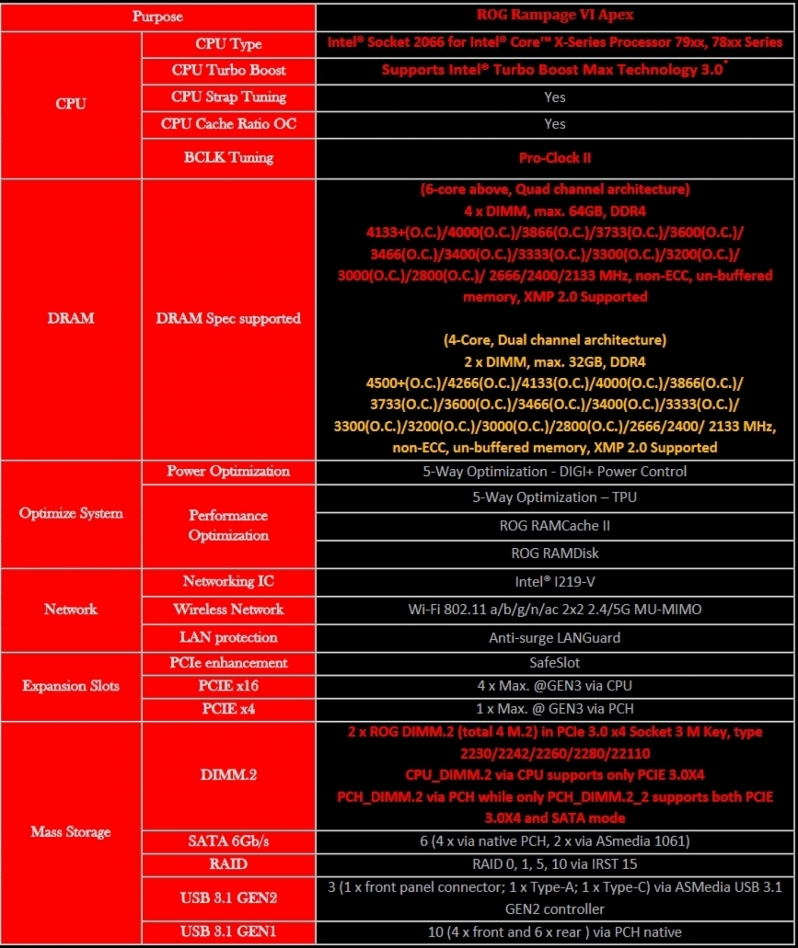 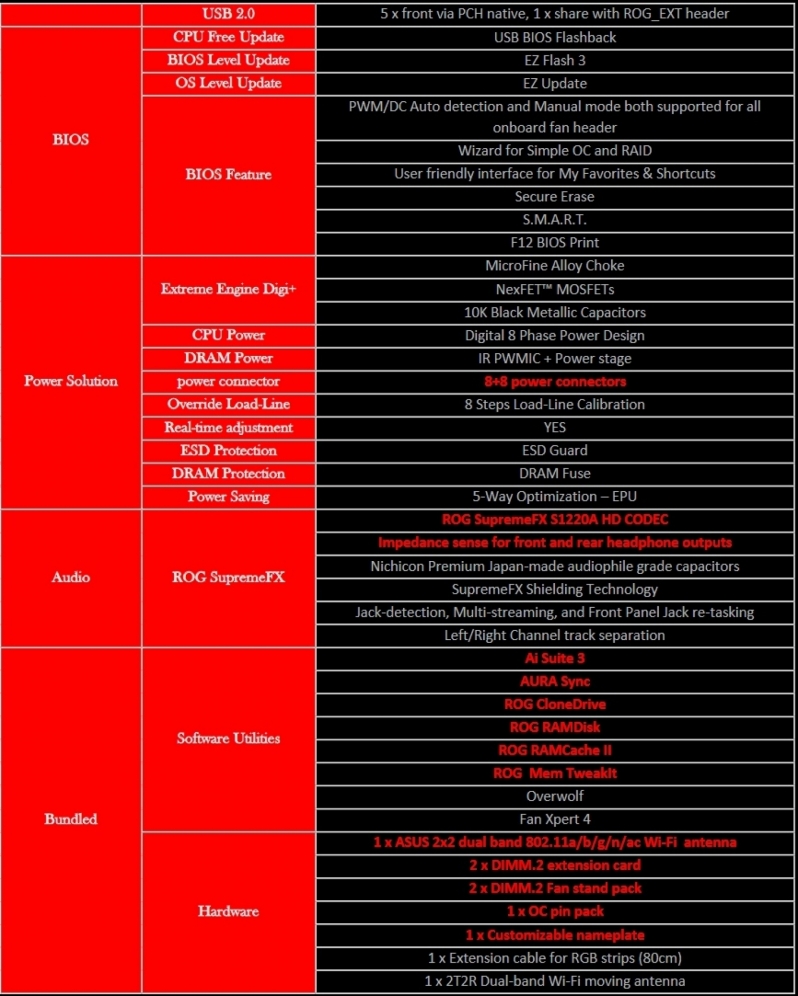 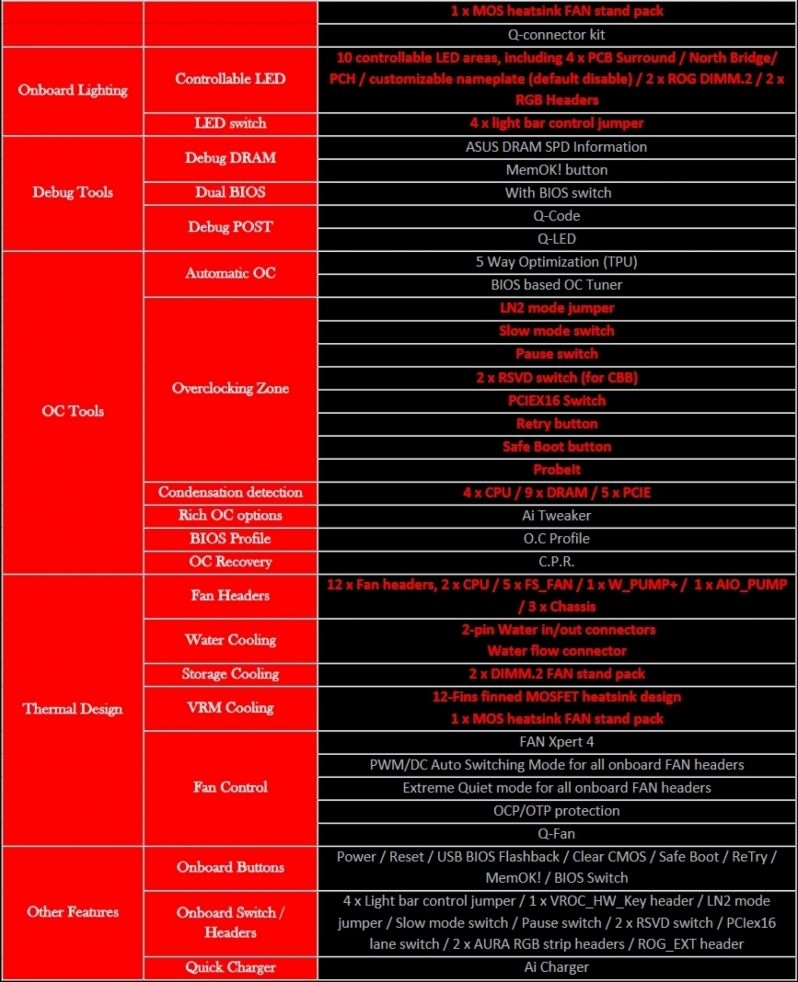 Avet
This board is perfect to utilize that external water cooling kit you have Tom. But i think you wouldn't mind setting up some proper loop to test this bad boy.

Too bad you can't test it with delidded CPU.

I like they consulted overclockers in designing this board. I am surprised you didn't give it ultimate reward like to the Maximus IX Apex.Quote

Kaapstad
Quote:
I am still laughing at that !!!!

There is a bad fault with this board and all the Rampage boards for that matter if you are using 4 cards. All the connectors at the bottom of the board are covered by the 4th card which makes them useless. This could have been overcome by turning the connectors 90 degrees like they have done with the molex connector found on Rampage boards.

Also having the connectors turned 90 degrees would make cable management even easier.Quote

AlienALX
£419. Why does that sound like terrific value for money?

Stunning isn't it? Asus at the top of their game. They really are. I also like how they continue those looks all the way down to the bottom now too (B350 Strix).Quote

JLR
Great review, love the board. The way the bottom is off cut and the access to the SATA ports is great. As Tom said it looks like the board is capable of giving more if you have a de-lidded CPU.

28:07 in the video has buckled me, had a mouthful of Pepsi at the time and my Monitor / Keyboard nearly had it second hand