Sometimes when we're attempting find a simile for the products that pass through our offices we end up reaching for the hoary old standby, cars. Perhaps it's because they are so similar to PC components in their aims, pricing and levels of desirability that it is an easy comparison to make, or perhaps it's because the only other simile we can think of about expensive things which we'd like very much involve Milla Jovovich and a bathtub full of custard and that's hardly fitting. Or common. So allow us a temporary diversion.

If you've paid even scant attention to the world of high performance cars you'll know that the majority of them have special editions which remove a lot of the tech and features at the cost of an even higher ticket price. The BMW M3 CSL is a regular M3 without the comfort or rear seats, they add in a climbing frame and they expect you to pay a lot more for the privilege. If you're churlish enough to want the comfort and seats they'll put them back in for even more money. But that stretches beyond our remit here. The point is that if you want a stripped down, performance-oriented car you have to pay more than you'd imagine to own it. The Apex is a stripped down, performance-oriented motherboard so you would expect ASUS to have followed the rest of the world and charged even more for a motherboard that nearly guarantees you'll break some personal high scores. Not so. In fact the Apex counts, in relativistic ROG Maximus IX terms at least, as affordable. A mere £300. Sure it's not Z77 levels of affordable, but given the Z270 pricing it definitely hits the ROG mid range.

Why all this discussion about price, we hear you ask? Either that or our meds are wearing off. It's because the performance is so obviously brilliant, nay luminescent, that it almost goes without saying. You might be one of those people that skips straight to the conclusion in which case more fool you. The Apex is a monster. An absolute overclocking titan. A Bench stable 5.2 GHz from the CPU is comfortably our best yet, and for our final OC testing we got a meaty 5.16 GHz from103.2 BCLK and a 50 multiplier at 1.4v whilst also squeezing 4266 MHz from our DDR4 kit. This is a level of performance that goes above and beyond merely fast into new territory. If you've ever felt like dipping your toe into the overclocking waters then you can't go wrong with the Apex. If you're an old hand at it then we are certain that you'll get some new personal bests with it. The performance is transcendent. So there is little else to say about it other than if you buy it and don't push the envelope you're almost performing a PCMR sin.

It's not a one trick pony though. The looks are sublime. We didn't realise how accustomed we'd become to rectangular motherboards until we saw the Apex, which... isn't. It's rectangular ish, but the cut outs really make it shine both figuratively and literally. The additional space mean that the plentiful AURA lighting options have even more room to breathe, ending up with the brightest backlighting we've ever seen from a product. Colours are rich and it isn't just a logo that lights up but, as you saw on earlier on, most of the motherboard. It's perfect for shows, demonstration builds its for those of you that have a vision for something special or that bit different.

So there is tons of performance, amazing looks and all at an affordable price. What's the catch? Hmm. Perhaps, if we were being super picky, the claim that the DIMM.2 slot is for cooling is negated by the fact it's behind the ATX power input. We think it's actually to stop sub-zero coolers getting condensation on their valuable NVMe drives. Maybe we think that 4 SATA ports is a couple too few. Just possibly we'd like another front panel USB 3.0 header too, sames goes for normal PWM fan headers. But these are tiny, nitpicking, negligible issues on what is, otherwise, a fairly flawless product. It's the ultimate expression of the ROG ethos, blistering performance allied to game-changing looks. We love it, and the relatively affordable pricing is just the cherry on top, which is why it is the first product that has won the OC3D Ultimate Award. The bar has been raised, a new standard has been set casting all that come before it into the shadows. ROG is back and its back with a vengeance. 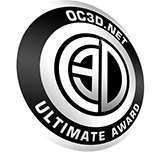 Discuss your thoughts about the ASUS ROG Maximus IX Apex Motherboard Review on the OC3D Forums.

tinytomlogan
Quote:
You were fast! Looking forward to seeing the cables fella. Enjoy!Quote

Bartacus
I can't wait to see all these goodies come to the X99 revamp! Nice review as always Tom!Quote

The M.2 thing makes my teeth itch, surely there is a better solution maybe a daughter board which could use a SSD bracket and ribbon too it.Quote
Reply