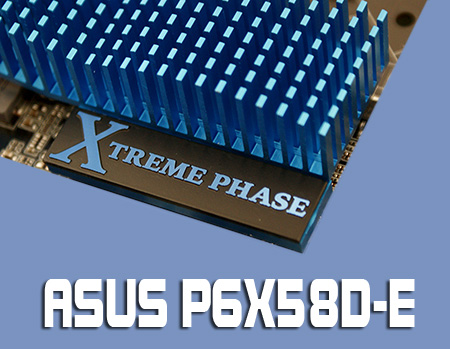 The 775 generation of motherboards made a lot of our jaws drop as the more extreme motherboards headed towards, and sometimes even upwards, of £200. For those of us brought up on £80 motherboards this was quite a shock.

Of course once the LGA1366 X58 motherboards hit the market we all quickly realised that average ones were around £200 and a full-fat all-the-features model could cost more than the processor. Thankfully as time as gone on we've seen some cheaper models released that, although not cheap, are at least affordable for the more modestly paid of us.

These usually come with huge feature cuts though to get them down to an affordable price. Today ASUS have taken their excellent P6X58D Premium motherboard and produced an E version that weighs in around £170. Are we sacrificing a lot to get it to this price point or can it still seperate the Dijon?

As always we pop along to the ASUS website and grab the specifications for you.

Of the things we can see in that list it's clear that not a lot of hacking and slashing of features has gone on. We still have USB3.0, SATA6 and the ALC889 on-board sound. So what is different between this and the Premium model?

As far as we can see the following changed have occured. There are two fewer heat-pipes on the chipset cooling. We only have a single Marvel Gigabit rather than the twin LANs of the Premium. The on-board reset button has disappeared. And rather than the Marvel 9123 of the Premium we have a Marvel 9128 which actually should provide more robust support for RAID.

All in all then not a lot is missing. So let's have a look.

Sunny Sahota
If I was looking at building an i7 980x rig, would the Premium be the better board to take based purely on the processor?Quote

tinytomlogan
Wouldnt make any difference in that respect tbh.Quote

Sunny Sahota
hmm might look in to getting this over the R3E if its not in stock by the time I come round to buying it. looks like a fantastic board. thansk for the great review

GrimReaper
Nice board! how much does it retail for?Quote
Reply