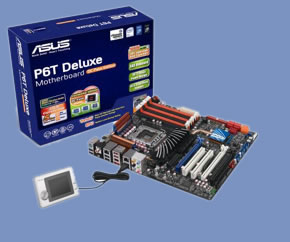 It's clear from the outset that the Asus P6T Deluxe is a quality product. Not only is the package well thought out and very well presented as per usual Asus standards, the motherboard itself is a masterpiece of current PC technology. Comprising the latest Intel chipset, triple DDR3 and the option of either SLI or Crossfire, it shouldn't matter whether you prefer the red or green camp, either way you are going to win with the Asus P6T Deluxe.

The OC Palm only adds to the allure of the package and I certainly was not expecting the usefulness of the product. Couple this with the excellent BIOS, software package and power saving features of the Asus board and you have a very rounded, if somewhat expensive product.

If there was a single criticism I could aim at the P6T, it would be the proximity of the PCIe slots. I cannot see the sense in populating the board with 2 PCI slots next to each other and then cramming 2 PCIe slots together at the bottom of the board. If I were a cynic then I would think that Asus were forcing people who want tri SLI/Crossfire to buy the Rampage II Extreme or one of the heavily anticipated Evolution boards. That said, if you have no intention of using triple graphics cards then this is a non issue.

The benchmarks we ran today were perhaps a little unfair on the P6T Deluxe as the Nvidia setup was using a top of the range CPU, whereas the Asus had to 'make do' with entry level i7. Nonetheless, I think it showed the potential of the motherboard and I have no doubts that if the two setups were compared clock for clock or at their maximum overclocked speeds, the P6T would easily come out on top. For now though it's our only basis of comparison but stay tuned because a tasty Gigabyte motherboard has just arrived at OC3D towers which will give a better insight to just how good or bad the P6T deluxe really is among the current crop of X58 motherboards.

The Mediocre
- No onboard CMOS reset switch
- On board audio

It's very difficult to give out an award for the P6T Deluxe as the product has yet to have a direct comparison but based on todays review, I have no hesitation on recommending the product. Once the board has had a comparative review I will add any awards and adjust the current score as appropriate.

Buy the Asus P6T Deluxe from our retail partner Ebuyer for £275.

Thanks to Asus for providing the P6T Deluxe OC Palm edition for todays review. Discuss in our forums.