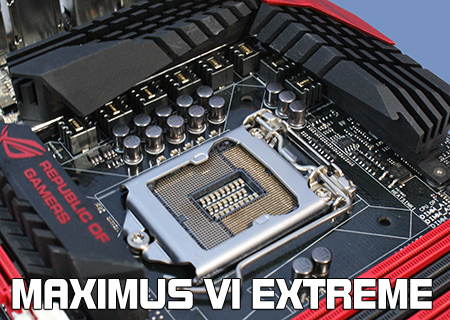 So far we've looked at some affordable Z87 motherboards that all provide excellent, and in some cases amazing, performance. The quality and uniformity of the Intel Chipsets has reached a point wherein it's extremely difficult for a manufacturer to make a significant performance difference solely by the design of their motherboard.

One of the consistently high performance motherboards is the Maximus range from ASUS. The Maximus has always been a serious proposition for anybody who wanted to get the very most from their CPU. Although the Maximus IV was brilliant, with the Maximus V we started to see that although it was still great, everyone else had caught up and it no longer provided value for money.

Today sees us reviewing the Maximus VI Extreme and the question on everyone's lips is, is the M6E still the king of performance motherboards or has the chasing pack finally caught up?

According to the ASUS website the Maximus VI has five PCIe 3.0 slots, which obviously isn't the case. Someone needs to proof read. That aside, the Maximus VI Extreme has everything you could hope to find on a motherboard. WiFi, Bluetooth 4.0, ten SATA 6Gbps ports (yes 10), eight USB ports on the rear with a further eight available internally. As well as the regular ROG features the Maximus VI Extreme comes with an OC panel, for instant control. So let's take a look at the board itself.

Feronix
Ohdear! Very curious, will read it in a bit

WillSK
Now i see what you meant when you said I'd change my mind about MoBo in the ultimate gaming rig thread. What a terrible price/performance ratioQuote

murphy7801
I find this totally unshocking tbh MSI and Gigabyte are stepping up there game ASUS hasnt done anything amazing in awhile.Quote

OmegaStalker
Black and red is getting a bit done now needs a couple years off now anyways, the one with the thermal armor ROG board looks loads better anyways if your into thermal armor otherwise the MSI with the hints of yellow look good and the gigabyte boards are always good performers with decent looks for once with good customer support at anyrate Asus its time to stop Appling it out and cut your pricesQuote
Reply