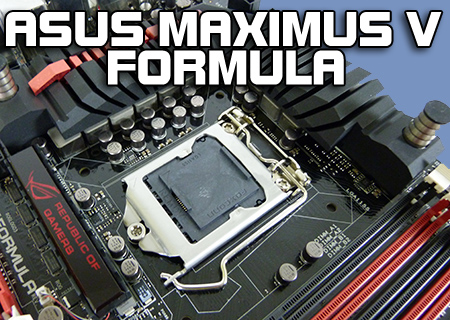 The ASUS Maximus V Formula is a very difficult motherboard to come to a conclusion about.

It's available in two versions, the plain motherboard which is priced at around £230, and the one we have on test today that comes with the ThunderFX unit, which is a whopping £280. Now usually we leave the price to the end and try not to think about it when summing up our thoughts, but because today's model is definitely in the enthusiast bracket, and even the vanilla version still counts as pricey when compared to other Z77s, it becomes impossible to ignore the elephant in the room.

Performance wise the Formula is more impressive at stock than it seems to be when overclocked. That isn't to say that the overclocked performance is bad, indeed it's right on a par with just about every other Z77 motherboard that we've tested. Instead the majority of the graphs show its excellent performance when comparing a stock setup to the other stock setups.

Design wise it's very good, and very easy to work with. All the fan headers are well located, the DIMM slots have the excellent single-latch system and the PCI Express slots have the usual ASUS large tab for removing graphics cards. This is a vast improvement upon the side-latch that we've seen, and lost skin off our knuckles on, so often. The heatsinks are chunky, but in an entirely good way. The dual-purpose nature of them is a boon to anyone who enjoys water-cooling and will save you a chunk of change in sourcing a specific waterblock for this design. If you, like us, love rugged engineering then you'll definitely like the Rampage IV Formula.

The ThunderFX, which is worth a good £50 of the price-tag, is harder to like. Yes it provides good quality audio and is compatible across a range of hardware applications, but the Supreme FX IV audio is very good, and if you're the kind of person who owns both a PS3 and a XBOX 360 alongside your Apple device, then it's very likely you already have dedicated audio solutions. This is one of those things that would be a nice bonus but likely to be left in the box in most scenarios, but almost becomes a source of frustration when it's meant you have to pay so much for it. Of course if you don't want to you can buy a non-ThunderFX Maximus V Formula, and that would be our recommendation between the two versions, unless you're desperate for a headphone amplifier.

Would we recommend the ASUS Maximus V Formula above other considerations though? Realistically, no. In pure performance terms it just doesn't do enough to justify its lofty price-tag. It might be ripe with features, but so are most Z77 motherboards and there aren't any on the Formula that are so desirable it becomes a clincher. The kicker for us is that the MSI Z77A GD65 is £100 cheaper, and yet equals or outperforms the Formula. Sure you might be willing to pay a premium for the red and black colours and the ROG branding, but £100 of a premium? That's too steep for us to seriously recommend. If it was £160ish for the regular model and £200 for the ThunderFX one, then it's probably edging a Gold. As it is it's much more expensive than its rivals for very little discernible gain, and for that reason we can only award it our OC3D Silver Award.

Thanks to ASUS for providing the MVF ThunderFX for review you can discuss your thoughts in the OC3D Forums.

Lollipop
I don't really like the barbs and the heatsink design in general.Quote

dipzy
same here, the heatsinks have that rubbery look/texture but other than that great board

Ciric
Yea, why can't they just make some 1/4 threads, and close it with some plugs with the top in the same material as the heatsinks :/Quote

tinytomlogan
Quote:
Pretty much what I thought too.Quote

AverageNinja
I don't think it looks that bad at all. And maybe you could just get the dremel out and cut it off? That would ruin the watercooling possibilities on that heatsink though.Quote
Reply