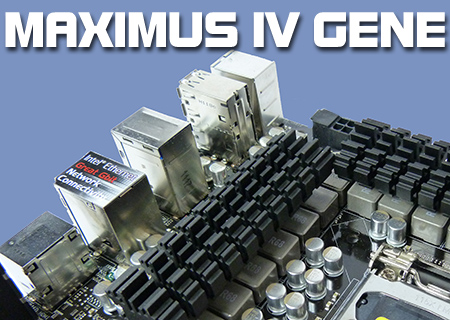 Aristotle wrote that "Change in all things is sweet" and change is something that the Maximus IV knows very well.

Normally the ASUS range consists of an Extreme, a Formula and a Gene variant of the same basic design. The Maximus IV definitely changes this as the Extreme is two versions of the P67, the original and then the B3 revision which fixed the SATA issue and otherwise enhanced the basic model.

So we'd expect the Gene to be a P67 B3 based motherboard but in micro-ATX format?

Anyway, let's see what is contained within this pocket powerhouse.

﻿﻿﻿Despite its petite proportions the Gene-Z is stuffed to the gills with all the latest technology as befits a Z68-based board. We've got a couple of SATA-III ports that can handle Intel Rapid Storage Technology which uses a SSD to greatly enhance the performance of a standard mechanical drive. There are two USB 3.0 ports on the back with expansion capabilities for two more internally.

The big thing the Gene-Z has is integrated graphics. However unlike many boards that provide a plethora of outputs for IGP, the Maximus IV Gene-Z only has a HDMI output.

SieB
Quote:
Wrong board matey, this is the Matax z68 board it's not the one from the Shadow H2O build.Quote
Reply