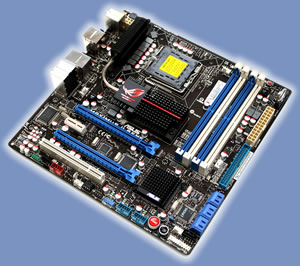 The ASUS Maximus II GENE may be small, but it certainly packs a punch. Although it's been almost a year since we last reviewed a Socket 775 motherboard here on Overclock3D, the return to this old favourite was certainly a pleasant one and showed that it is still is a very capable platform when coupled with the right CPU and copious amounts of overclocking.
Thankfully this is also one area that the Maximus II Gene excels. Using nothing more than an off-the-shelf E8400, the board broke the 4GHz barrier with ease. In fact, aside from a manual increase of the FSB getting to this stage required almost no manual labour with all of the BIOS options set to [AUTO] and the Maximus managing items such as the dividers and voltage completely on its own. Only when we wanted to take things one step further was some manual tweaking involved, which once again proved fruitful with a maximum overclock of 4.3GHz.
Maximum FSB results were also very favourable with the Maximus hitting 530MHz with only minor tweaking. The board did feel like it was capable of so much more, but unfortunately the stubborn 1066MHz DDR2 kit used for the testing hindered these results and active cooling on the Northbridge would have also been required.
But it's not all about the overclocking. Although this is one area that the Maximus II GENE is clearly at home, credit has to be given to the ASUS designers for cramming all the features of a full-fat ATX motherboard in a standard mATX form factor. As mentioned in the Rampage II GENE review, this opens a world of opportunities for small-yet-powerful PC systems with LAN rigs and gaming HTPC's being just two of the possibilities.
Other features such as the on-board power switches, modular Northbridge cooling, on-board X-Fi and the insanely comprehensive BIOS are also more than worthy of mention, as is the excellent packaging and reasonable bundle that ASUS are quickly becoming renowned for. In short, mATX has been re-invented and the ASUS Maximus II GENE is at the forefront of the revolution.
The Good
- All the features of an ATX motherboard (and more).
- Layout not too cramped. Plenty of room for large coolers.
- Extremely capable at overclocking.
- On-board X-Fi sound.
- Usual ASUS RoG attention to detail in the looks and packaging.
- Fully featured BIOS.
- LGA775 platform for those who aren't willing to re-mortgage for LGA1366.
The Mediocre
- Passive cooling will only get you so far.
The Bad
- Absolutely nothing.

Ghosthud1
wow that was weird i was just looking at this board on scan thinking about getting one, thanks for teh review

JN
No probs. TBH I REALLY like this board. SO much I'm tempted to buy one and build an 'uber htpc'.Quote

Ghosthud1
lololol just what im thinking mate,and also what shal i do? either wait for a p55 matx board or just get this one?Quote

Ham
Jim, you have officially ruined my plan for payday.

Great review, looks to be an awesome board!Quote

maxw
wow - I didn't realise this one was coming out!

It looks a lot better (aesthetically) than the DFI equivalent, so I may well get one.

Thanks for the brilliant review Jim!