Test Setup
To ensure that all reviews on Overclock3D are fair, consistent and unbiased, a standard set of hardware and software is used whenever possible during the comparative testing of two or more products. The configuration used in this review can be seen below:
Processor: Intel Core i7 920 (2.66Ghz)

Operating System: Microsoft Windows Vista Ultimate x64 SP1
I had no major issues setting the board up as everything was in it's logical and optimal location. I did have some concerns of the memory slots positioning as this is perilously close to the CPU socket making the choice of CPU cooler very difficult. Our test heatsink, the OCZ Gladiator fitted with ease, as did its backplate but I do worry for anyone fitting anything bigger as this would most certainly clash with at least the first memory slot. It is however doubtful that a massive cooler would be fitted in a small case anyway so this may be a non-issue but it is worth pointing out to potential buyers. 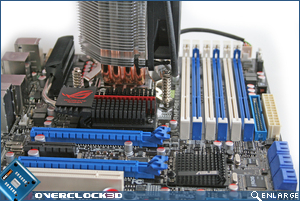 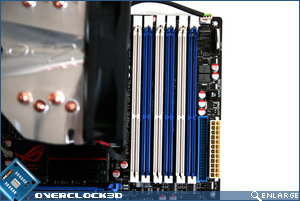 During the testing of the setup above, special care was taken to ensure that the BIOS settings used matched whenever possible. A fresh install of Windows Vista was also used before the benchmarking began, with a full defrag of the hard drive once all the drivers and software were installed, preventing any possible performance issues due to leftover drivers from the previous motherboard installations. For the 3DMark and gaming tests a single card configuration was used.

Power consumption is an aspect often forgotten when it comes to enthusiast motherboards but in todays climate, with rising utility bills special consideration needs to be taken when choosing you components as over a period of time, one components can prove to be much more expensive than another over its lifetime.

Despite it's demure size, the Rampage II Gene still sucked plenty of watts from the PSU hitting the middle ground in comparison to our other boards on test. While the power consumption would no doubt decrease at idle with the use of the EPU engine we are assuming that this feature is not used by the end user.

Using a respectable Vcore of 1.40v, loadline calibration and Turbo technology enabled, the remainder of BIOS voltage settings were left in their stock state to ensure equality throughout the testing. 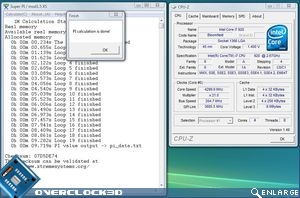 Oh my (insert expletive here) God! 4.3 Ghz is an amazing overclock, made even better that it comes from an mATX board and this is on air cooling! Beating all other motherboards we have tested to date, this is the maximum overclock we have achieved with our test i7 920 CPU. While I would say that our test CPU is from a good batch, it is not a cherry picked item and goes to show that motherboard choice, in this case the Rampage II Gene is all important when aiming for serious overclocks. It is also the highest Base clock we have achieved on an X58 motherboard. Gone are the restrictions of the magical 200 Bclk frequency. We did try higher but 205 was the best we could achieve, with 206 resulting in a non POST state. The overclock could perhaps have been pushed even further given more time and tweaking of the massive amount of settings available in the BIOS but I am in awe of the Gene's capability with just the standard tweaks applied.

The motherboard recovered from bad overclocks with ease and not once did I have to reset the CMOS. I should also point out that Vdrop and droop was pretty much non existent thanks to Asus's loadline calibration, making the voltages stable as a rock and thereby allowing a much more pleasant overclocking experience.
Returning the settings back to their stock state and disabling the Turbotech setting we started our suite of benchmarks. The Asus Rampage II Gene's stock speed on the CPU read 2670MHz instead of the correct value of 2666 MHz resulting in a 4MHz increase. Consideration to that fact should therefore be given to the following results and while 4MHz is not exactly a major difference it could have a very slight skew on the results...
«Prev 1 2 3 4 5 6 7 8 9 10 11 12 Next»

cl0ck_ed
Very, nice review. Wanted to see a higher base clock though, 220 would have been nice. Any body know how this compares to the DFI x58 jr board in terms of bclk overclocking?

1 thing I really like about the layout of the mobo is the consideration given to the cooling of the cpu - area. Really looks like they give u a nice amount of scope.

Amazes me how now memory areas seem more important than pci(e)(x) slots. U choose with ur preference here tho.

Still look at all the results for all the X58s and there aren't any across the board leaders. They all peak somewhere and drop elsewhere.

Be interesting to adopt a price per performance on the 3dmark Vantage stat - seeing as it's the lesser of the evils when thinking of artificial gaming/cost stats.

For the cash, the package seems poor to me. Many other manufacturers will atleast give u a full bank of sata cables - with locks, for example.

Meh, I'd stick with a Gigabyte to this point.

Awaiting the next ASUS mobo to come out in a month or so I guess.Quote

I think I'm in love

, to put so many features into that limited space is pretty awesome. The downer is the package. I've used to something else with ASUS Rampage mobo's, as I'm more than satisfied with my Rampage formula.

Maybe if I decide to build me a i7 platform PC this MB would without a doubt be my fist choice to buy.

Let's see what time brings, but for now this is the master MB for me

Sleekit
I wish i could buy one! Having a compact gaming rig *dreams*Quote
Reply