From the outset the Rampage II Gene sets the stage for something explosive with the vibrant packaging. Dominated by the ROG colour scheme and font, the matt red packaging is very striking in appearance with only the compatibility emblems from Intel, ATI and Nvidia breaking up the red theme. Flipping the box over, we find the specification along with some key features of the board such as CPU level up and MemOK!. 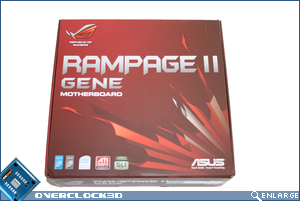 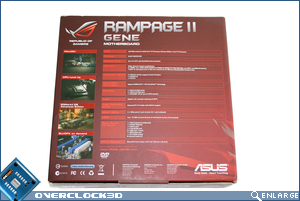 Lifting the lid of the outer sleeve, Asus go into greater details explaining that MemOK! is a memory rescue tool that will patch memory issues that result in a non-boot scenario. With MemOK Asus claim they have drastically reduced this frustrating aspect as the tool determines failsafe settings. CPU level up is exactly what it says, it will 'level up' your CPU to a more expensive model to say a i7 940 or even an i7 965! In reality it will simply load in the default speeds for those CPU's and save you from messing around with different BIOS settings yourself, a lazy mans tool if you like. 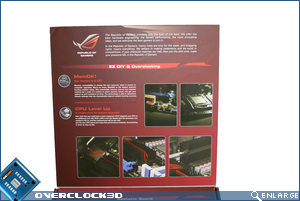 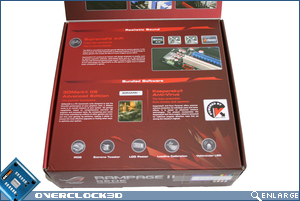 Opening up the box we are initially greeted with the motherboard itself which is covered with a plastic lid. The whole packaging should ensure that your kit arrives unscathed and I am, as always, impressed by Asus' attention and care in this matter. Under the motherboard is yet another compartment holding all the accessories which includes 2 SATA data cables, IDE cable, SLI bridge, I/O shield, driver CD, LCD poster, a comprehensive manual and even a few tie wraps to tidy your installation up when complete. Strangely, Asus also included two huge 'explosion' stickers but I would imagine that few  people would make use of these as they are a little tacky but then stickers normally are! 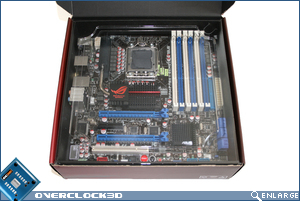 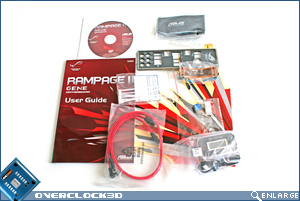 Moving on to the board itself the first thing you notice is how small it is. Being Micro ATX, it appears that the bottom section of the motherboard has been sliced away and that, in effect, is exactly what has been done. Shrinking the full number (usually 7 or 8) PCI/e slots down to just 4 has enabled Asus to make the board much smaller than the ATX standard. At first glance it appears that the ROG features have not diminished with SLI and Crossfire compatibility at the full 16x PCIe thanks to the PCIe slots. X-FI is still here too albeit in an on-board format and with six SATA ports it appears this is board could trump some full fat ATX motherboards for features. 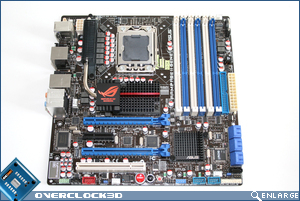 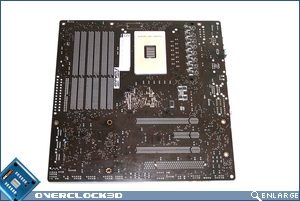 Rather than spacing the Mosfets around the left and top positions of the CPU socket, Asus crammed them all under an aluminium heatsink to the left of the socket. The socket area still looks very busy thanks to the numerous solid capacitors and the ram slots being placed close to the socket. The power delivery is still 16 phase and uses the Asus EPU engine to drop the power delivery down to 8, shaving the power consumption of the board when idle. A nice touch to the ROG Gene is the Memory slots. Rather than have security clips on both ends of the memory slot, Asus have designed a nice feature that still allows the satisfying 'click' when installing the memory without the need to 'clip the memory in place. This will prevent any clearance issues with the top GPU card and is a well thought out feature of the board, something I hope to see more of in future releases. 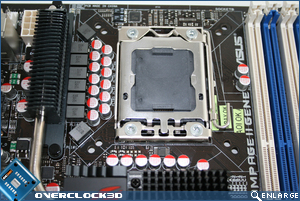 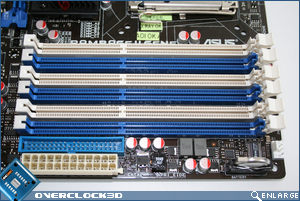 The PCI area of the board is concise as you would expect from a mATX motherboard. With just 2x PCIe 16x slots, a 4x PCIe and a standard PCI slot you will have to plan your expansion card purchases carefully. With both PCIe 16x slots filled with dual slot cards, no other expansion is available. This is not a fault of Asus though as it is unavoidable by it's very design, however it is worthy of consideration. The bottom area of the board is as feature packed as it's bigger twin, the Rampage II. Removable BIOS chip, Firewire, 3 USB expansion ports, power, reset and MemOK! buttons finishing off with Asus' ingenious Q-connector allowing you to fit the motherboard headers to a connector before attaching it to the motherboard, saving both time and frustration. 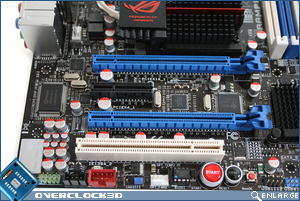 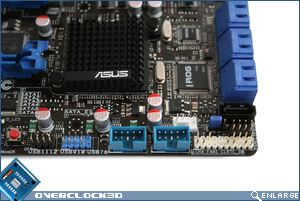 Asus have thoughtfully made all the SATA ports of the ICH10R controller right angled so there should be no clearance issues blocked by a full length GPU or two. The connectors are also of snap lock design should you have compatible SATA cables (not included by Asus - just the standard ones here I'm afraid). The start and reset buttons look like something from a dragster where as the MemOK button looks like more of an afterthought. Both the power and reset button light up but the MemOK button does not. 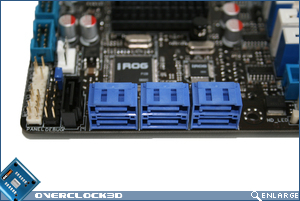 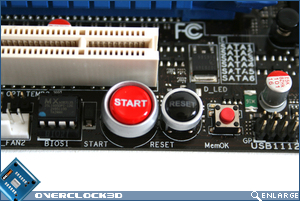 The I/O area is trimmed back but still affords all the essentials. a PS/2 Keyboard port is still clinging on for dear life and I would have preferred to see this feature gone now with the addition of a couple of extra USB ports over the included six It is possible to expand the USB headers to a maximum of 12 with the use of the internal headers but sadly Asus did not include a bracket for such expansion.  Fire wire and eSATA are available as is a handy Clr CMOS button should you get over ambitious with the overclocking. Finally we arrive at the on-board SuperemeFX X-FI. While other ROG board feature a separate riser card for audio, the Gene does not have the spare PCI space so instead of adding a cheap Realtek substitute, Asus have incorporated the X-FI chip on-board. The Supreme FX is not the best sound solution out there but it is certainly suitable for gaming, especially with EAX 4.0 / Alchemy emulation. 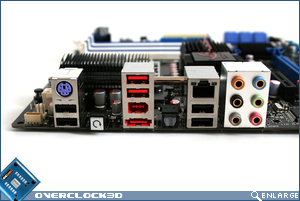 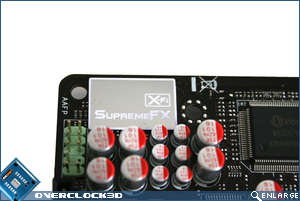 As you would expect from a ROG motherboard, the cooling is very well designed (aesthetically at least). The anodised red and gun metal grey scheme is a treat to behold and with the patented 'pin-fin' design of the sink it should cool well. In testing however we found the Northbridge hit 70c easily which was very alarming. It did settle down a little when I put a fan over the area but 60c is still way too hot. 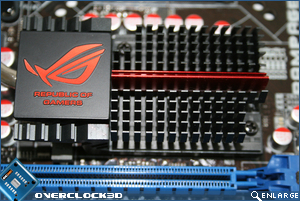 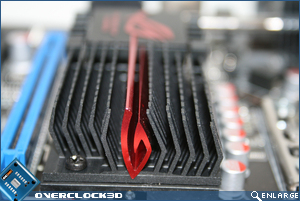 If you are not happy with the stock cooling (we weren't) you can always replace the 'pin fin' area with something more substantial like a waterblock perhaps. I do like the modular northbridges coming from manufacturers of late but I can't help feeling that people who have no intention of adding a waterblock are getting worse temps than they would with say a solid block of copper. The Southbridge block again uses the pin design of the Northbridge but is still made of aluminium. 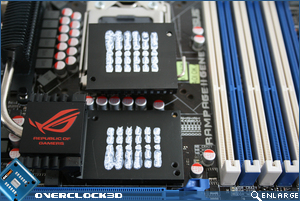 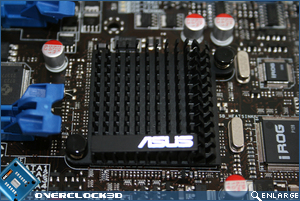 The Northbridge cooler is attached to the MOSFET heatsink via heatpipe which should help dissipate temperatures better. Taking the heatsink assembly off was easy enough with push-pins and spring loaded screws holding the Mosfet and Northbridge heatsinks to the motherboard respectively. 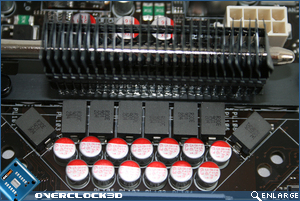 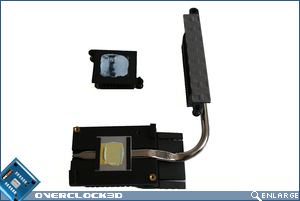 Strangely, Asus have used what appears to be both a thermal pad AND paste on the Northbridge heatsink. This is what might account for the high temperatures being reported. The Southbridge had the blue paste with no pad and the Mosfet had thermal tape used as a conductive barrier. 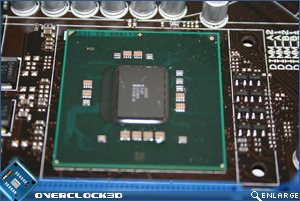 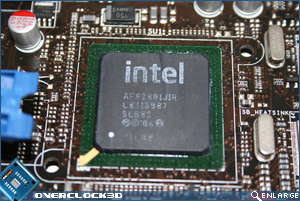 All in all an exceptional start to the review from Asus. The packaging is fantastic, the motherboard certainly looks the business and the features are what you would expect to find on a full size motherboard. My only reservation is the cooling of the board but we will see if this has any major effect on the stability or overclocking of the Asus Rampage II Gene in our Testing area. Firstly let's take a look at the BIOS which being a ROG should have a wealth of features to compliment the ROG name...
«Prev 1 2 3 4 5 6 7 8 9 10 11 12 Next»

cl0ck_ed
Very, nice review. Wanted to see a higher base clock though, 220 would have been nice. Any body know how this compares to the DFI x58 jr board in terms of bclk overclocking?

1 thing I really like about the layout of the mobo is the consideration given to the cooling of the cpu - area. Really looks like they give u a nice amount of scope.

Amazes me how now memory areas seem more important than pci(e)(x) slots. U choose with ur preference here tho.

Still look at all the results for all the X58s and there aren't any across the board leaders. They all peak somewhere and drop elsewhere.

Be interesting to adopt a price per performance on the 3dmark Vantage stat - seeing as it's the lesser of the evils when thinking of artificial gaming/cost stats.

For the cash, the package seems poor to me. Many other manufacturers will atleast give u a full bank of sata cables - with locks, for example.

Meh, I'd stick with a Gigabyte to this point.

Awaiting the next ASUS mobo to come out in a month or so I guess.Quote

I think I'm in love

, to put so many features into that limited space is pretty awesome. The downer is the package. I've used to something else with ASUS Rampage mobo's, as I'm more than satisfied with my Rampage formula.

Maybe if I decide to build me a i7 platform PC this MB would without a doubt be my fist choice to buy.

Let's see what time brings, but for now this is the master MB for me

Sleekit
I wish i could buy one! Having a compact gaming rig *dreams*Quote
Reply