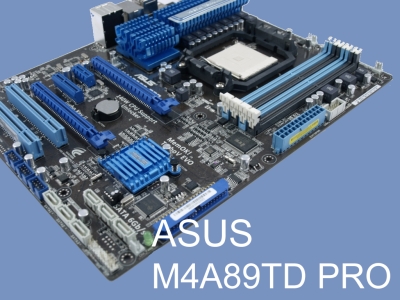 One month on since the release of AMD's flagship chipset and Hex Core processors, it's quite clear that today's performance users are gifted with a substantial choice of hardware to form the basis of their new machines. Despite the fact that AMD are using six cores to fight against the Intel Core i7, it still remains the case that the underdog is a valid choice for even the performance obsessed.

Our previous testing has already indicated that the range topping X6 1090T processor can pack a mighty punch under a variety of applications, but as always it's important to ensure that your system is well balanced in order to make the most of what it has to offer. In particular it is vital that you don't underplay the importance of motherboard selection. Thankfully you can rely on Overclock3D to test just about any worthwhile set of components to exhaustion. Today we'll be putting Asus' M4A89TD PRO Motherboard to the test.

Not to be confused with the M4A89GTD PRO, today's test motherboard features the new 890FX and SB850 core logic. Akin to it's predecessor, the flagship chipset boasts ATi CrossfireX Multi GPU capability with dual 16x/16x lane speeds. However minor changes have been made, resulting in the introduction of native SATA3 6.0Gbps support and the removal of Advanced Clock Calibration. Thankfully the removal of the latter feature is of no concern as Asus have implemented their very own core unlocking function. Enough chit chat for now, here are the full specifications of the M4A89TD PRO.

On face value, the M4A89TD PRO appears to have a lot in common with it's more "extreme" sibling, the Crosshair IV Formula. Let's investigate...

Steve-O-
There is little to no difference in performance from the GTD. Are the GTD and TD the same price? If not then why is there no performance increase over the "older" hardware?Quote

WanderingPanther
Didn't the Crosshair IV also have USB3.0 which seems absent from this board?

If I'm building a new rig I would want native 3.0. I just need to mug some grannnies first.Quote
Reply